Qualifying for the Indianapolis 500 has been delayed because of bad weather.

Ten minutes before it was scheduled to start, it was announced that Saturday qualifying was being put on indefinite hold because of bad weather. Three minutes into the scheduled session, the Brickyard was hit by a storm.

The cars were sent back to the garage area, and it's unclear what time qualifying will get underway.

Saturday's qualifying involves all 33 drivers making a four-lap qualifying run, with the chance to make subsequent attempts either by scrubbing the previous time and gaining priority to get back onto the track via the 'fast lane', or by retaining their time and waiting until there's a gap in the queue to be able to run.

Qualifying was due to run until 1800 local time, and the bad weather will have an impact on the number of runs that can be fitted in.

The top nine drivers today go into Sunday's 'Fast Nine Shootout to decide the front three rows of the grid', with the rest of the 33-car order set by a session that runs before it. 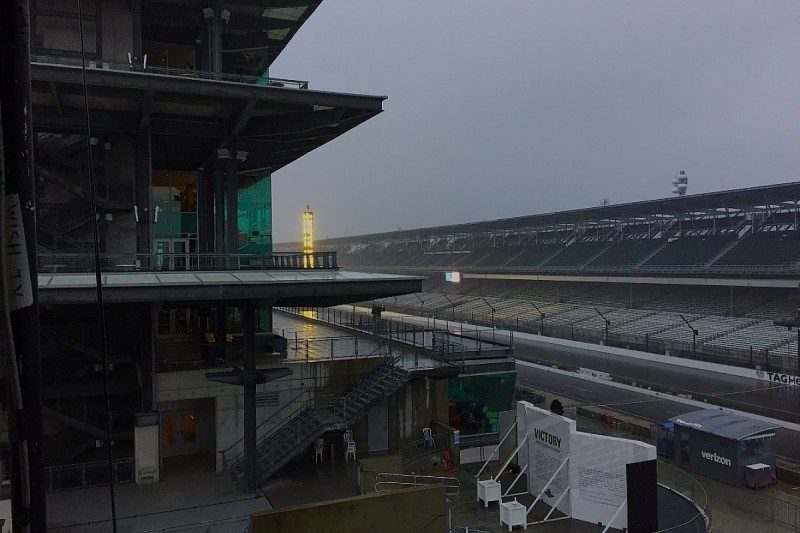 The heavy rain that hit the circuit stopped early in the afternoon, with track driers heading out in an attempt to get the track ready for day one of qualifying to take place.

The aim is now for all cars to get one four-lap qualifying run, which will decide the drivers who will reach tomorrow's Fast Nine Shootout, but this is expected to happen after 1600.

Qualifying was scheduled to end at 1800 today, but this will be extended to allow all 33 drivers a run today.

Provided this happens, Sunday qualifying would then take place as planned.