Josef Newgarden had built a lead approaching nine seconds in the race, but Hinchcliffe's set-up proved to work better in traffic than the Penske driver's and helped elevate him from 11th to second.

With 40 laps remaining, Hinchcliffe passed the long-time race leader and pulled a gap - although that was eliminated when a caution was thrown for contact between Takuma Sato and Ed Carpenter with six laps remaining.

Schmidt Peterson Motorsports driver Hinchcliffe opted to remain on track on used tyres as Newgarden pitted for fresh rubber to make the most of a late restart.

But the pace car took the field to the flag before a restart could take place, handing Hinchcliffe victory.

"It was like the worst-case scenario," said Hinchcliffe. "You're leading the race by a couple seconds, everything is good and you see a yellow come out.

"Based on what we've seen before - we saw it at Phoenix [where Newgarden defeated Robert Wickens on fresher tyres], we've seen it at Iowa in the past - we weren't totally shocked that people took [the opportunity to pit].

"But when we were doing the maths in our head, there was still only a couple laps to go.

"We still had to get the lapped cars back through pitlane [for the wave-around] and we're thinking, 'I don't even know if we have time to go green'.

"It was a tough call, it really was, because we've seen it go the other way so many times, but ultimately the right call was made.

"If we had pitted from the lead and it didn't go green again, I wouldn't have slept for a week." 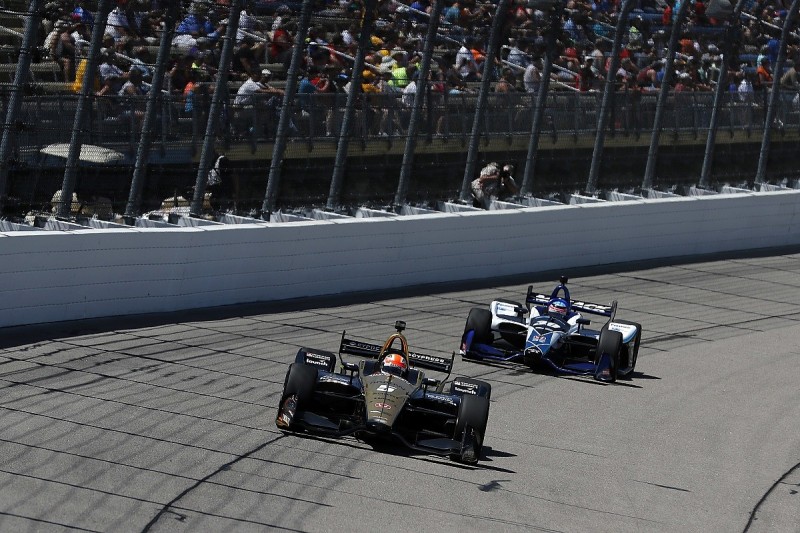 Hinchcliffe was joined on the podium by Spencer Pigot and Sato.

It was Pigot's first IndyCar podium and Sato's first in a difficult season for Rahal Letterman Lanigan Racing.

Hinchcliffe suggested such turnarounds would be impossible in Formula 1.

That's what makes it [IndyCar] so interesting," he said. "You can have a bad road course car, but that doesn't mean you're going to have a bad season.

"If you race in Formula 1 and you've got a bad road course car, you're screwed. You can still come here and have a completely different kind of race.

"It really is part of what throws up some surprise results sometimes in our series and just makes it a little more exciting.

"It's not the four or five guys winning every race, and that's what I love about this series.

"How you motivate yourself to get up on Sunday morning when you know 12th is a win for you, I just don't get it."