A red flag late on, caused by contact between Takuma Sato and Will Power, led to a three-lap sprint to the flag with a lead group encompassing Rahal, Tony Kanaan, Marco Andretti, Juan Pablo Montoya, Ryan Briscoe and Ryan Hunter-Reay.

The battle lasted mere moments as Briscoe and Hunter-Reay made contact, launching the former into the air (pictured below) and spewing debris across the start/finish line.

Both drivers were unhurt, as Sato and Power were in their crash, though Power was among those heavily critical of the pack-style racing seen throughout the 500-mile race.

Rahal finished the final caution lap to win the race ahead of Kanaan and Andretti, recovering from an earlier setback when he left the pits with the fuel hose attached.

The victory was the first for the Rahal Letterman Lanigan driver since his shock victory with Newman/Haas in St Petersburg in 2008, just two races into the Champ Car/IndyCar merger.

Kanaan and Andretti had been first to take the lead away from polesitter Simon Pagenaud early on in the race, and a slow opening pitstop would further damage Pagenaud's victory hopes as Andretti established himself in first place.

As the race approached the halfway mark, drivers who would go on to play a huge part in the late drama emerged with Rahal, Power and Sato all joining the leading pack.

The continual battle for the top spot soon halted for the race's first caution as Helio Castroneves' shortlived lead ended with a crash into the barrier.

Rahal resumed the lead after that pause with Power proving his closest rival before the second full course caution arrived when CFH duo Ed Carpenter and Josef Newgarden came together.

The pack racing then became ever more tense into the final 50 laps before the pair of dramatic late incidents set up Rahal's return to the top step of the podium.

Behind the top three, Montoya stretched his championship lead with fourth place for Penske, followed by Ganassi's rookie Sage Karam. 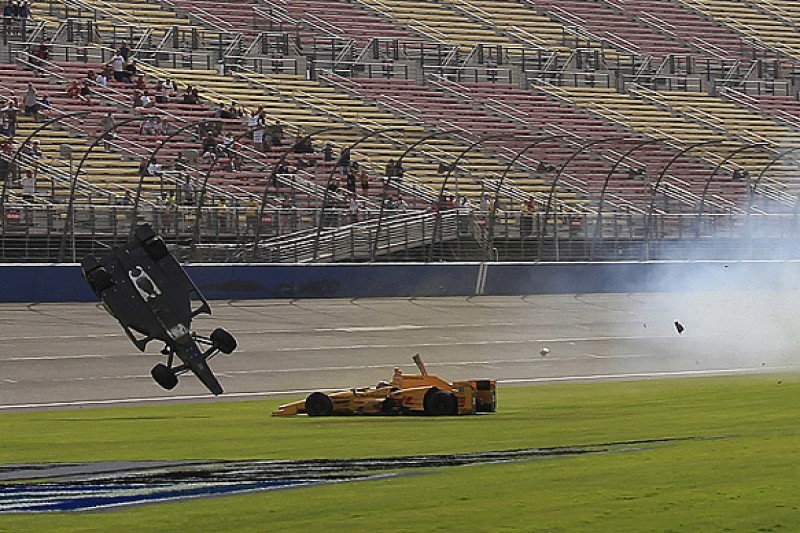