Scott Dixon’s latest IndyCar triumph at Texas Motor Speedway means he has scored at least one victory in 19 different seasons and moves one behind Mario Andretti on the all-time win tally.

Dixon dominated the Texas opener, leading almost all of the race and keeping clear of a late attack from Scott McLaughlin, who impressed on his oval debut to take second place.

Perhaps most remarkably, Dixon's success in the first race of the Texas Motor Speedway double-header means he has become the first driver to score consecutive IndyCar wins in the track’s 25-year history in the series, and brings his career wins tally at the 1.5-mile Fort Worth circuit to five.

Asked what it would mean to match Andretti – on 52 wins, second in the all-time list behind AJ Foyt’s 67 – having just claimed a win for a 19th different season, Dixon responded: “They sound amazing. For me I never thought I'd be in this position.

“I had big dreams. Obviously I would always dream about winning an IndyCar championship or something along those lines. But obviously between how you dream and reality can be very different many times.”

All but one of Dixon’s 51 victories has come while driving for Chip Ganassi Racing, and he is also a six-time IndyCar champion.

“Chip and I spoke just after this race,” said Dixon. “He was like, ‘Man, congrats on the 19 seasons. I was like, ‘Without you, this wouldn't be possible, so thank you’. That goes for every team member on this team. It's a lot of people. My wife, my family.

“It feels amazing to be in this position. You just never want it to end. We want to go back-to-back and try to tie Mario tomorrow. I'm sure that's not exactly what he wants to see!

“We'll keep our heads down. It's extremely tough. This season has been one of the toughest starts I think for a lot of us just with how tight the competition is. It's never easy, man. You got to keep working at it.” 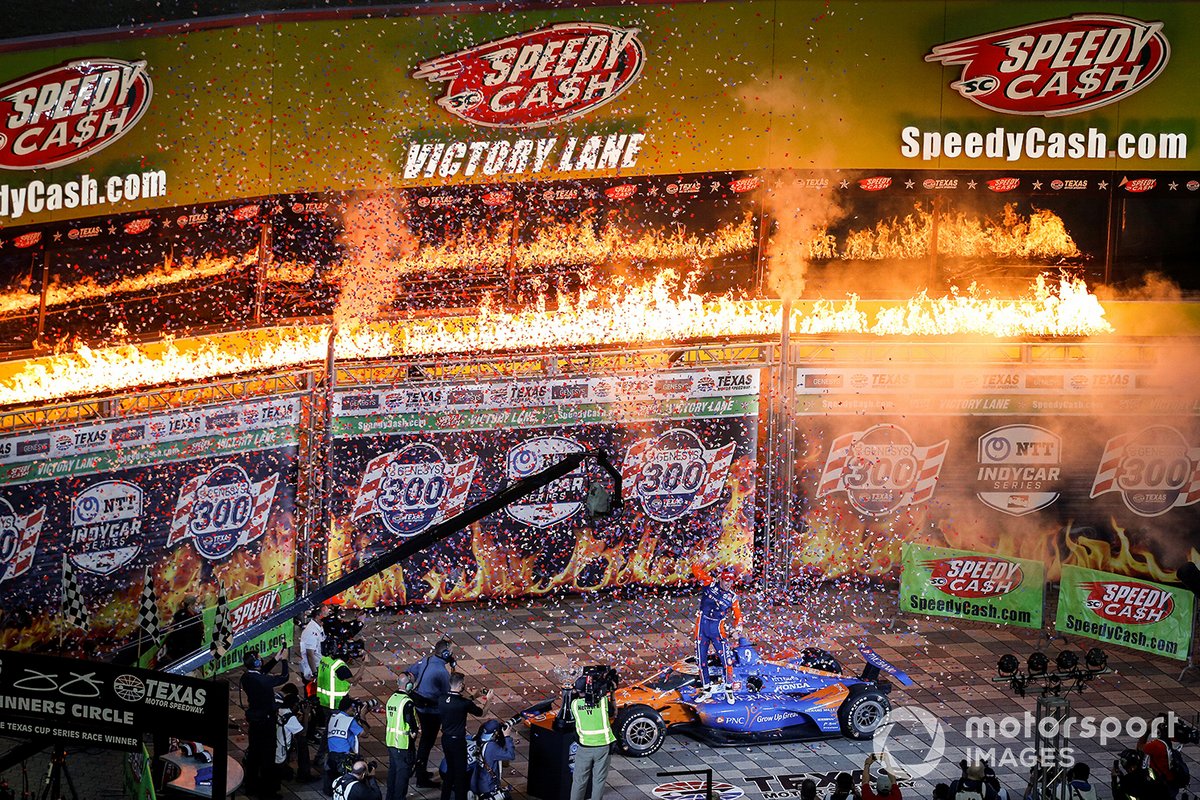 Dixon was joined on the podium in the Texas Motor Speedway opener by fellow Kiwi McLaughlin, who scored his first IndyCar podium on his oval debut.

Asked what it meant to see his compatriot finish runner-up, Dixon was delighted to see McLaughlin adapt so quickly in his first full IndyCar campaign.

“It was really cool to look at that monitor on my steering wheel and see that it was the #3 car [who was closest]," he said.

“I haven't even got to see Scott yet, but definitely a congratulations to him. That was a tremendous run. [He was] definitely very fast. There wasn't much [tyre] deg at the end of the race there, especially with the cooler conditions. Exit of Turn 2 just became a very long straight until you got back to Turn 1.

“Definitely didn't want him to get too close to get that big run through T3 and T4, as I think you could definitely pull the pass off, as we'd seen earlier in the race.

“Huge result for a race for a couple of Kiwis, which is great to see.

“In pre-season, people were like, ‘How do you feel about having another Kiwi on the grid?’ I've been waiting 20 years for it!

“It's great to see him over here. He's a massive talent. He's going to have a lot of victories, man. I have to try to hold him off while I can."

Dixon entered the race as favourite, given the #9 Chip Ganassi’s domination at this track last year, and when asked how close his set-up was to last year, Dixon said only small tweaks were needed despite the truncated preparation after qualifying was cancelled due to the poor weather.

“I think there's always off-season developments. There were definitely four or five items that all of us needed to get through in that 75-minute practice which helped decide some of the changes on the car," he explained.

“Ultimately [the set-ups were] fairly close [to last year]. You don't want to step too far out of the box. Our car was very dominant last year. Actually all three of us were very good in the race.

“I think a lot of the field got closer. I think that was due to the ambient conditions.

“Firestone brought a better tyre than last year. Last year with COVID created some problems with them for manufacturing. It was kind of an oddball set they brought last year. This year I think everybody had a lot more grip so it made it a little bit easier.”