As was the case on Saturday, the race featured an array of overlapping strategies, but Castroneves followed a relatively straightforward one of starting on red tyres and cycling through harder blacks for the rest of the race to put himself into position for the win.

A long stint under greens during the second half of the race allowed the Brazilian to open a lead of 13 seconds, although that was erased by a string of caution periods, the first caused by Sebastien Bourdais hitting the wall, and the second by polesitter Takuma Sato being spun into the barrier by Marco Andretti.

Those allowed Power to close up on his team-mate, but Castroneves nailed both restarts and crossed the line with a 1.6s advantage.

"[Finishing second in] the Indy 500 just made us hungrier," said Castroneves.

"We want this championship so bad, and to win here where I won for the first time is awesome.

"The car was just so fast. I missed an opportunity yesterday, the strategy just didn't work for us but today was perfect."

Power did well to be in contention at all considering that he was forced to serve a drive-through penalty early on for unavoidable contact.

It was a fair punishment - he lunged to the inside of Simon Pagenaud at Turn 3, then decided to ride the kerb and try to pass Josef Newgarden as well.

It didn't work, and the resultant contact sent Newgarden spinning into the path of Graham Rahal, who in turn was rear-ended by Justin Wilson.

The Australian did not push his team-mate hard on the final restarts, and said that he was being deliberately conservative. 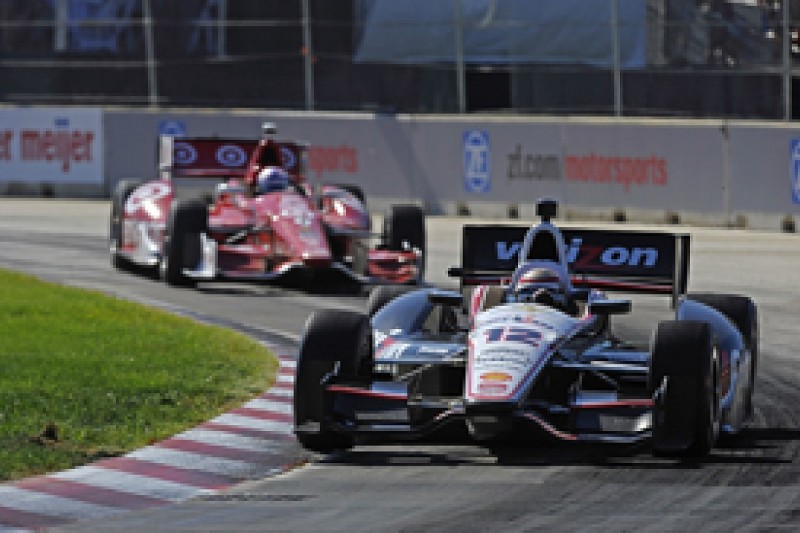 "It was a fantastic weekend," he said.

"I have a feeling we could have won it if we didn't have the drive-through but I'll definitely take second.

The result was made even better for Penske by the fact that it moved Power and Castroneves into first and second in the points table; a situation helped further by Ryan Hunter-Reay having another miserable day that began with a qualifying crash and ended with an electrical failure.

Charlie Kimball did a superb job to drive from 20th to third, the Ganassi driver surviving close encounters with team-mate Scott Dixon and James Hinchcliffe in the final laps.

"It's a great day, to come back from a real disappointing qualifying this morning to be third and have all four Ganassi cars in the top 10," he said.

"I knew we had a fast car; we just had to put the hammer down in clean air and try to move forward.

"When I had clean air, I had the car to make up the positions."