Starting from pole, Rahal - who had predicted that he could dominate this weekend - absorbed pressure from Penske's Helio Castroneves early on.

Castroneves attempted to surpass Rahal with a three-stop strategy, and assumed the lead after the Rahal Letterman Lanigan driver made the first of his two pitstops.

A yellow on lap 27 of 70 - called when Charlie Kimball spun his Ganassi Dallara-Honda just after Turn 3 avoiding Conor Daly's failing AJ Foyt car - didn't help the three-stoppers get away and Rahal reclaimed the lead when Castroneves made his second pit visit. 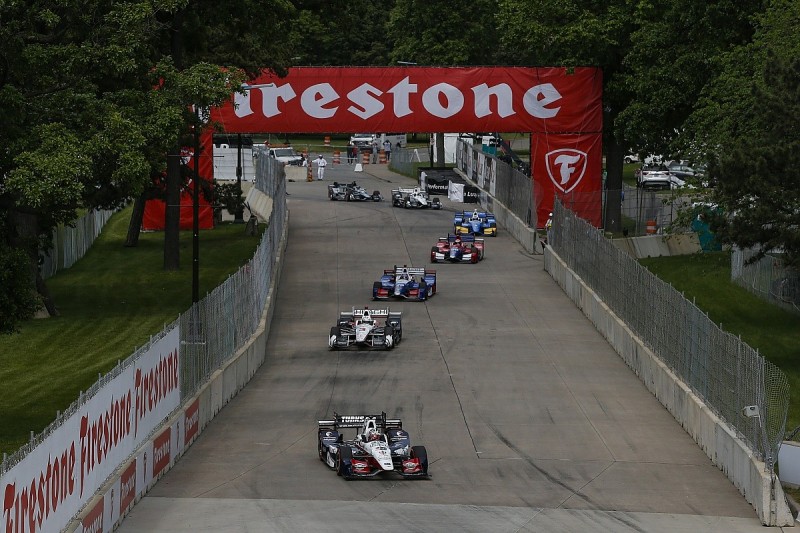 Rahal fell behind only Scott Dixon when he pitted for the final time with 22 laps to go, and once Dixon made his last call for fuel and tyres just two laps later, Rahal was unchallenged in the closing stages to claim a dominant victory at Belle Isle.

Dixon - despite an injury to his left ankle as a result of his horrific Indianapolis 500 crash - was able to work his way through the field to second thanks to some smart strategic calls by the Ganassi team and moved into the championship lead.

Strategy worked out even better for James Hinchcliffe, who rounded out the top three despite spinning at the race's first corner.

Hinchcliffe took advantage of his own caution to catch the rest of the field and pit early.

The Schmidt Peterson driver proceeded to make up for lost time by carving through the field, before jumping Alexander Rossi in the final pitstops.

Rossi spent a long period of the race in second, but a slower second stop put paid to any chances of victory, and he was passed by Josef Newgarden for fourth in the dying laps of the race.

Newgarden was the only man to succeed with a three-stop tactic, benefiting from taking stop number two during the Kimball/Daly caution.

Mikhail Aleshin recovered from qualifying a lowly 20th, having had a lap disallowed for a yellow flag infringement, to secure sixth by following the same strategy as team-mate Hinchcliffe.

Castroneves was unable to make the three-stop strategy work, only claiming seventh after Indy 500 winner Takuma Sato made a late pitstop and dropped to eighth place.

Ed Jones followed up his impressive performance at Indianapolis last weekend with ninth despite starting on the final row, finishing ahead of Spencer Pigot - who assumed 10th after Max Chilton had to make a late stop.

Simon Pagenaud and Will Power rounded out a disappointing day for Team Penske by finishing 16th and 18th respectively, both stymied by three-stopping, while debutant Esteban Gutierrez finished 19th for Dale Coyne Racing in his first IndyCar race.