Simona De Silvestro, who this weekend starts her first IndyCar road course race since 2015, says that the long layoff may actually help her re-learn the car.

De Silvestro made her return to IndyCar in last year’s Indianapolis 500 with Paretta Autosport, a female-forward team.

But for this year team owner Beth Paretta has elected to use the funding she has raised to run three IndyCar races – Road America this weekend, Mid-Ohio in July and Nashville in August – as she targets evolving the team into a full-time operation.

The current IndyCar chassis is still basically the same as the last one she raced on a road course, the DW12, but much has changed.

When she finished fourth at the NOLA Motorsports Park in the 2015 Indy Grand Prix of Louisiana, De Silvestro’s Andretti Autosport car had the Honda aerokit. Since then the universal aerokit was introduced for 2018, and there have been weight distribution changes due to extra safety reinforcements – not least the aeroscreen.

Yet De Silvestro sees this lack of recent experience as potentially helpful, given that several experienced drivers struggled to find roadcourse setups they liked when the aeroscreen was added in 2020.

“But definitely with the aeroscreen it seems the behaviour of the car has changed quite a lot. Looking at the onboards, it looks different than how I used to drive it.

“To be honest at the moment, I haven't driven it. I'm a bit maybe overthinking a little bit. I need to go into the weekend and see what we got.

"The good thing is it's been quite a while. I think in a sense I won't really remember how it really felt like, so I can start from a blank sheet and work from there.

“I think a lot of the guys who have been running a lot, I think the aeroscreen changed a lot. I think they've been trying to get the feel they used to have without it. In that sense for me it's been so long that maybe I'll just hopefully adapt to it a little bit quicker.”

Nonetheless, she is tempering her expectations, pointing out that “I haven't done a really long race, like an IndyCar race in a while. I did GT last year where I think we were in the car for like 45 minutes.”

To that end, she added, “I think we have to be realistic. We have not tested. It's the middle of the season, all these guys and girls have been running half the season already. We need to see where we kind of stack up. 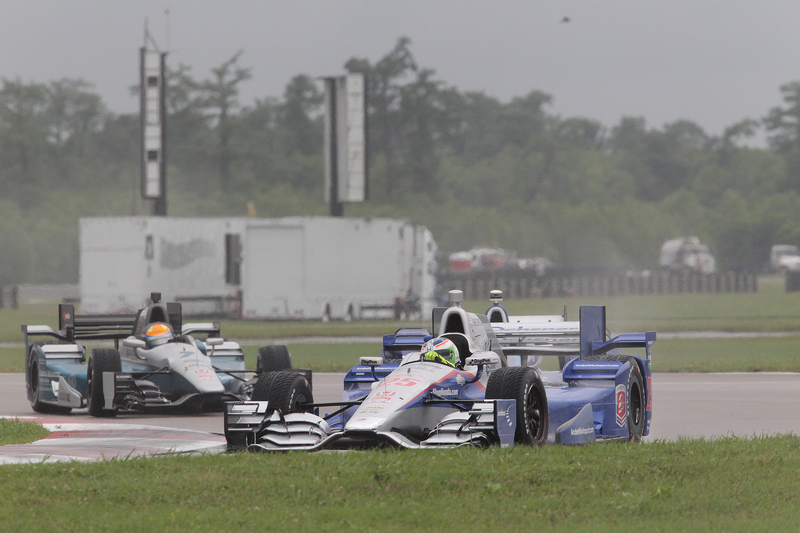 De Silvestro's last IndyCar start was at NOLA in 2015.

“I'm really looking forward to getting back in an IndyCar. So from that point of view I think I'll push quite hard to get up to speed as quickly as I can. I think if we do our job correctly, I think we can be on the competitive side for sure. I don't think we can win the race or be on the podium. I think that's really unrealistic.

“We just need to do our job correctly and just kind of keep chipping away at it, finish the race. I think if we do everything correctly, I think the race could be all right.”

While last year, Paretta Autosport partnered with Team Penske for its debut, this year the team’s technical alliance is with Ed Carpenter Racing, integrating with the third, part-time arm of the squad that runs the #33 car for team owner Ed Carpenter on the ovals, with Champ Car veteran John Gentilozzi on the engineering stand.

However, Paretta Autosport remains a ‘female-forward’ team, to encourage women to consider motorsport as a career. De Silvestro’s inside front tyre-changer in last year's 500 is now a junior mechanic at Team Penske, one of her colleagues has also joined Penske, while another has gone to NASCAR.

De Silvestro said: "There's a few that are coming back. Three of them left and got different opportunities, which I think is really positive. But I think what Beth really is going to try to do is find more girls that can kind of train with Carpenter, kind of build them in, giving them their first step into it. Hopefully they will grow enough within the team that we can start really running with those girls.

“But that will take a little bit of time now, especially with our new association with Carpenter. This is all kind of a work in progress. But hopefully with this year and having even more races next year or something like that, this is really kind of the first steps towards that goal.

“I think it's really important. I think what Beth has put together last year, just doing the Indy 500 with these women, seeing three of them really kind of taking off and doing some really important jobs on some other teams, I think it just really gives a lot of credit to her.

“I think if she wouldn't have put this program together, I don't think these women would be in those positions now. I think that's something really special. I think it's something that Beth can really be proud of.

“For me as well, I think the last seven years I've always tried to come back to IndyCar. It was really a struggle, to be honest, to get a seat or something like that. Trying really hard to do it because for me IndyCar is very special and I think it's something that really suits me, where I really wanted to race.

“She's an amazing person. I wouldn't be here without her… I think all of the women involved, myself, the other ones, I think we're pretty grateful for her really fighting for this and getting it going.”