Dixon qualified in eighth but struggled through most of the race and almost went two laps down before his team put him on an alternate strategy in the final stint.

The strategy paid off when Ed Carpenter crashed towards the end, as Dixon had stayed out when the frontrunners made their final pitstops under green-flag conditions and reclaim a lap, also effectively earning back a pitstop he had not taken earlier.

Dixon then emerged in sixth and climbed to second within the last 15 laps, but said his car behaviour had been puzzling.

"It was just one of those nights where we just really didn't have the pace," said Dixon, who is racing with tennis elbow and receiving therapy for it.

"We burned through the tyres really quickly. We tried adjusting the balance.

"I was really loose on the first one. The second one [had] lots of understeer...

"Huge credit to the team. They hung me out pretty long before the last caution."

He added: "All in all, considering how our race was going, we were actually probably going to be happy with a top 14 or 15, so that was pretty stellar.

"Tonight was just one of those things. I can only thank the team for what they did. I tried to hold on till the end and make the most of it. Yeah, we'll take it.

"We didn't have a perfect car at any point this weekend. "I feel we actually made some pretty good gains at the end of the final practice.

"But that was really bizarre, too - we didn't really change too much." 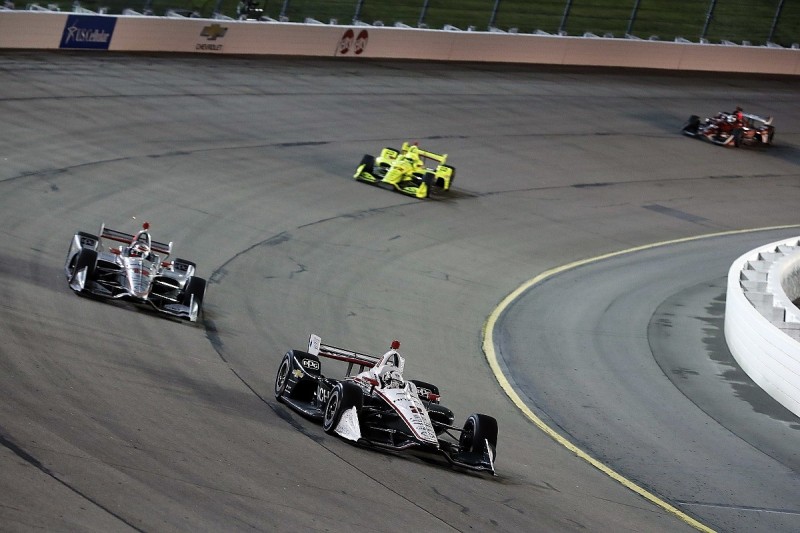 The result helped Dixon claw back some points on four of the five drivers ahead of him in the championship, with points' leader Josef Newgarden winning the race.

Newgarden holds a 29-point lead over Andretti Autosports driver Alexander Rossi, while Dixon is 98 points off the lead with five races remaining.