IndyCar's race at Barber has been pushed back to Monday, after running just 22 laps, almost half under yellow flag conditions due to heavy rain and wind

Josef Newgarden will lead the field to the green flag when the race resumes.

The Penske driver was fortunate to remain in the lead, having nearly lost control after he defended his lead on the restart following the first red flag due to the conditions.

But while Newgarden was able to correct his car superbly, his team-mate Will Power was not so fortunate.

Power was put under pressure by Dale Coyne Racing's Sebastien Bourdais and the Penske driver aquaplaned and careered into the pitwall on the long straight.

That brought out the third full-course caution of the race, as the first was mandatory for a wet start, and there were further nervy moments encapsulated by AJ Foyt Racing's Tony Kanaan briefly stopping on track.

IndyCar quickly returned to a red flag on lap 23 of 90 as Rahal Letterman Lanigan Racing's Graham Rahal radioed his team to describe the conditions as dangerous. 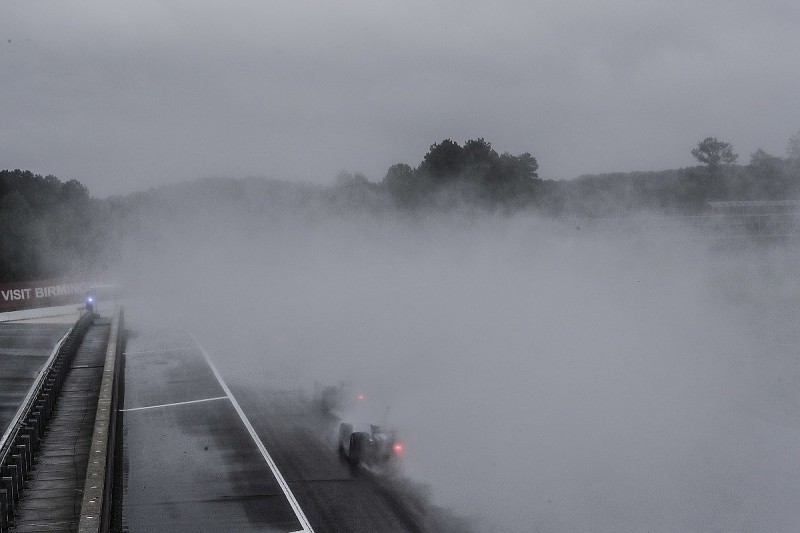 The series then waited in the hope that the weather would improve, with IndyCar rules allowing for a result to be called at half distance.

The wet weather meant that in the case of Barber, a result could be called after an hour of racing, although it failed to meet either criteria on Sunday evening.

When the race resumes, several drivers will be at an advantage by virtue of stopping under the second caution caused by Carlin's Charle Kimball, who claimed Ed Jones had pushed him off the track at the exit of Turn 17.

Notably, Penske's Simon Pagenaud stopped under the caution meaning he essentially had a free stop and is likely able to run to mid-distance without stopping again.

When the race restarts, Newgarden will lead Bourdais, Andretti's Ryan Hunter-Reay and Alexander Rossi to the flag.

Racing will resume at Barber at 11am local time.