Alonso: McLaren simply not fast enough to qualify for 2019 Indy 500

Fernando Alonso says he did everything he possibly could to qualify for the Indianapolis 500, but the McLaren IndyCar entry was simply never fast enough

The double Formula 1 world champion and his team, which was running largely independently bar an alliance with Carlin, ended up among the six entrants fighting for the final three spots on the Indy 500 grid on Sunday afternoon, having only been 31st fastest in first qualifying.

Alonso's practice week had been disrupted by reliability problems and a crash, and the McLaren Dallara-Chevrolet struggled for pace throughout.

He was bumped from the field by Kyle Kaiser, whose Juncos Racing team's participation at Indy had been in jeopardy following two sponsor pullouts and a practice crash.

"We were not fast, not only today; the whole event, we were struggling a little bit," said Alonso on Sunday night.

"But these four laps in qualifying especially are four laps where you are flat. There is not really anything big that you need to drive. 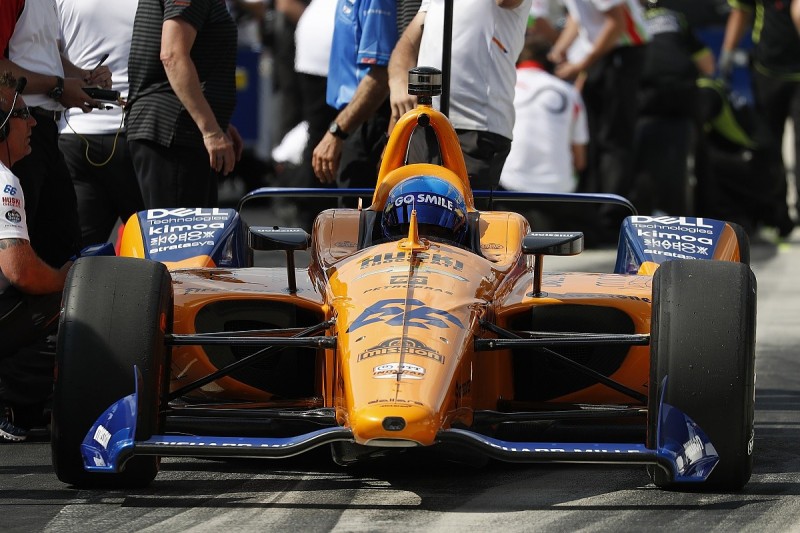 "As long as you don't lift, it's more or less the speed of the car that puts you in one position or another - or the time of the day.

"We had multiple attempts [on Saturday] and at different times. We should be OK if the car was quick enough, but we didn't manage to achieve that.

"I drove with a rear puncture - I only lifted off in the last lap because I could not make the corner."

McLaren did a deal to run Andretti Autosport set-ups, shock absorbers and dampers ahead of Sunday's last-gasp effort to make the field.

"We went out with an experiment that we did overnight," said Alonso. "We changed everything on the car because we thought that maybe we need something different to go into the race with some confidence.

"Because even if we were qualifying, we were not maybe in the right philosophy to race next Sunday.

"We went out not knowing what the car will do in Turn 1, but we're still flat. So we tried."