Carlin will "impress" and "surprise" people in its maiden IndyCar season because its single-seater pedigree will help it adapt quickly, according to 2018 driver Charlie Kimball

The British team confirmed its IndyCar programme late last year - it will operate a two-car entry for Kimball and Max Chilton - and completed its first test at Homestead this month.

It had previously competed in Indy Lights, and helped current Ganassi Racing driver Ed Jones to the drivers' title in 2016.

Team boss Trevor Carlin has warned that his outfit will likely struggle at first because it was late in putting its IndyCar programme together, but Kimball thinks it will quickly adapt to the series.

"I think a lot of people will be impressed and surprised at the level that Carlin brings to the IndyCar paddock," said Kimball.

"That'll be the biggest shock to a lot of teams and probably a lot of fans.

"To them, it's this new start-up team when in fact it's a successful, established tradition of a race team, [it's] just in a new formula."

Kimball said IndyCar's limit on testing did not dent his confidence in Carlin's debut season.

"The biggest challenge for both myself and for Carlin as we get ready for the start of the year is how little time there is," he said.

"There's very little track time, very few calendar days to work through all of the many, many details - some of them very small but very important to the on-track result.

"But I have every confidence that the team is up to that challenge, myself as well." 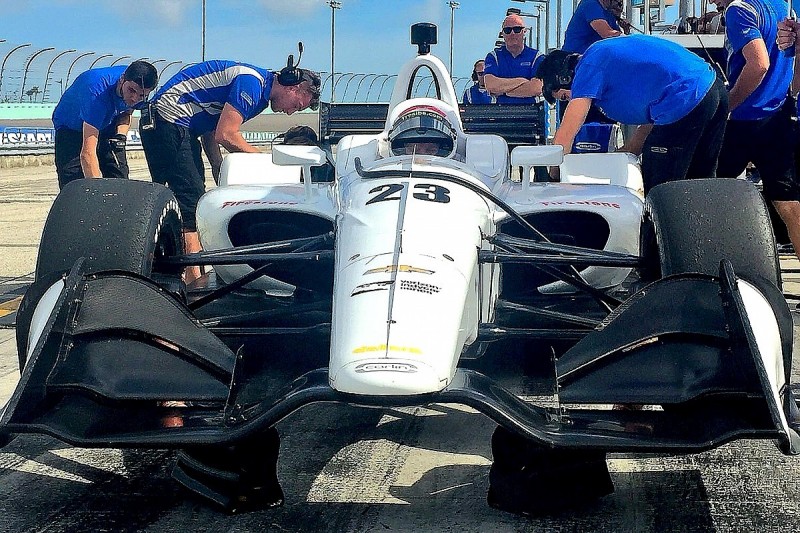 Kimball drove for Carlin for the first time last Monday before completing a full day at Sebring on Tuesday, alternating running with team-mate Chilton.

The American said his seven years in IndyCar, from which he has one win with Ganassi at Mid-Ohio in 2013 as well as five further podiums, should help the team get up to speed quickly.

"[The] change of landscape is really good," he said.

"I will be able to re-evaluate a lot of what I do as a driver, how I work with the team, what the team needs from me, how I'm able to contribute.

"They're new to IndyCar and so I hope my seven years of experience will allow them to shorten that learning curve."