The 2000s was a period of great success for British drivers in the US. In addition to Indianapolis 500 winners Dan Wheldon and Dario Franchitti, there was Champ Car race-winner Justin Wilson, while Jay Howard and Alex Lloyd (2006 and 2007) followed Mark Taylor (2003) in conquering the IRL-supporting Indy Pro series.

But for current British GT team boss Nathan Freke, the American Dream more closely resembled a nightmare as his stint in the championship now known as Indy Lights was curtailed three uncompetitive races into 2008.

After he’d “scraped through” his 2006 title-winning British Formula Ford campaign, beating future Le Mans winner Nick Tandy to the championship, Freke was frustrated in his attempts to move up the ladder by lack of budget. The 2007 season was one “pretty much of inactivity” while pitching in with running Century Motorsport, the team founded by father Clive while he was racing karts.

Freke was inspired to head Stateside for 2008 by a centre-spread advert in Autosport magazine, and contacted veteran promoter Roger Bailey – a fellow Briton – over the phone. Their conversation left Freke convinced that Michael Crawford Racing could meet his aspirations, and at a fee that was a quarter of the bigger teams – whose asking prices were way out of Freke’s league.

“[Bailey] was a very good salesman, it was just music to our ears,” he says.

Despite not having the full $250,000 budget – “I think we had about 60 or 70k, it was family money from re-mortgaged houses and all sorts of stuff” – Freke duly took the plunge in the expectation he could pay his way with prize money. But this was never a realistic proposition given the scale of the challenge.

“I didn’t really know very much about it, I probably didn’t do my due diligence if I’m being honest,” he admits. 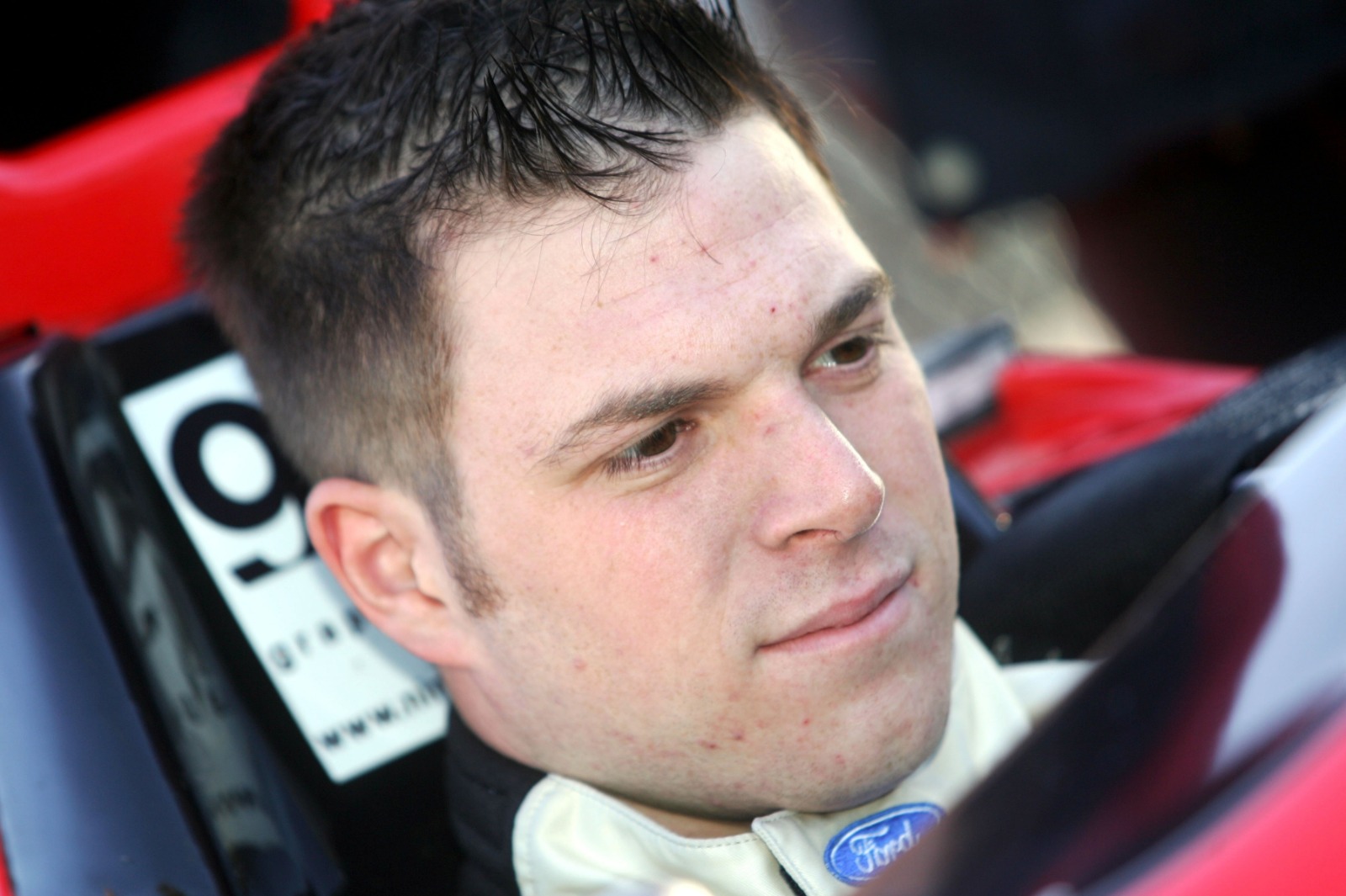 Freke’s decision to turn down an offer from computer game magnate Ian Hetherington of a free drive in the Porsche Carrera Cup GB was one he’d come to regret.

“I still had the single-seater dream in my eyes,” he recalls. “We decided that we had to have a go at this shot of making it, and it was now or never.”

After getting his oval rookie license at Nashville, Freke arrived to the first round at Homestead in buoyant mood. But while compatriot Dillon Battistini shone on his debut with victory for Panther, Freke’s weekend was one to forget, full of “weird issues”.

“It was quite obvious, even when you walked into the paddock, that we were not in the same league as the others,” he says. “It kind of went downhill from there really.”

"When you’re racing against teams that were asking for a million-dollar budget – the likes of Andretti Autosport, Sam Schmidt, and they’re trying to do it on 250k, you’re foolish to think that you can compete. And that was how to burn 60k in no time at all!" Nathan Freke

Gearbox issues which robbed him of track time in practice, combined with a fundamental handling problem, meant he was way off the pace.

In the race, he was lapped by a rival and “just understeered straight into the side of him”, when other cars would comfortably run three-wide for lap after lap.

“Homestead was an easy oval, it was easy-flat, but we were 8mph down on average speed despite being full throttle all the time,” he says. “Alarm bells were going off. I came in and said to the team, ‘What on earth is going on?’”

Next up was the St. Petersburg street track, where he was 22nd of 23 cars on the grid for race one. After a spin left him well down the order in the race, he took a morale-boosting eighth in race two, but was still considering throwing in the towel before a test at the famed Indianapolis Motor Speedway for the Indianapolis 500-supporting Freedom 100 race. 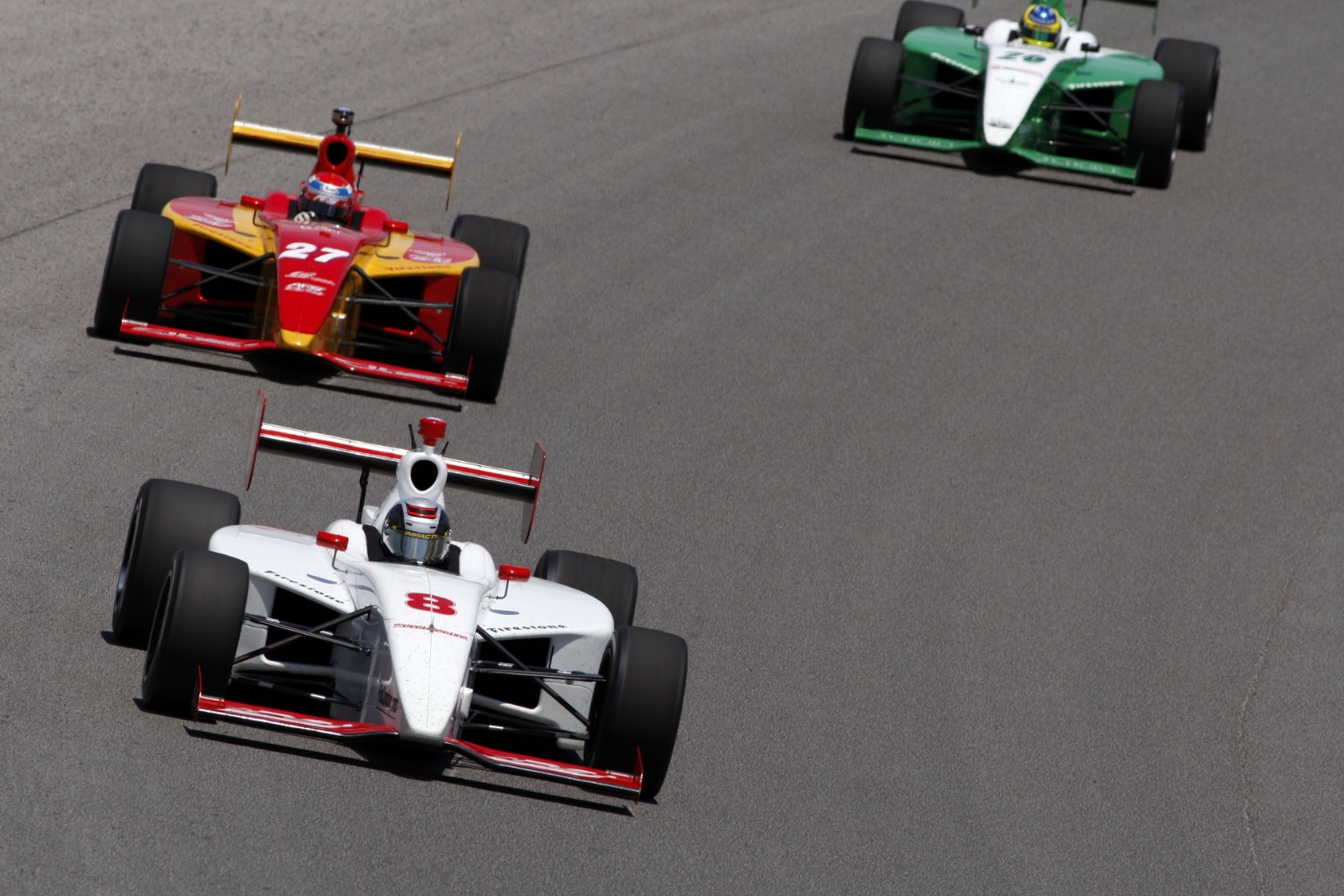 MCR hired a new engineer, which encouraged Freke to continue with the test. But the hoped-for overnight transformation in his fortunes didn’t materialise.

“All they were doing was trimming the car out more and more,” he says. “I came in and said, ‘I’m scared to drive this car, I feel like I’m going to crash into the wall at every single corner’. I told mum and dad, ‘We’re setting fire to our money here, it’s stupid’.”

Despite his family wanting to carry on – “everyone is completely emotionally invested, they’d booked their flights to come to the Indy 500 and watch me support it” – he’d never set foot in the car again.

“The engineer basically said, ‘You’re going to be developing this team for the rest of the year if you carry on’ and that was the end of that,” says Freke.

“The bottom line is when you’re racing against teams that were asking for a million-dollar budget – the likes of Andretti Autosport, Sam Schmidt, and they’re trying to do it on 250k, you’re foolish to think that you can compete. And that was how to burn 60k in no time at all!”

Returning to the UK, his single seater dreams dashed, Freke was on the verge of accepting that his entire driving career was over too. And after returning cap-in-hand “through gritted teeth” to Hetherington, the offer of a Porsche had sailed. But there was still scope for a reprieve, as Hetherington offered to buy him a car to the value of £50,000 if he could run it himself.

“We found a Ginetta G50 and we got a deal to buy the car and the entry [to the British Touring Car Championship-supporting G50 Cup],” recalls Freke. “We had no money, we did the media day because it was included, that’s the only testing we did. We turned up at the first round [at Brands Indy], we didn’t even have a quad to get the tyres to the grid.” 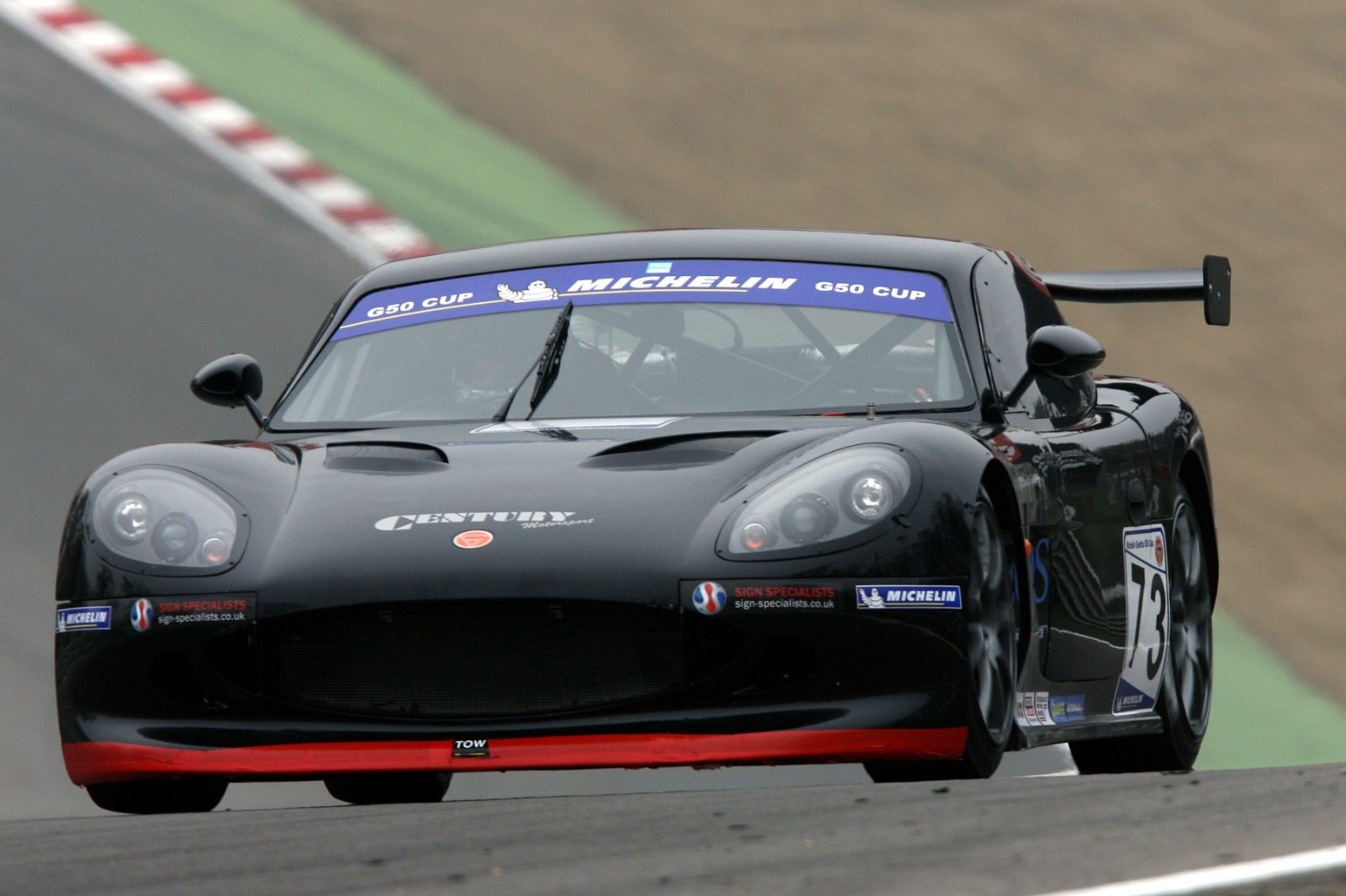 Freke's last resort was with a totally unsponsored car in the 2009 Ginetta G50 Cup, but he soon got results that resurrected his career

But a hat-trick of podium finishes prompted an injection of investment, after which Freke simply steamrollered the opposition, winning 15 times from the remaining 25 races – including a streak of seven on the trot. It established Freke and Century Motorsport as a Ginetta specialist, a position it retains today on the BTCC support bill.

Century has also branched out into the British GT championship, forging a successful relationship with BMW that has this year yielded a second clean sweep of GT4 teams’ and drivers’ titles in four years.

“He was the saviour of my racing career,” Freke says of Hetherington. “Without him, I 100% would not be racing, Century would 100% not be a Ginetta race team and where we are now, so I owe a tremendous amount to him.” 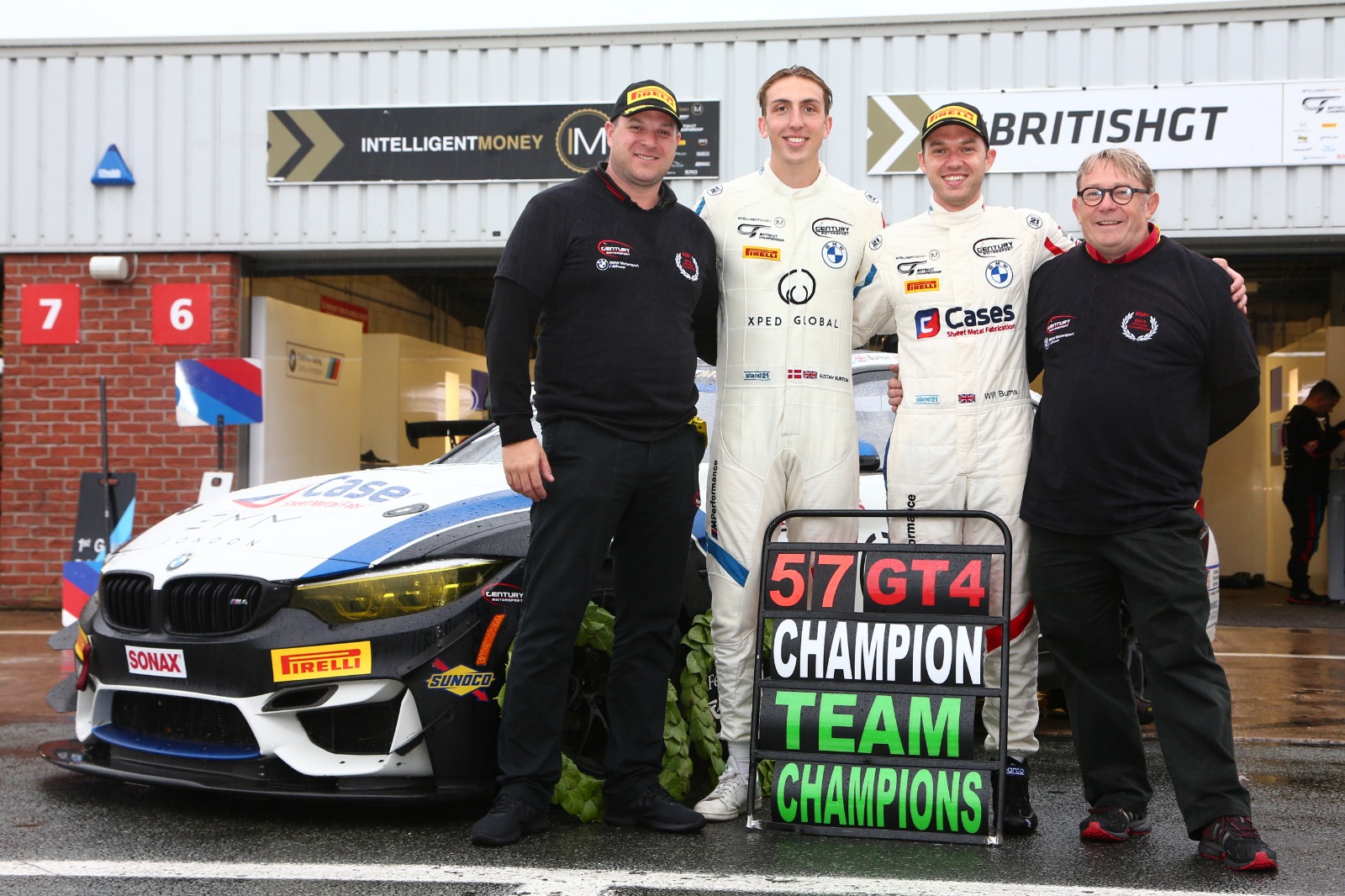 Freke (left), together with drivers Gus Burton and Will Burns and team manager Les Jones (right), led his Century Motorsport team to British GT4 drivers and teams' titles in 2021