Wayne Taylor Racing added the Sebring 12 Hours to its Daytona 24 Hours success in 2017, leading a Cadillac 1-2-3 in the American sportscar classic

Lynn took the lead after WTR opted to short-fuel the car in the eighth hour, leapfrogging ahead of the erstwhile leading #5 car of Filipe Albuquerque, Joao Barbosa and Christian Fittipaldi, having run an extra lap in its previous stints.

Albuquerque jumped ahead again when Lynn tripped over a GTD Audi, but the shoe was on the other foot in the next stint, when Jordan Taylor dived past Albuquerque when he got baulked by the #33 GTD Mercedes.

Ricky Taylor was installed for the final stint, against Barbosa in the #5 machine. Taylor was in complete control, taking a second IMSA victory in a row.

The second Action Express-run Cadillac, the #31 car, suffered a setback when Eric Curran rammed the dawdling Nissan DPi of Johannes van Overbeek at Turn 17, and it took four laps to restart the car. It regained enough time to finish third, but was never a factor in the lead battle.

The #85 JDC-Miller-run Oreca was the best of the LMP2 cars, but finished a distant fourth overall.

The challenge of the pole-sitting Rebellion-run Oreca withered from the end of Neel Jani's first stint, when a sequence of airgun, starter motor and alternator problems blighted its challenge. Both ESM Nissan DPi machines also fell out with mechanical woes.

The pole-sitting GTLM #67 Ford GT of Ryan Briscoe/Richard Westbrook/Scott Dixon did not take up its position on the grid due to an issue getting it started. But once going, the car tore through towards the front in just a couple of hours - albeit running off sequence to its rivals strategically.

In the latter stages, Ford stuck to its pit strategy plan, while Corvette, Ferrari and Porsche all pitted opportunistically under yellow in Hour 9.

It allowed the #3 Corvette to lead into the final hour, ahead of the #911 Porsche - with the trio of Fords giving chase. 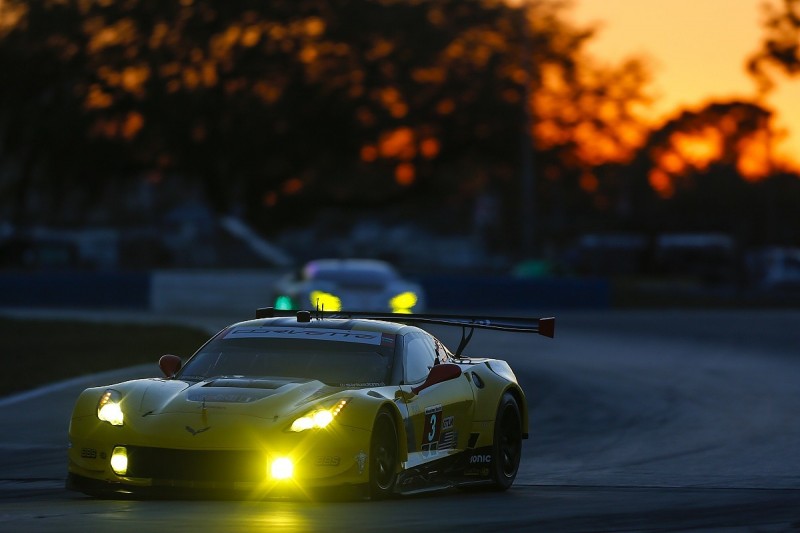 A full-course yellow with just over an hour to go added intrigue to the equation. The final pistop was a disaster for Porsche, as Patrick Pilet was stranded with a right-rear wheelgun failure that dropped him from second in class to fifth.

That put Corvette's Antonio Garcia in pole position for GTLM victory, with two Fords restarting right behind him. But Pilet was flying as the green flag flew, and he made short work of both Fords and set off after Garcia's Corvette.

But with potential victory in his sights, Pilet had to pit again with a left-front puncture, handing the race to Corvette and slumping to seventh.

The #66 Ford of Joey Hand, Dirk Muller and Sebastien Bourdais finished second, ahead of the Risi Ferrari and #67 Ford.

Performance Tech Motorsports led the PC category throughout, winning ahead of the Starworks #8 car.

Sebring 12 Hours: Cadillac 1-2 at halfway stage of the race