Campbell slotted the Pfaff Porsche 911 GT3 R up the inside of Antonio Garcia’s Corvette C8.R to claim second at the start, as polesitter Ross Gunn (Heart of Racing Aston Martin Vantage) took the lead from the start of the race.

Corvette Racing pitted Garcia so Jordan Taylor could take over on lap 26 and, by the time the remaining runners pitted, the yellow C8.R was out front by 10s having jumped the Heart of Racing Aston Martin. Jaminet, who had taken over the Pfaff Porsche, had also jumped Gunn’s HoR Aston.

Under a yellow flag with 75 minutes remaining, all five cars stopped, but now the Corvette needed more fuel as it had pitted early last time, so Taylor rejoined fourth in class - putting Jaminet’s Porsche and John Edwards - in for De Phillippi - in the BMW up front.

Following the restart Jaminet lost time behind off-strategy GTD cars, but with just under one hour remaining, he passed Andy Lally’s GTD Magnus Racing Aston to claim the overall lead.

That seemed to spur Taylor to cut loose in the Corvette, and passed both Ben Barnicoat’s Lexus and Edwards’ BMW to claim second, now three seconds behind the Pfaff Porsche.

However, just as he passed Lally’s GTD Aston Martin car, Taylor pitted - but for fuel only. A lap after that, Jaminet pitted and Pfaff fitted rear tires only, but he emerged still ahead of Taylor

Although they were behind the now-penalised HoR Aston Martin, whose second stop was disastrous and received a drive through for pit work outside its pitbox, Alex Riberas (in for Gunn) would need to make a third fuel stop. 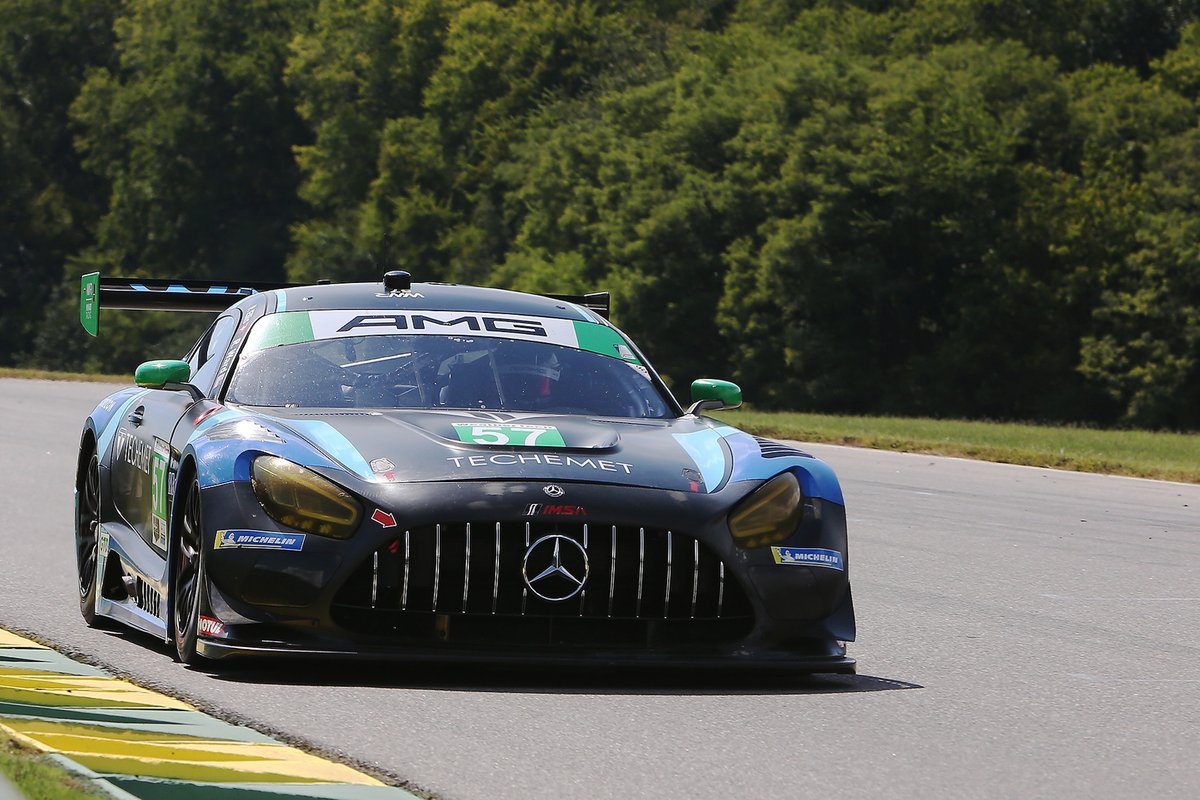 In the GTD class, Ward had converted his pole into a class lead from the start of the race, his Mercedes AMG GT3 leading Aidan Read’s Rick Ware Racing Acura NSX.

But Turner Motorsport immediately pitted its M4 after the 45 minute drive time for the amateur driver had elapsed, although Robby Foley stayed aboard. On fresh tyres and in clean air, the team had high hopes of jumping several cars he had been pursuing who were all still running on the Michelins on which they had qualified.

It prompted a number of teams to pit their cars, following suit to get their Pro drivers installed, but Winward Racing had a possible wheelgun failure - and so the Mercedes tumbled down the order.

Turner’s tactics and Foley’s driving had both proven perfect, and so the #96 BMW had leapt from sixth into the lead ahead of Read’s RWR Acura, with Ellis in the Winward Mercedes down in seventh.

That became sixth with Stevan McAleer (Team Korthoff Mercedes) pitted with a loose wheel, and Ellis tried to pass Maxime Martin’s Aston Martin through the Esses - but ran wide and collected a WeatherTech banner, dragging debris back onto the track. Ellis would only lose one spot, to Aaron Telitz’s Vasser Sullivan Lexus.

The debris caused the first full course yellow, and Turner would suffer for the same reason as Corvette in GTD Pro – the early first stop meant the M4 needed more fuel, and so Bill Auberlen who had replaced Foley was now sixth in class.

Off-strategy Andy Lally (Magnus Racing) and Katherine Legge (Hardpoint), were up front – ahead of the GTD Pro cars – but ‘net’ it was Bryan Sellers ahead of Telitz, Martin, Jeff Westphal and Ellis.

On the restart, Ellis ran into Westphal’s Lamborghini, pushing its right rear bodywork onto its tyre, causing the Carbahn Peregrine car to suffer a puncture.

Sellers and Telitz ran one second apart at the head of the pack (and at the front overall) with 30 minutes to go, while Ellis had demoted Auberlen, then Martin, to push the Winward Racing Mercedes into third, and try and close down the seven-second gap to the leaders.

Sellers pitted with 21 minutes to go, receiving left-side tires only but came behind Jan Heylen in the Wright Motorsports Porsche which had made its third stop back with the GTD Pro cars.

Telitz was in next time and Vasser Sullivan fuelled him for barely more than three seconds, and he emerged ahead of Heylen but only just ahead, and backing the Porsche toward Sellers.

With nine minutes to go, Ellis pitted the Mercedes from the lead for a splash of fuel, leaving Martin up front, but the Winward car emerged well ahead of the battle between Telitz, Heylen, and Sellers.

While Martin was trying to eke his HoR Aston’s fuel to the flag, but he had to cede the lead to the charging Ellis. However, such was his margin over Sellers that Martin was able to salvage a remarkable second, although he inevitably ran out of fuel on the slowdown lap.