The #31 Cadillac DPi.V-R moved into the lead right at the end of the first hour in wet conditions, with the heavy rain ensuring the first 40 minutes were run under caution.

From there, despite several safety car periods bunching up the pack over the course of the race, Nasr, Derani and Curran were able to maintain their advantage at the head of the field throughout.

The penultimate caution period, which came with two hours to go, erased what had been a 47 second advantage for Derani, who then had to survive one final restart in the final 15 minutes when the Turner Motorsports BMW M6 GT3 went off at Turn 3.

Jordan Taylor had picked off Brendon Hartley's AXR Cadillac at the previous restart to move the Daytona 24 Hours winning Wayne Taylor Racing Cadillac up to second, but when the green flag was shown with seven minutes to run Taylor was powerless to challenge Nasr.

The Brazilian eventually crossed the line 1.030s ahead of Taylor, who sealed second place in the Cadillac he shared with Renger van der Zande and newcomer Matthieu Vaxiviere.

Hartley and the full-timers in the #5 Cadillac, Joao Barbosa and Filipe Albuquerque, completed the podium a further 2.9s behind.

Both Acura ARX-05s struggled badly early on when the conditions were at their worst, but the #7 car shared by Rossi, Helio Castroneves and Ricky Taylor was able to recover from losing a lap.

The sister #6 car lost more ground with an electrical problem and then two changes of the rear deck, meaning Dane Cameron, Juan Pablo Montoya and Simon Pagenaud ended up nine laps down.

Completing the top five was the CORE autosport Nissan DPi, ahead of the best of the Mazda Team Joest cars - the #55 RT24-P of Harry Tincknell, Olivier Pla and Jonathan Bomarito.

Mazda's victory hopes were all but extinguished when an off for Bomarito before half-distance cost the car three laps, although subsequent caution periods meant the #55 finished only a lap down.

The sister #77 car dropped more than 100 laps off the lead with a battery issue that caused Timo Bernhard to stop out on track early in the third hour. 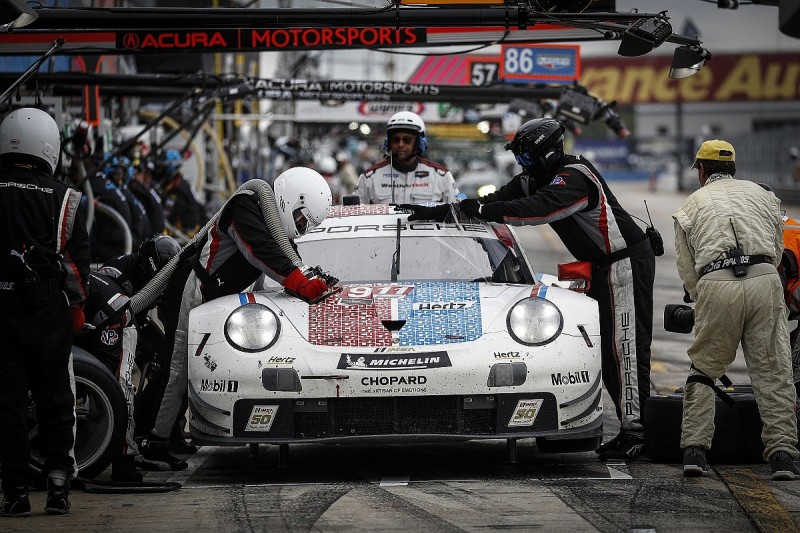 Victory in GTLM went to the #911 Porsche 911 RSR shared by Nick Tandy, Patrick Pilet and Frederic Makowiecki, which dropped off the lead lap in the wet early stages.

By half-distance, the trio had got back onto the lead lap, and after the penultimate caution Tandy vaulted from fourth to second in class behind the #67 Ford GT.

Ryan Briscoe was tasked with holding off Tandy, but the Australian slipped behind at the start of the final hour and then spun trying to navigate traffic after the final restart, making contact with Andy Lally's Magnus Racing Lamborghini.

That promoted the #66 Ford GT of Sebastien Bourdais, Dirk Muller and Joey Hand to second at the finish, ahead of the #3 Corvette C7.R of Antonio Garcia, Jan Magnussen and Mike Rockenfeller.

BMW's top finisher was the #24 car of John Edwards, Jesse Krohn and Philipp Eng, ahead of the second of the Porsches, the #912, and the #67 Ford shared by Briscoe, Scott Dixon and Richard Westbrook.

Corvette's #4 entry ended up nine laps down due to halfshaft and alternator problems. 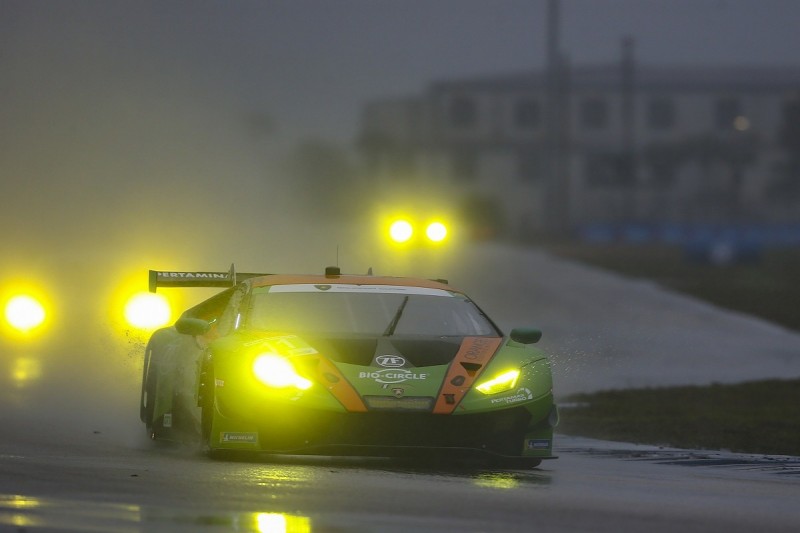 Bortolotti was split from fellow Lamborghini driver Lally by fewer than three seconds at the finish, with Lally surviving his late brush with Briscoe's Ford to hold on to the runner-up spot in the entry he shared with John Potter and Spencer Pumpelly.

Class honours in LMP2 went to the Performance Tech ORECA crewed by Kyle Masson, Cameron Cassels and Andrew Evans, 13 laps up on its sole class opponent, the PR1/Mathiasen ORECA.