Sharp was punted into the gravel trap at Turn 10 by Chris Miller towards the end of the fourth hour, but Porsche LMP1 star Hartley anchored a remarkable recovery for Extreme Speed Motorsports.

The #2 Nissan's cause was aided by its sister car and an Action Express Racing Cadillac serving penalties in the final half hour of the race.

Pipo Derani's #22 ESM Nissan had already lost time when Bruno Senna spun while being pressured by Helio Castroneves, who was trying to recover ground Penske ceded early on because of an errant backmarker.

Dirani was then blamed for sending Ryan Briscoe's Ford GT off course while holding the lead in the final stint and received a drive-through penalty.

Meanwhile, Filipe Albuquerque in the #5 Action Express Cadillac was issued a stop-and-hold penalty for ushering team-mate Dane Cameron off the track during the final restart.

He then had to serve another drive-through penalty for responding too late to the one before.

Derani and Albuquerque were left to finish fourth and fifth respectively, behind Cameron, Eric Curran and Mike Conway in the #31 Action Express Cadillac and the Team Penske ORECA.

Cameron and Curran were the closest challengers to the Wayne Taylor Racing-run Taylor brothers, who clinched the crown simply by starting a race in which their #10 Cadillac retired with engine failure soon after Ryan Hunter-Reay took over in the third hour.

Castroneves qualified on pole for Penske's toe-in-the-water race in the LMP2 car, and was running second in the opening hour when Matteo Cressoni hit the wet grass in his Scuderia Corsa Ferrari and lost control, sending himself and Castroneves into the gravel trap at the end of the back straight. 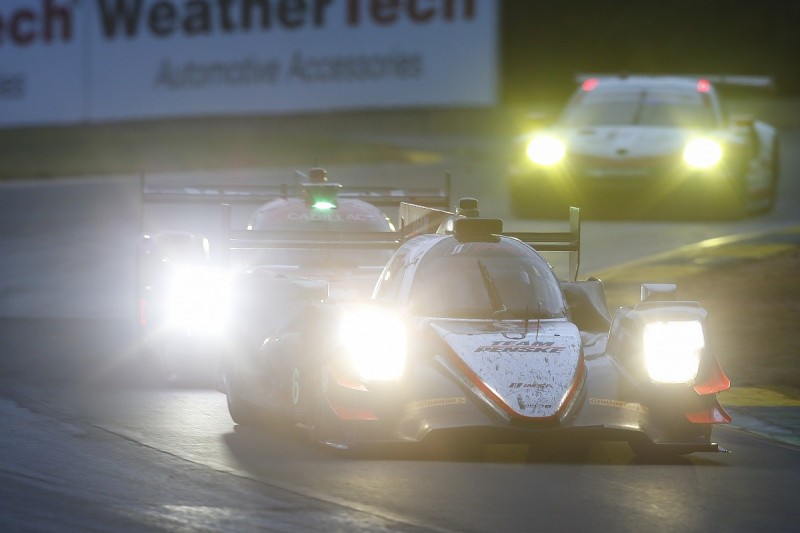 Penske's recovery was interrupted by a clash with Jack Hawksworth's GTD Lexus with around 90 minutes to go, but Juan Pablo Montoya charged hard to steal a podium finish amid the late drama.

The championship-winning Taylor brothers' first retirement of the season was one of several in this race, as Action Express also lost a Cadillac from the lead battle before mid-distance.

Action Express's #31 car dropped down the order when Mike Conway picked up a large piece of debris, while the Visit Florida Racing Riley pitted and quit in the closing stages when Renger van der Zande noticed its engine was about to expire.

Among the other non-finishers was Rebellion, after Nick Heidfeld had a big shunt with the leading Prototype Challenge car of Kyle Masson and Performance Tech Motorsports exiting Turn 1. 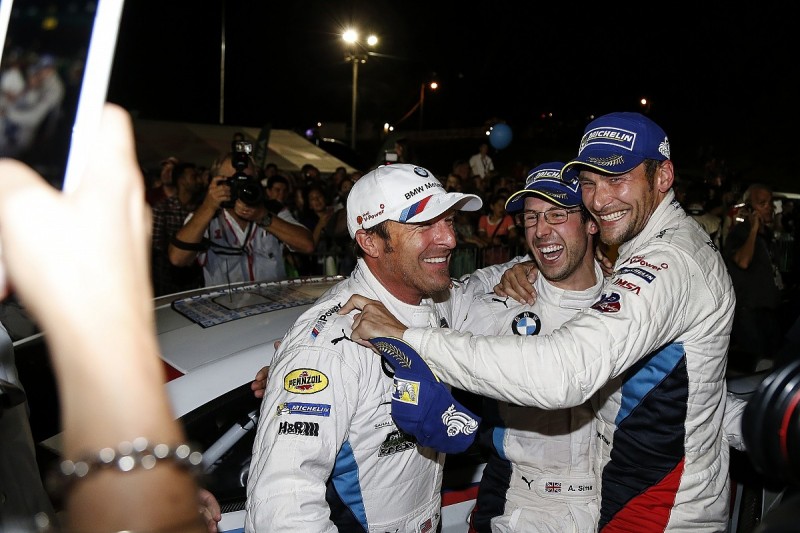 In the GT Le Mans category there was a thrilling battle to the flag between Alexander Sims' BMW and Antonio Garcia's #3 Corvette, in which Sims took the honours on the M6 GTLM's farewell appearance.

Sims, driving with Bill Auberlen and Kuno Wittmer, defeated Garcia in the 28-minute sprint after the final caution.

Garcia and Jan Magnussen - helped by Mike Rockenfeller on the day at Road Atlanta - took the season's drivers' title and Corvette won the teams' crown.

Toni Vilander finished 16 seconds behind in third to make it three manufacturers in the top three positions.

Tommy Milner was fourth in the #4 Corvette, which had an eventful race featuring an early spin thanks to a punt from Richard Westbrook's #67 Ford and a late off-track moment, just ahead of the two works Porsche 911 RSRs.

The #67 Ford was not part of the fight following Briscoe's clash with Derani, while Risi Competizione dropped out of the running after Giancarlo Fisichella got a pitlane speeding penalty.

They finished 15 seconds ahead of the Alegra Porsche of Daniel Morad, Michael Christensen and Michael Quesada, while Jorg Bergmeister, Patrick Lindsey and Matt McMurry made it two Porsches in the top three.