Magnussen, who made the switch to IMSA with the Chip Ganassi Cadillac squad after losing his F1 drive at Haas at the end of last year, and his team-mate Renger van der Zande controlled the one-hour-40-minute race on Belle Isle for their first win as a duo in the #01 DPi-V.R.

The pair beat the Action Express Cadillac of Pipo Derani and Felipe Nasr by a little over half a second, with van der Zande and Nasr spending most of their stints nose-to-tail with each other.

It marks Magnussen's first victory in any category since the Barcelona season finale in the now-defunct World Series by Renault series back in 2013 - coming just hours after fellow F1 convert Marcus Ericsson ended a similarly long win drought in the preceding IndyCar race.

“I haven’t won a race since 2013 and it feels great,” Magnussen said. “The whole season we have been fast, but just not getting it to the end. We led a lot of laps this year and finally the right laps.

"Chip Ganassi Racing had an impressive weekend [with Ericsson's win]. I was happy to contribute to that with a win as well.

“Coming here and knowing I was going to be able to fight for wins was a real privilege. To go racing with this awesome car at these awesome tracks with this team is a dream. I feel very fortunate and blessed to be able to do that.

"To come out of this weekend with the big trophy it’s pretty special. I am back in a winning situation and really enjoying it.” 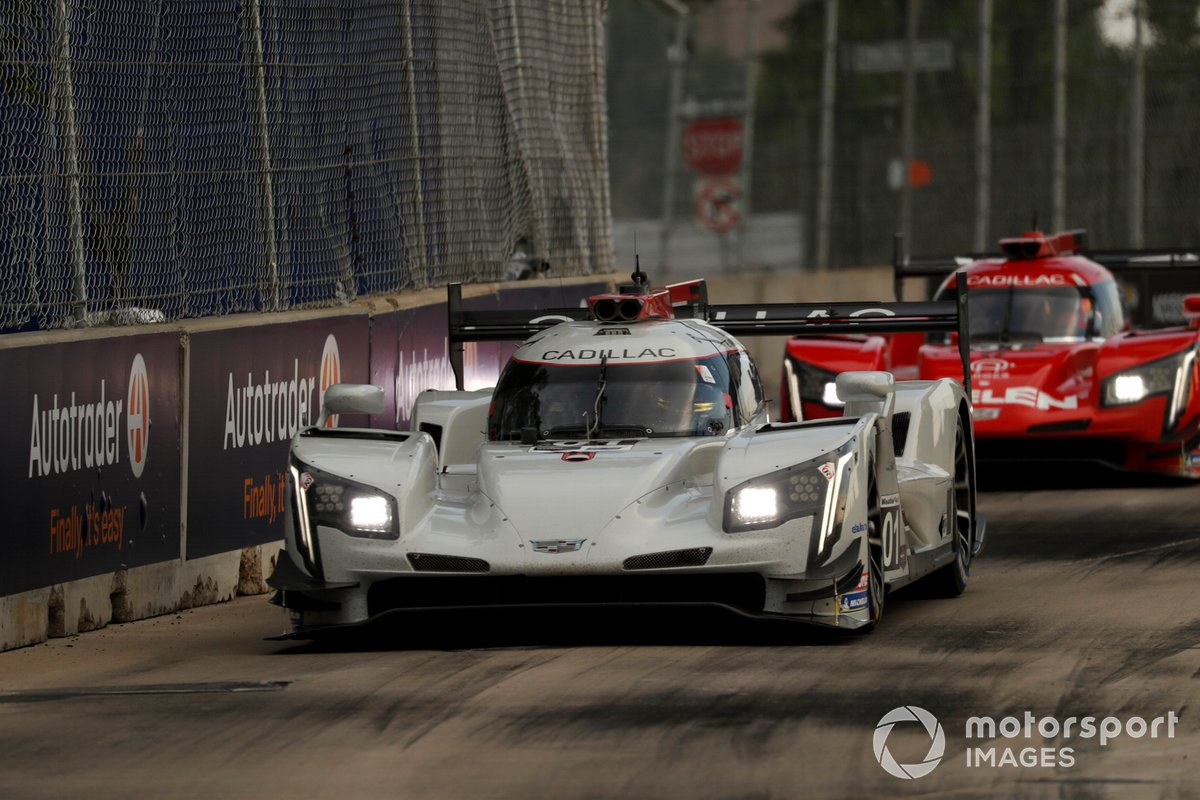 Ganassi made its return to top-flight prototype racing in 2021 and had come close to winning both the Rolex 24 at Daytona and Sebring 12 Hours earlier in the year, only for various issues to stand in the way of the team on both of those occasions.

But this time there was no stopping Magnussen and van der Zande, who led all bar two laps from pole in Detroit.

“We controlled the race," reflected van der Zande. "Kevin did a mega job in qualifying to get us to the front. We just kept control of it.

"You have to be lucky at street tracks not having crazy yellows at the wrong time. I think IMSA did a good job giving everyone a chance controlling the yellows. The car was really nice.

"We had the Cadillac set-up really well. The team gives you a lot of confidence so I can do what I do and that’s drive cars fast. The win on the home soil of GM, very proud.”

Nasr conceded that the Ganassi car appeared stronger during both of the race's restarts following full-course caution periods, the second of which came in the final 10 minutes.

"Although I hate to come in second as a driver, I’m happy for Cadillac because we got a 1-2 here in Detroit. But hey, it was good for the points – looking ahead to the championship.

"We got back-to-back podium finishes coming off the race at Mid-Ohio. It’s pretty satisfying, but at the same time we still have to work.”

Nasr and Derani now sit third in the DPi drivers' standings, behind the Wayne Taylor Racing Acura of Filipe Albuquerque and Ricky Taylor that finished third in Detroit and the solo Mazda entry of Harry Tincknell and Oliver Jarvis.

Magnussen and van der Zande are one place behind the AXR pairing in fourth.