The Briton, who only contested one full season of the World Endurance Championship in LMP1, revealed to Autosport that he favoured racing in a series in which he competed full-time in 2014-16 rather than moving over to Porsche's GTE Pro WEC squad.

"When I knew the P1 programme was finishing, I immediately spoke to Dr Frank-Steffen Walliser [Porsche's GT racing boss] to ask if there might be an opportunity to race in North America," said Tandy, who will return as expected to the Core-run GT Le Mans class factory Porsche squad in 2018.

"Having sampled GT racing across the globe, I know that the most fun racing is in IMSA.

"The great events, the level of competition between the factory cars and the spirit of North American sportscar racing make it the best racing out there."

Tandy explained that the decision for him and fellow P1 refugee Earl Bamber to race for Core at the Petit Le Mans enduro at Road Atlanta in October, prior to the end of the WEC season, was an obvious precursor to their full-time IMSA programmes with the new-for-2017 rear-engined 911 RSR.

"The Daytona 24 Hours [the opening IMSA round next month] comes early, so testing with the new car was always going to be limited," he said.

"I only did a couple of tests with the car early in 2016, and it is a very different racing car now." 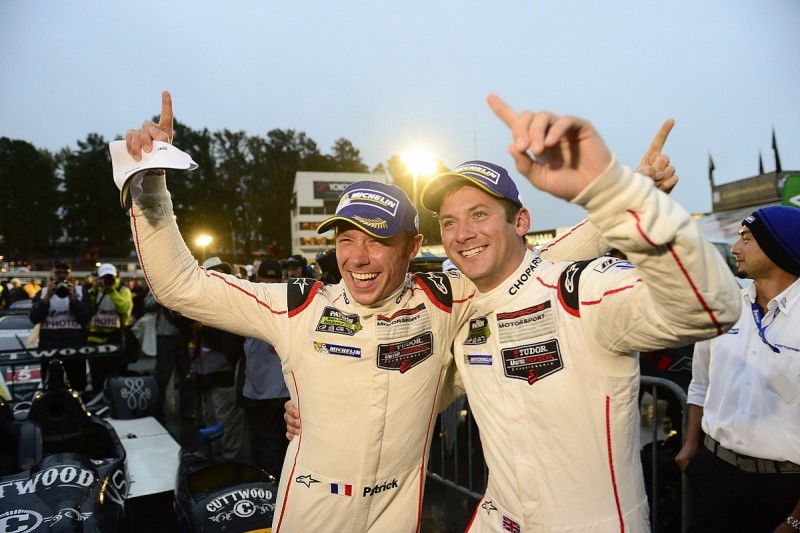 Tandy, who won Le Mans outright in 2015 in Porsche's third 919 Hybrid, said that it made sense for him to be teamed again with Frenchman Patrick Pilet, his IMSA partner in 2015 (above) and '16.

"It's such an easy fit because we are good friends, so there is no work needed," he added.

Tandy will still race at Le Mans next year because Porsche is expanding its attack on the GTE Pro class at the blue riband round of the WEC from two to four cars.

He will share a CORE-run car with Pilet and Bamber.

Tandy's return to IMSA is part of a reshuffle of Porsche's driver line-ups across its GT programmes in IMSA and the WEC for 2018.

Bamber, who contested a full programme in North America in 2015-16, will be paired with Laurens Vanthoor.

Two-time WEC class champion Gianmaria Bruni, who contested the second half of the 2017 IMSA series after leaving Ferrari, will join the WEC programme alongside Richard Lietz.

Dirk Werner and Frederic Makowiecki, who raced in IMSA and WEC respectively this year, will move across to the Blancpain GT Series Endurance Cup.

They will share a Manthey-run Porsche 911 GT3-R together with two-time Le Mans winner Romain Dumas, as well as contesting all four races that make up the Intercontinental GT Challenge.

Fernando Alonso preparing for first test at Daytona this week