Brown had started the HPD and remained in touch with the leaders before pitting early from fourth, when van Overbeek took over.

After the second set of pitstops he hunted down Jordan Taylor's Wayne Taylor Racing Corvette Daytona Prototype, getting within sixth tenths of a second with 20 minutes to go.

Taylor ran wide under pressure from van Overbeek and the HPD driver took the lead, driving to a 5.833s cushion by the finish.

Scott Pruett took a distant third for Chip Ganassi Racing after a late pitstop for fuel, followed by the Corvette DPs of Joao Barbosa and Richard Westbrook.

Gustavo Yacaman battled for the lead early on in the OAK Racing Morgan-Nissan, but a clash in traffic for team-mate Alex Brundle at the Corkscrew forced the car into the pits, leaving it 14 laps down.

CORVETTE ON TOP IN GTLM

Magnussen cruised to a huge advantage by the first stop on lap 42 where Garcia took over the car, and as the pitstops cycled through the Corvette regained a lead it would not relinquish.

Bill Auberlen provided the fireworks on the last lap as the two-stopping BMW reeled in a host of cars on its fresher tyres in the final 10 minutes.

Auberlen attacked Nick Tandy's Porsche 911 RSR into the last corner, barging his way through on the inside to take second in class.

Tandy took third, followed by Risi's Giancarlo Fisichella, who had earlier led the class thanks to an inspired decision by Fisichella's team-mate Pierre Kaffer, who elected to start the race on new tyres from the back of the grid. 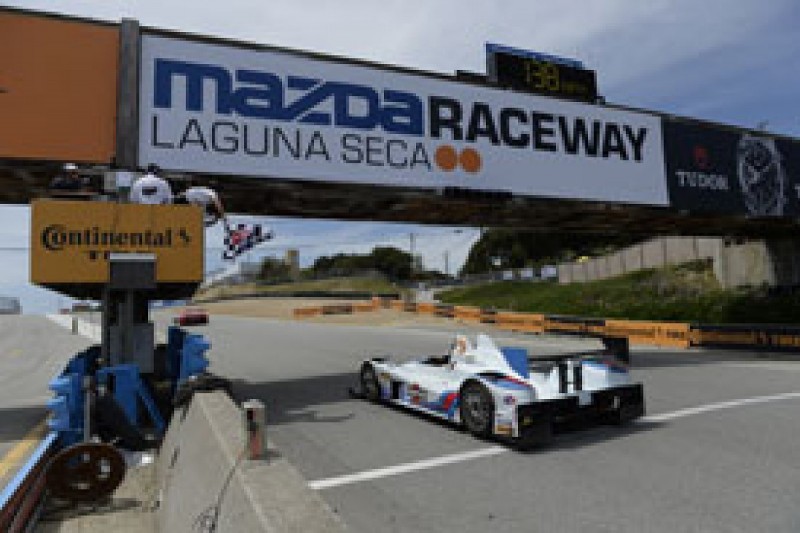 Renger van der Zande won Prototype Challenge for Starworks in the earlier race one, which featured the PC and GT Daytona classes.

Rayhall had a spin at Turn 10 with 11 minutes remaining, putting paid to his chances of challenging for the win. Early leader Bruno Junqueira was third.

Dane Cameron in the Turner Motorsport BMW caught and passed the spluttering Pumpelly, but still had to hold off the charging Christopher Haase in the Paul Miller Racing Audi on the last lap, which he managed by just 0.168s.

Dave Price replaced as DeltaWing team boss in the USC