The Acura Team Penske crew were running second to pole-sitting team-mates Dane Cameron and Juan Pablo Montoya on the penultimate lap when Cameron moved over to allow Taylor through into a fourth win of the year by 0.487s.

Pole-starter Montoya led away at the start from Castroneves and the Mazdas of Oliver Jarvis and Jonathan Bomarito as Pipo Derani's Action Express Racing Cadillac dropped from fourth to sixth behind the similar JDC-Miller Motorsports car of Tristan Vautier.

Derani and championship leader Ryan Briscoe's Wayne Taylor Racing Cadillac both passed Vautier on lap 8 after the Frenchman was caught off-guard at the final corner, while Derani continued his recovery by passing Bomarito on lap 15, Briscoe following shortly afterwards.

Castroneves had fallen 6s behind Montoya by the time of his pitstop on lap 26, losing a left-front dive plane while lapping a Corvette. That meant Taylor came under pressure from Jarvis and Derani, the Brazilian taking full advantage of a loss of momentum for Jarvis to take third at Turn 2.

Briscoe was the last to stop, relaying to Renger van der Zande on lap 30, which cycled Cameron back into a comfortable lead.

The top three held station following the second round of stops, in which Derani handed over to Felipe Nasr, the ex-Formula 1 driver blotting his copybook by understeering into the sand as he exited the pits - albeit without losing a position. 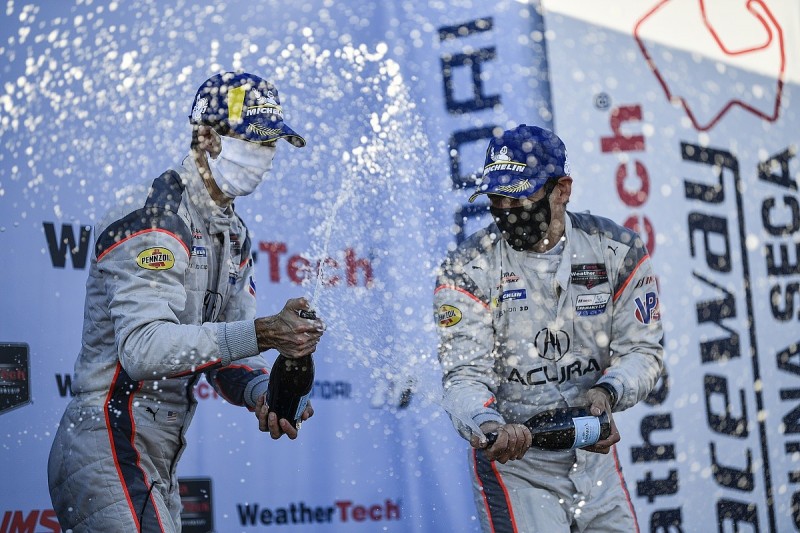 Following the last round of stops, Taylor began to close in on Cameron as the leader's pace slowed, but it took a caution when one of the leader's broken diveplanes found its way onto the racing surface to close them up completely.

Reigning champion Cameron then made the ultimate sacrifice for his team-mates in giving up a certain win, boosting Taylor and Castroneves into a two-point lead over the sixth-placed Briscoe and Van der Zande with only the Sebring 12 Hours remaining.

Derani's and Nasr's third place means Derani - Nasr cannot win the title after missing a round due to a positive COVID test - is 10 points in arrears.

In GT Le Mans, second position was enough for Corvette Racing pair Jordan Taylor and Antonio Garcia to claim the class title in the first season for the new Corvette C8.R as Laurens Vanthoor and Earl Bamber claimed their first win of the season for Porsche.

After following the Corvette away from pole, Vanthoor successfully undercut Taylor at the first pitstops as the second Porsche of Fred Makowiecki ran long in the first stint to move into third, ahead of Oliver Gavin's Corvette.

The positions remained unchanged between the lead pair after the second stops when Bamber and Garcia took over, while Makowiecki stretched his stint in an effort to make a two-stop strategy work before handing over to Nick Tandy.

The brief caution period following the leaders' third stops helped alleviate Tandy's fuel worries, but a couple of laps after the restart he was passed by Gavin's team-mate Tommy Milner for the final podium position. 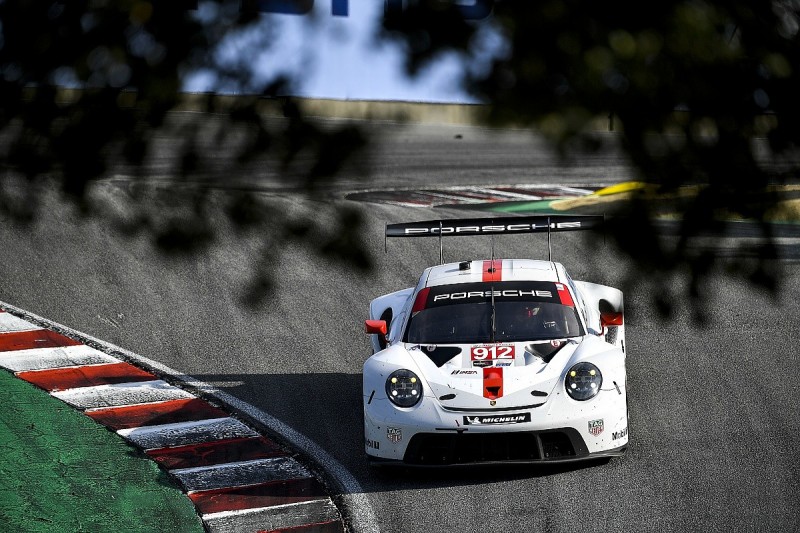 Garcia kept Bamber under pressure all the way to the end, finishing less than a second behind the #912 Porsche, but had to settle for second.

When Gavin and Milner were demoted to sixth for a technical breach discovered in post-race inspection, it gave their team-mates an insurmountable buffer with one round remaining.

Meanwhile in GT Daytona, the Meyer Shank Racing Acura NSX of Matt McMurry and Mario Farnbacher led all the way from pole to regain the points lead over the Wright Motorsports Porsche of Ryan Hardwick and Pat Long.

Poleman McMurry handed over to Farnbacher at the first stops and the German set about building a lead over Bill Auberlen's Turner Motorsport BMW, while Long was fighting back from sixth behind Alvaro Parente (MSR), Alessandro Balzan (Scuderia Corsa Ferrari) and Roman de Angelis (Heart of Racing Aston).

Long gained a place at the second round of stops, but lost ground tangling with Balzan at Turn 2 following the late race restart, allowing de Angelis into fourth ahead of Andy Lally's Magnus Racing Lamborghini.