Helio Castroneves and Ricky Taylor battled through a heavy downpour to win the IMSA SportsCar Championship race at Road America, as multiple accidents in the elements triggered a race stoppage

Taylor, sharing the #7 Penske Acura with Castroneves, burst away from pole at the start while Harry Tincknell's Mazda RT24-P got the jump on the second Acura of Dane Cameron.

But Tincknell soon had to concede the spot when Cameron repassed him around the outside of Turn 5.

Having been under fire from the Mazdas in the opening stages, Castroneves took over the #7 Acura as Tincknell stayed aboard Mazda #55.

By lap 42, Castroneves, Tincknell and the second Mazda of Oliver Jarvis were covered by one second and had pulled a 14s margin over the Wayne Taylor Racing Cadillac of Renger van der Zande, who was busy defending working from Pipo Derani's Action Express Racing Caddy.

Castroneves and Jarvis pitted from first and third respectively on lap 50, while Tincknell stayed out for one more lap before handing over to Jonathan Bomarito - who fell to third after a long stop.

However, Mazda's prospects took an upturn within a couple of minutes, as Jarvis got a strong run through Canada Corner and passed Castroneves to take the effective lead.

But van der Zande managed to get to the pits for his scheduled stop and was able to neatly switch to wets at just the right time as the rain began to fall.

Jarvis stayed out on slicks rather than pit and, when the caution flew for a GTLM car in the sandtrap, that trapped him outside the pits as pitlane closed.

While Jarvis assumed the lead, he had wet-shod van der Zande behind him, and was being pursued by Castroneves and Bomarito before the red flag was thrown with 30 minutes to go. 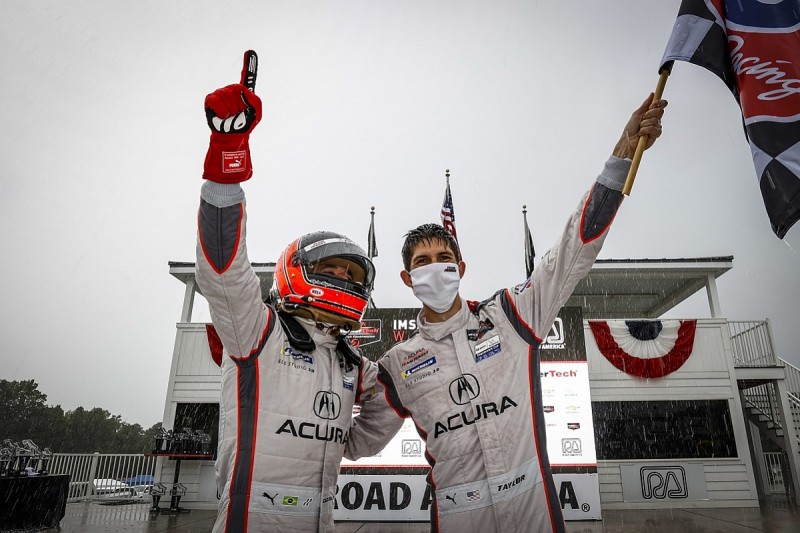 When the cars got rolling again with little more than 20 minutes to go, albeit under yellow, Jarvis initially stayed out on slicks but peeled into the pitlane on the restart with less than seven minutes to go, leaving van der Zande out front ahead of Castroneves, Derani and Bomarito.

However, van der Zande ran wide at the final corner allowing Castroneves into the lead, and leaving himself vulnerable to Derani behind.

But when the full course yellows flew for a GTLM shunt involving John Edwards and Nick Tandy on the final lap, Castroneves passed the checkered flag 0.383sec ahead of van der Zande, Derani third followed by Sebastien Bourdais in the JDC Miller Motorsports Cadillac and the two Mazdas of Bomarito and Tristan Nunez.

In LMP2, Simon Trummer and Patrick Kelly dominated for much of the race in the PR1/Mathiasen Motorsports car, but the rainfall caused Trummer to go off after making contact with Cameron's Acura team-mate Juan Pablo Montoya, leaving class victory to the DragonSpeed entry of Ben Hanley and Henrik Hedman.

The #3 Corvette of Jordan Taylor and Antonio Garcia took a second GTLM class win in three races, having taken the lead from Porsche's Laurens Vanthoor at the start. 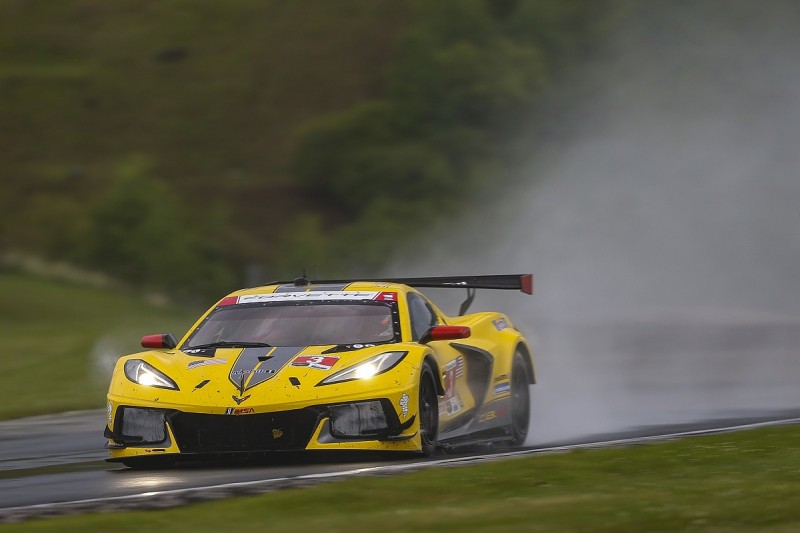 Multiple positional changes in the rain put Edwards' #24 BMW M8 in the lead of the class with Garcia in second, but on the final lap Edwards and third-placed Tandy both went off at The Kink, leaving Garcia and Milner to take a remarkable 1-2 for Corvette.

Edwards was classified third ahead of the Porsches of Tandy - who never actually saw the checkered flag - and Vanthoor's team-mate Earl Bamber.

Frankie Montecalvo and Townsend Bell took victory in the GT Daytona category, as the AIM Vasser Sullivan Lexus RC Fs maintained their recent dominance from the start - barring a brief spell towards the end when Mario Farnbacher, in his Meyer Shank-run Acura NSX, briefly led.

Following the restart, Farnbacher slashed his way forward and passed Bell for the class lead by going around the outside of the Lexus at Canada corner.

However, after that brilliant manouevre, Farnbacher spun at Turn 11, handing back the lead to Bell who was thus P1 when the full course yellow flew again on the final lap.

Farnbacher held onto second, while Lexus' Jack Hawksworth held on for third having been unable to convert from Aaron Telitz's class pole.