The duel for pole was as close as the final results indicated, with Nasr setting the top time in Sector 2, while Tincknell fought back in Sector 3, but it was the Whelen Engineering Cadillac that Nasr will share with Pipo Derani and Mike Conway that ultimately prevailed.

Third went to the JDC Miller Motorsports car driven by Sebastien Bourdais, impressively only another 0.15s behind this pair and ahead of Kevin Magnussen in the #1 Chip Ganassi entry.

Dane Cameron set a 68.920s lap before pitting the #60 Meyer Shank Racing Acura early, while Kamui Kobayashi was forced to do the same in the second Action Express Cadillac after a huge trip through the Turn 2 grass. The #10 Wayne Taylor Racing Cadillac will start last in class.

Ben Keating survived a spin at Turn 3 to lead the LMP2 contenders in the PR1 Mathiasen Motorsports to take pole in the class, 0.35s ahead of Steven Thomas in the WIN Autosport car, with Dwight Merriman a further half-second adrift.

LMP3’s session commenced with two near-immediate spins, Josh Skelton going around in the #83 WIN Autosport car at Turn 3 and then limping back to the pits with an askew left-rear wheel, and then Max Hanratty spinning on pit exit in the FastMD Racing car. However, the latter was able to rejoin the fray.

At the sharp end of the field, it quickly became clear it was a two-horse race, with Niklas Kruetten of United Autosports battling against Rasmus Lindh of Performance Tech Motorsports. In the end it was Kruetten who won the battle, by only 0.086s, Lindh’s cause not helped by an aerobatic off at Turn 2 during one of his quick laps.

Jarett Andretti was 1.46s off the ultimate pace in third in the Andretti Autosport entry, but a quarter of a second ahead of the Riley Motorsports cars of Jim Cox and Gar Robinson. 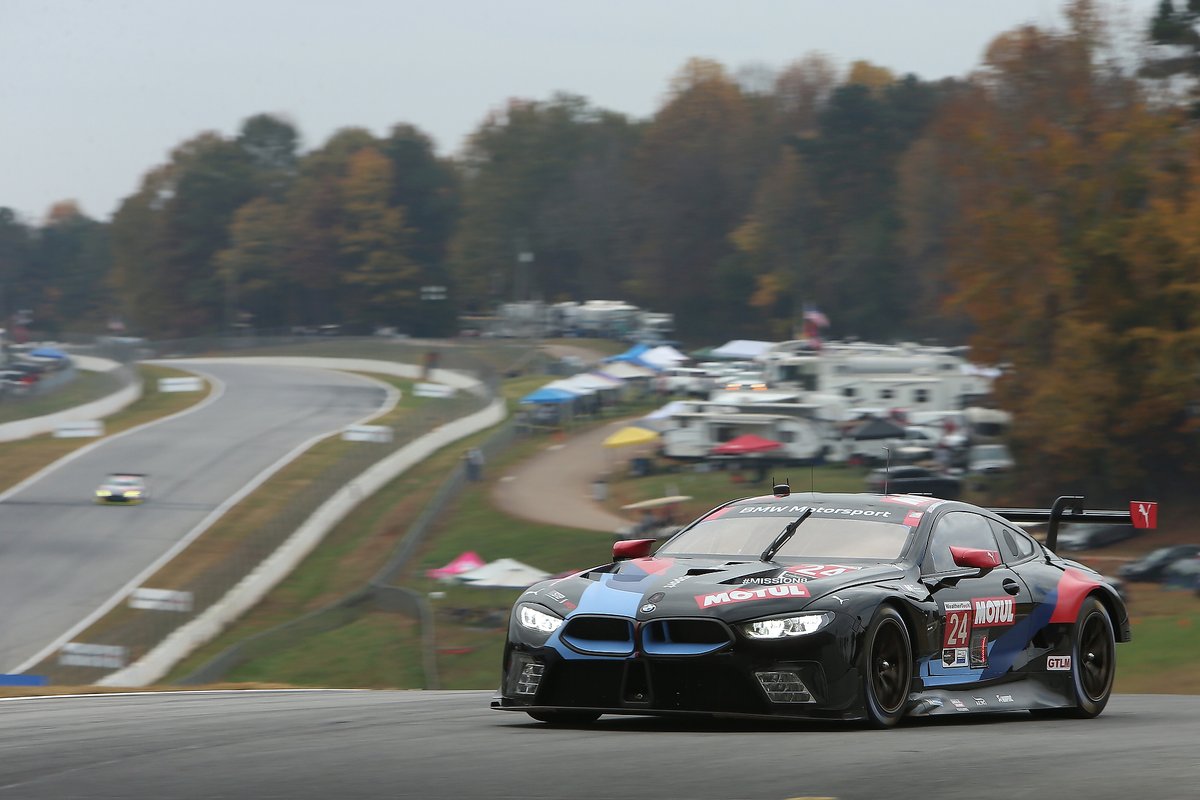 In the GT Le Mans class, it was a session of stark contrasts for the Rahal Letterman Lanigan-run BMW M8s on their IMSA swansong, with Jesse Krohn setting an impressive 1m15.226s – half a second clear of his nearest opponent to take class pole – and team-mate Connor De Phillippi going off, collecting an advertising hoarding and air-dam full of turf, forcing him to park up.

Matt Campbell in the #79 WeatherTech Racing Proton Competition Porsche 911 RSR was second fastest, beating Frederic Makowiecki in the one-off stablemate WTR 911, and the quarter of a second gap between them was big enough for them to be split by a last-second effort from Antonio Garcia in the #3 Corvette C8.R.

In GT Daytona, the Silver/Bronze session that sets the grid positions for the class saw a gripping battle between Porsche, Lexus, BMW, Lamborghini and Audi. In the end it was Paul Miller Racing Lamborghini Huracan of Madison Snow which emerged on top, just 0.001s ahead of Benja Hites in the NTE Sport Audi R8.

The Chilean driver in turn was only 0.022s ahead of Robby Foley in the Turner Motorsports BMW M6 in its final race, with Aaron Telitz a further 0.013s down in the top Lexus RC F of Vasser Sullivan.

Wright Motorsports did a great job to rebuild the #16 Porsche 911 GT3 R damaged in a clash with an LMP2 car yesterday, so Trent Hindman was able to prevail in the Porsche battle, a few hundredths ahead of Pfaff Motorsports’ Zacharie Robichon.

Once the pros took over, Jack Hawksworth pushed the #14 Lexus RC F into top spot in class ahead of Bryan Sellers in the PMR Lambo, with Bill Auberlen third in the Turner M6 and Zach Veach fourth in the second Lexus.