The Penske Acura squad stole the initiative from the Action Express Cadillacs to lead as the Daytona 24 Hours approached the halfway mark, but Fernando Alonso's race has been ruined

Simon Pagenaud led the race by four seconds in the #5 Acura ARX-05 he is sharing with Juan Pablo Montoya and Dane Cameron after moving up from fourth.

The Frenchman and team-mate Graham Rahal jumped the two Cadillacs in the pits during the 12th hour and then took to the front of the field when the sister car spun at Turn 1.

Pagenaud trailed Rahal by 14 seconds after the stops, but had progressively brought down the gap before passing his stationary team-mate.

That meant he led from the Mustang Sampling Action Express Cadillac DPi-V.R driven by Christian Fittipaldi at half distance.

The Penske drivers had stayed in their cars during the pitstops and didn't take tyres, whereas the Action Express cars swapped drivers and rubber.

The Mustang Sampling Caddy led into the pits with Joao Barbosa at the wheel, Fittipaldi emerging in third.

Felipe Nasr returned the Whelen Engineering Caddy in second before the stops and fourth afterwards with Mike Conway swapping over.

Only the Penske and Action Express entries were on the lead lap at half-distance.

The pole-winning Wayne Taylor Racing Caddy dropped out of contention in the ninth hour when the car sustained a third right rear tyre blow out of the race.

Radiator and sidepod damage necessitated a trip back to the garage for repairs. 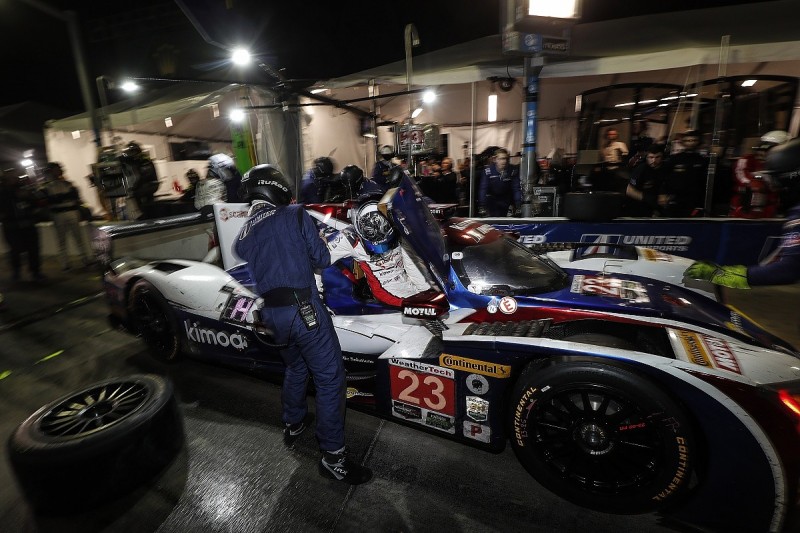 The Spaniard, who is sharing the car with Lando Norris and Phil Hanson, was running in eighth place when he complained of the braking issues.

He went straight on at Turn 1 and missed out the infield section of the Daytona International Speedway, before coming into the pits and heading straight into the garage area for repairs.

A brake master cylinder was replaced, which dropped the car outside the top 20.

Ford continued to dominate GT Le Mans, the #66 Ganassi entry leading the way with Dirk Muller at the wheel from the sister car driven by Ryan Briscoe.

Both Ford GTs led by over a lap from the Chevrolet Corvette C7.Rs, which had both been given new brakes.

The #3 Chevy was one lap down in the hands of Mike Rockenfeller after undergoing its brake change during a safety-car period, the #4 entry two laps in arrears are taking brakes under green-flag running.

The Land Motorsport Audi R8 LMS, which had led the class for much of the first third of the race, dropped down the order after being given a five-minute stop-go penalty for a Balance of Performance infringement.