The Iron Lynx Ferrari outfit maintained its lead in the Spa 24 Hours as the race hit the 18-hour mark, albeit with a reduced advantage over the best of the Team WRT Audis.

Having secured maximum bonus points for the GT World Challenge Europe Endurance Cup by virtue of leading after both six hours and 12 hours, the #51 Ferrari 488 GT3 driven by Alessandro Pier Guidi, Come Ledogar and Nicklas Nielsen continued to head the field with six hours to run.

Both the Iron Lynx car and the #32 WRT Audi shared by Dries Vanthoor, Charles Weerts and Kelvin van der Linde were able to complete the mandatory four-minute 'technical pitstop' during a full-course yellow period in the 16th hour, following an off for the #16 Grasser Lamborghini Huracan GT3.

The race then stayed green, with Nielsen and then Pier Guidi extending their lead to around 22 seconds before another FCY was called in the middle of the 18th hour following a heavy crash for the #23 Huber Motorsport Porsche 911 GT3 R of Niki Leutwiler at the top of Radillion.

Pier Guidi and Vanthoor both came in for their scheduled stops during the caution period, gaining an advantage over the third-placed Garage 59 Aston Martin Vantage GT3 that made its previous stop under green.

Pier Guidi was able to make an additional trip to the pits to top up for fuel without losing the lead, as the WRT crew made a longer stop as Vanthoor handed over to Weerts. As the race was about to return to green on the 18-hour mark, Pier Guidi held a lead of 4.4 seconds.

Marco Sorensen remains on the lead lap in the Aston he shares with Ross Gunn and Nicki Thiim, some 2m30s off the lead.

A lap down in fourth place is the FFF Racing Lamborghini that has Marco Mapelli at the wheel, which benefitted from completing its most recent stop partly under FCY conditions. 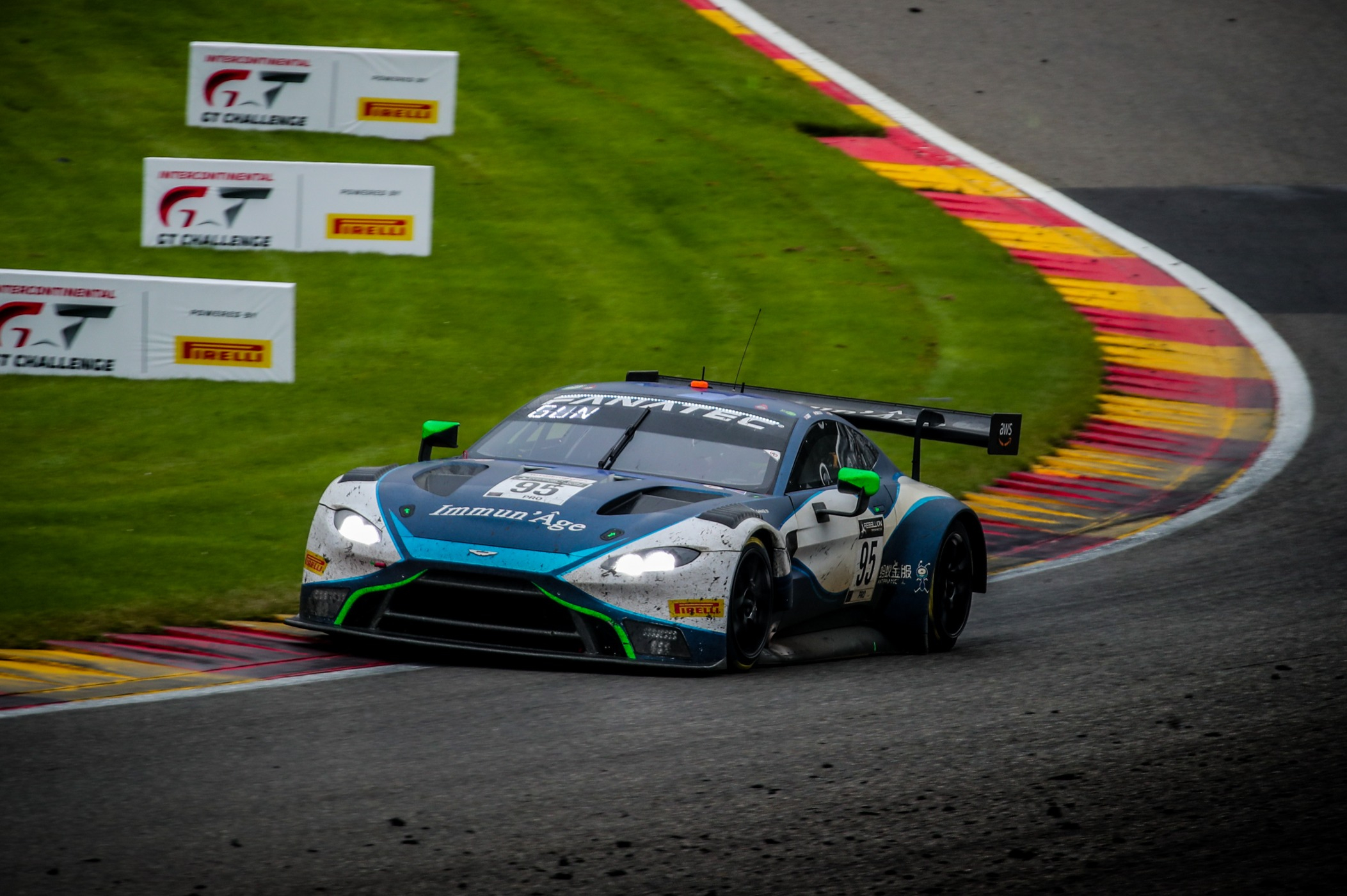 Sorensen, Thiim and Gunn are back on the lead lap in Pro class Garage 59 Aston

That allowed the Lambo to clear the KCMG Porsche that it had been battling on-track, as Maxime Martin and Nick Tandy - now without team-mate Laurens Vanthoor following a paddock accident for the Belgian - lost time by bringing in the best of the 911 GT3 Rs under green.

The #66 Attempto Audi, currently with Christopher Mies at the wheel, likewise was able to jump the KCMG Porsche by pitting under the FCY.

Audi still had four cars in the top 10, with the #37 WRT car seventh and the #25 Sainteloc machine in ninth, split by the Jota McLaren 720S GT3 in eighth place. The second KCMG Porsche, the #18 car, completed the top 10.

The best of the Mercedes-AMG GT3s was the #89 ASP car in 11th place, following the retirement of the sister pole-sitting #88 car that had been running third until a damper problem ended its run.

Madpanda Motorsport remained in the lead of the Silver Cup class in 12th overall with its Mercedes, while the #53 AF Corse Ferrari held the advantage in the Pro-Am classification.