The makeshift AF Corse crew, with Pier Guidi's regular co-drivers James Calado and Nicklas Nielsen on duty in yesterday's World Endurance Championship finale in Bahrain, started second on the grid for the six-hour race but only showed its hand in the final 90 minutes.

A daring strategic call at the final round of pit-stops helped them leapfrog long-time leaders, the GPX Racing Porsche crew of Mathieu Jaminet, Matt Campbell and Patrick Pilet.

That gave Pier Guidi the Endurance Cup title at the expense of Boguslavskiy, who endured a difficult race to a pointless 18th after suffering a broken splitter in the third hour in the Mercedes he shared with Raffaele Marciello and Maxi Buhk.

However, with the WRT Audi of Dries Vanthoor, Charles Weerts and Christopher Mies only finishing fourth, they could not overhaul their 24 point deficit to Boguslavskiy in the overall standings.

Behind, chaos ensued as FFF Racing's Marco Mapelli tagged the back of Mies at the first corner, sending the latter into a 360-degree spin and dropping him to 18th.

Mies' comeback drive back through the field before the end of the third hour was sensational, with the German "driving angry" before carving his way back up to second following the second round of pit-stops.

His recovery was in stark contrast to Mattia Drudi's Attempto Racing Audi, which received a drive-through penalty due to a jump-start from team-mate Kim-Luis Schramm.

Until then, Schramm had been one of the stars of the race, along with early leader Altoe in the Lamborghini.

Both found a way past the pair of Ferraris, which appeared to struggle with tyre degradation inside the opening hour, but dropped behind Campbell's GPX Racing Porsche that maintained the lead at half-distance.

Heavy clouds had lurked over the Castellet circuit since the morning and the predicted rain shower duly arrived in the fourth hour. Pilet, having taken over from Campbell, kept the GPX Porsche firmly in control as the rain started to fall, gapping Mapelli to the tune of 15 seconds.

Inside the final two hours, it was the #51 AF Corse Ferrari which made it back into contention, Pier Guidi emerging from the fourth round of stops ahead of Mapelli's team-mate Dennis Lind.

The relative lack of full course yellow periods throughout the race - two in total - meant that strategy was largely consistent across the field with none of the crews electing to go off sequence.

Come the final stops, AF Corse played the strategic game by changing only the left-hand side tyres on Pier Guidi's car versus fresh rubber all-round for Jaminet, which was enough to hand the Ferrari the lead. 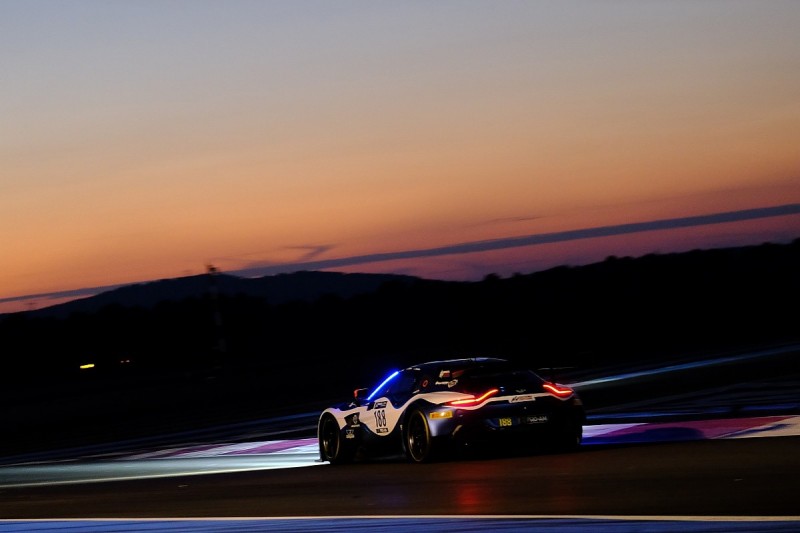 As night fell, Pier Guidi brought the Ferrari home to victory by 1.690s over Jaminet, while Andrea Caldarelli completed a strong race for the #63 FFF Racing Lambo to take third.

In Pro-Am, Garage 59's Alexander West and Chris Goodwin claimed the title as the pair, alongside Marvin Kirchhofer, took the class victory ahead of the Barwell Motorsport Lamborghini of Leo Machitski, Rob Collard and Sandy Mitchell.

There was joy in the other Barwell garage, as Frederik Schandorff, Alex MacDowall and Patrick Kujala picked up the Silver Cup Endurance title with victory from the overall champions Aurelien Panis, Timothe Buret and Thomas Neubauer.