Jenson Button says it will be "difficult" for he and Naoki Yamamoto to defend their SUPER GT title, despite returning to the podium in last weekend's Fuji 500-mile round

The Kunimitsu Honda duo charged from 10th on the grid to finish second in the bonus-points race, accumulating 18 points to move up to fifth in the drivers' standings.

But Button believes the points advantage the championship-leading LeMans Lexus team has built, through back-to-back victories in Thailand and Fuji, means their title defence is now more difficult.

LeMans pair Kazuya Oshima and Kenta Yamashita moved 16 points clear of their nearest rival after the longest race of the year, and Button and Yamamoto trail them by 31 points.

Button and Yamamoto's season has been hindered by scoring just 11 points in the first half of the year, while the championship-leading LeMans crew has won two of the first five races.

"When we can get points, we get [on the] podium," Button told Autosport.

"So we've been very unlucky with three races, accidents.

"Yeah, [winning] the championship is difficult because the #6 [LeMans] car has 60 points. But this is Super GT, with the success ballast anybody can still fight for the championship.

"We go to Autopolis thinking about winning the race, we don't think about the championship. We go and enjoy the race, and fight for the win."

Button and Yamamoto were running second behind the race-leading NISMO Nissan of Ronnie Quintarelli and Tsugio Matsuda when the second safety car had to be deployed for Jann Mardenborough's stranded Kondo Nissan.

Yamashita dived into the pits for the #6 Lexus's third stop right before the safety car intervention, and it elevated him and Oshima into the lead. 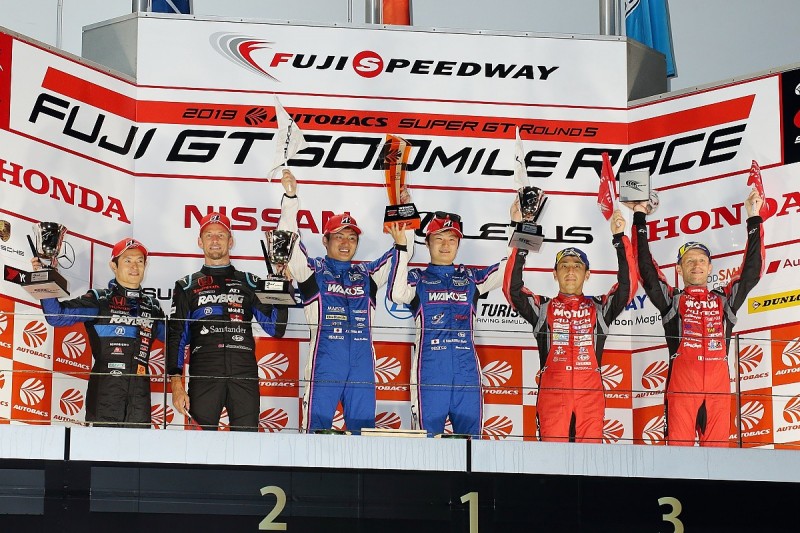 Button believes he could have scored his second GT500 victory if the LeMans Lexus team had not been "very lucky" with the safety car.

Button and Yamamoto were able to jump the NISMO car in the next pitstop and hold off subsequent attacks to finish second.

"We did the maximum for the car today," Button said. "Good drive by Naoki and myself. The team did a good strategy. We had a chance to win but the #6 car got very lucky with the safety car.

"It really was a shame. But we fought today very hard, with a lot of quick cars. We were able to beat the #23 NISMO [car], which was surprising. Very good job by the whole team.

"We are happy, but always a little bit disappointed when you know that you didn't have the opportunity to fight for a win. Maybe we wouldn't win, but the opportunity was gone because of the safety car."