Heavy rain resulted in the stoppage at approximately 5:40am local time after a lengthy full-course yellow virtual safety car period, with Christian Engelhart out front in the #63 Lamborghini Huracan GT3 Evo.

The race, the double-points round of the Blancpain GT Series, was originally halted for a period of one hour but a decision has now been made to extend the stoppage to at least 11:30am.

The team managers will meet in advance to discuss whether the conditions have suitably improved to allow the race to restart.

The Lamborghini that Engelhart shares with Mirko Bortolotti and Rolf Ineichen led by 7.4s at the time of the stoppage from the factory Walkenhorst BMW M6 GT3 driven by Nicky Catsburg, Mikkel Jensen and Christian Krognes.

The third-place Dinamic Porsche 911 GT3-R shared by Klaus Bachler, Andrea Rizzoli and Zaid Ashkanani was a further 13s behind.

The first three cars had not taken their mandatory five-minute technical pitstop that allows the cars to change brakes under controlled, non-competitive conditions. 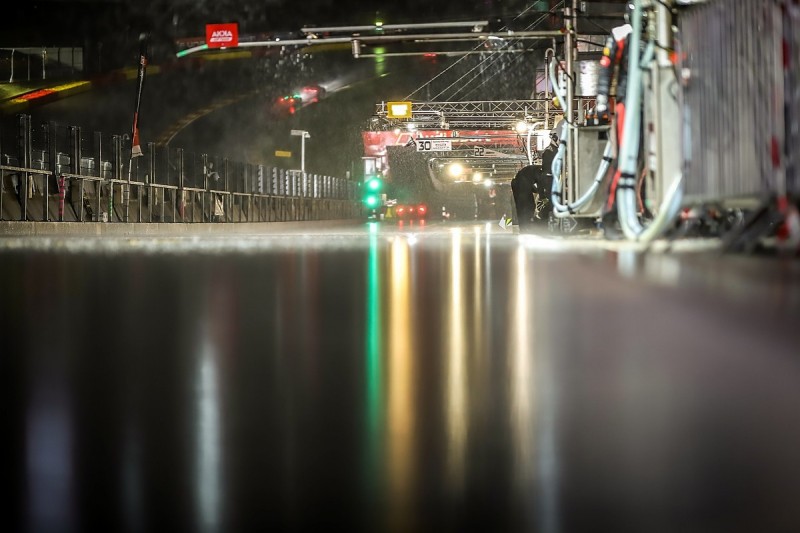 The SMP Racing Ferrari 488 GT3 of Mikhail Aleshin, Davide Rigon and Miguel Molina was running fourth when the red flags were shown.

The AF Corse-run car took its second maximum points haul of the race at the 12-hour mark.

It was leading the race when the second tranche of points were awarded, just as it was at six hours, and then made its mandatory stop.

The pole-winning factory Black Falcon Mercedes-AMG GT3 of Maro Engel, Yelmer Buurman and Luca Stolz was fifth having led the race by more than half a minute in the small hours of the morning.

That lead disappeared with two quick-fire periods of yellow-flag running — the fifth and sixth of the race — in the run-up to half-distance.

The remaining R-Motorsport Aston had been among the frontrunners as half distance approached before a short delay for the car driven by Alex Lynn, Jake Dennis and Marvin Kirchhofer dropped it off the lead lap.

The top M-Sport Bentley Continental GT3 was three laps down in 27th place in the hands of Steven Kane, Jules Gounon and Jordan Pepper.