The Brazilian was caught right in the middle of the 12-car opening lap pile-up, which was triggered when Daniel Juncadella ran into the barriers at Police and was collected by following cars.

Amid the spectacular chain reaction smash, with the circuit blocked and drivers having no time to react, di Grassi's Audi ended up being punched on top of Marco Wittmann's BMW right in the middle of the pile-up.

After jumping out of his car, and being given the all-clear by doctors, di Grassi said he had never experienced such crazy scenes before in racing.

"I don't remember in my career having 12 drivers discussing a shunt," di Grassi told Autosport. "It was a big one.

"But in that corner, on the first lap, with the cars this wide - it is very difficult for people to avoid."

Di Grassi said that the nature of the corner, allied to cars being in close proximity to each other on the first lap, meant there was no way of avoiding the accident. 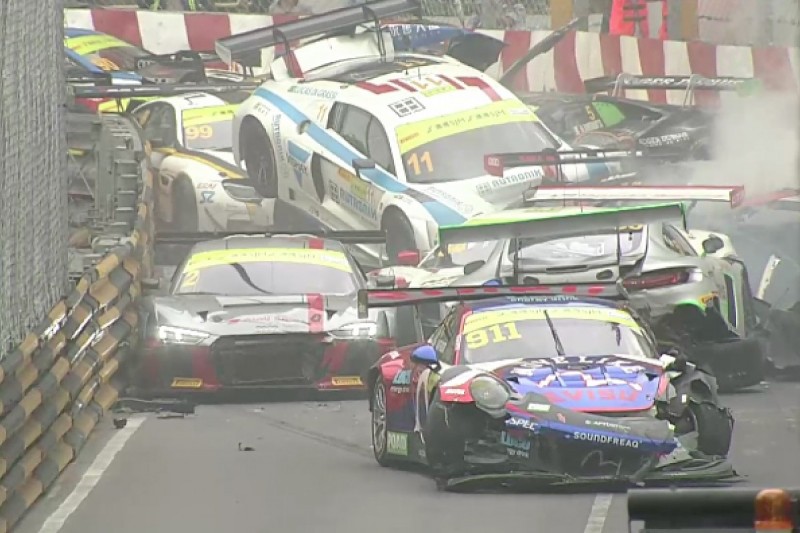 "I was totally blind," he explained.

"I came around the corner and was very close to Markus [Pommer], and then I hit him.

"Then [Marco] Wittmann hit me in the back and then it was like being compressed.

"Then my car was going up and up and up. There was nothing I could do.

"I ended up on top of Marco's roof. After I jumped out, I had to jump on his car and then onto the ground."

With so many drivers caught up in the accident, and only eight cars able to take the restart, di Grassi said that coming through the chaos was about luck rather than skill.

"That is Macau," he said. "It is the risk that comes from starting in the midfield, as you have more risk of a shunt.

"In this situation, even if you are careful you cannot avoid the accident.

"It is not a risk management. It is just a matter of luck."