© 2021 Motorsport Network. All rights reserved.
TV Tickets fashion Giorgio Piola jobs
Previous / Clio Cup to continue in UK after all as Renault Sport steps in Next / The rise and rise of motorsport education
General / News

Adam and Davidson finished sixth on the road after Adam was pushed wide at the Old Hairpin by Dennis Lind's WPI Motorsport Lamborghini with three minutes to go.

Barwell Motorsport pair Jonny Cocker and Sam De Haan inherited Adam's fourth place in the incident, and were provisionally champions by half a point.

The incident was investigated by the stewards after the race and a five-second penalty was handed to Lind, reinstating Adam's damaged Aston Martin to fifth, 2.5 points ahead of Cocker/De Haan.

"It's a weird celebration," said Adam, who has now won the British GT title four times with four different co-drivers.

"Obviously we would love to celebrate it on track with the team, so it was weird to get out of the car knowing we had to appeal this, but the decision was clear cut."

WPI Motorsport appealed the decision, but this was dismissed.

Facing a 20-second pitstop success penalty for their victory at Brands Hatch last time out, the odds were stacked against Adam and Davidson, who came into the meeting six points behind Phil Keen and Adam Balon's Barwell Motorsport Lamborghini, and 5.5 points ahead of Cocker/De Haan.

After a three-lap delay clearing away a GT4 accident on the formation lap, Balfe stormed into a dominant lead as Balon came under pressure from first Ian Loggie's Mercedes, and then Angus Fender's BMW.

Fender, who had passed Davidson at the Melbourne Hairpin, repeated the move on Balon, who then lost more places after making contact with Mike McCollum's KTM GT4 that damaged the steering and a rear tow-link.

Balon had dropped over a minute off the lead by the pitstops and their slim title hopes were then scuppered when a suspension component failed while Keen was negotiating the Craner Curves.

Davidson passed Loggie shortly before the pitstops to take third, and only lost one place after the stops, with Adam rejoining fourth, ahead of Cocker. 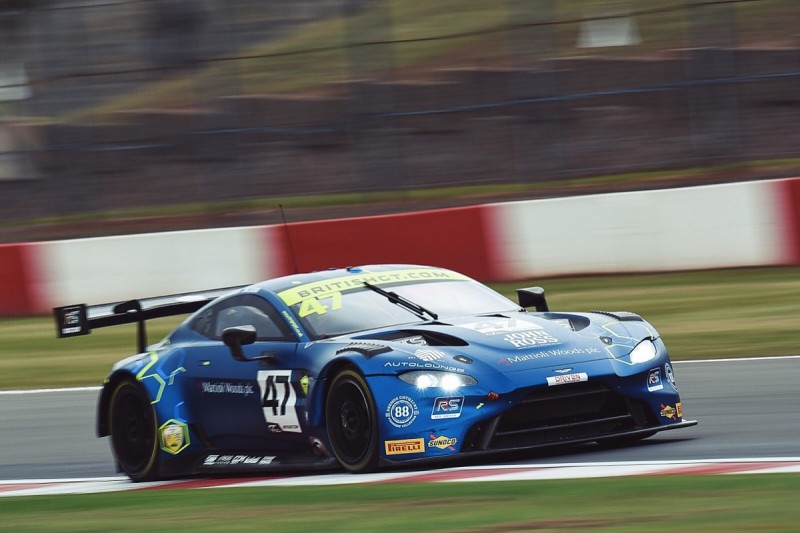 The appearance of the safety car with half an hour remaining for another GT4 accident then condensed the pack and allowed Lind to join the fray.

He passed Cocker, lost the place and regained it again, before punting Adam wide into the Old Hairpin.

Cocker didn't celebrate as he crossed the line, and over an hour after the race, the results were amended in favour of TF Sport.

Bell and Balfe gave the McLaren 720S its first victory in British GT, with Balfe building a lead of 27 seconds that negated his 15-second success penalty carried over from Brands Hatch prior to the stops.

Bell then took over and after the safety car shrunk his lead, held off the challenge of Callum MacLeod to win by 2.7s.

Their Aston Martin Vantage GT4 finished third on the road in a nail-biting conclusion, pipping the Multimatic Motorsport Ford Mustang of Seb Priaulx and Scott Maxwell by 7.5 points.

Priaulx passed Hand with 20 minutes to go, but narrowly failed in his bid to catch the race-leading Steller Performance Audi of Sennan Fielding and Richard Williams, which won by 1.5 seconds.

The Carlin driver came into the Donington meeting with a comfortable 52-point buffer over main championship rival Johnathan Hoggard, having taken two wins and a further six podiums throughout the season.

And despite Hoggard winning the opening race with Novalak in fourth, Novalak only needed to finish ahead of the Fortec driver in the full-reverse grid second race to claim the crown.

He did so, but not before they briefly collided and took to the grass through Starkey's Bridge on the opening lap of the race.

No further action was taken though, as Novalak finished 12th to secure the title with one race to spare.

The rise and rise of motorsport education