Gordon Spice, who has died at the age of 81 following a battle with cancer, was one of the finest tin-top drivers of his generation.

Spice was best known for winning the top class of the BTCC for six consecutive seasons from 1975-80, and earning four world sportscar championship titles in the Group C2 category in 1985-88.

A driver of the old school, he was an accomplished raconteur who was invariably the life and soul of any social gathering, often entertaining his audience with magic tricks. Away from the cockpit he was rarely seen without a cigarette in one hand and a drink in the other.

His innate sense of fun belied a deadly serious approach when it came to racing, and he was a fierce competitor too in the business world.

Spice’s east London-born father George had humble beginnings as a city messenger boy, before becoming wealthy in the cocoa business, enabling him to give Gordon and his siblings a good start in life.

At age 18 the younger Spice emigrated to Australia as “£10 pom” to take up a job in a finance company. He earned extra money in the evenings working as a barman in a Sydney hotel, where customers included Frank Sinatra, Sammy Davis Jr and Dean Martin.

Although he loved Australia and had quickly risen through the ranks in business, Spice was obliged to return to the UK in 1959 when he learned that his father was ill – only to discover later that it had been a family plot to bring him home.

Subsequently he had a spell working in the USA. He returned home a second time in 1961, and soon married his first wife Valerie, also known as Birdie. 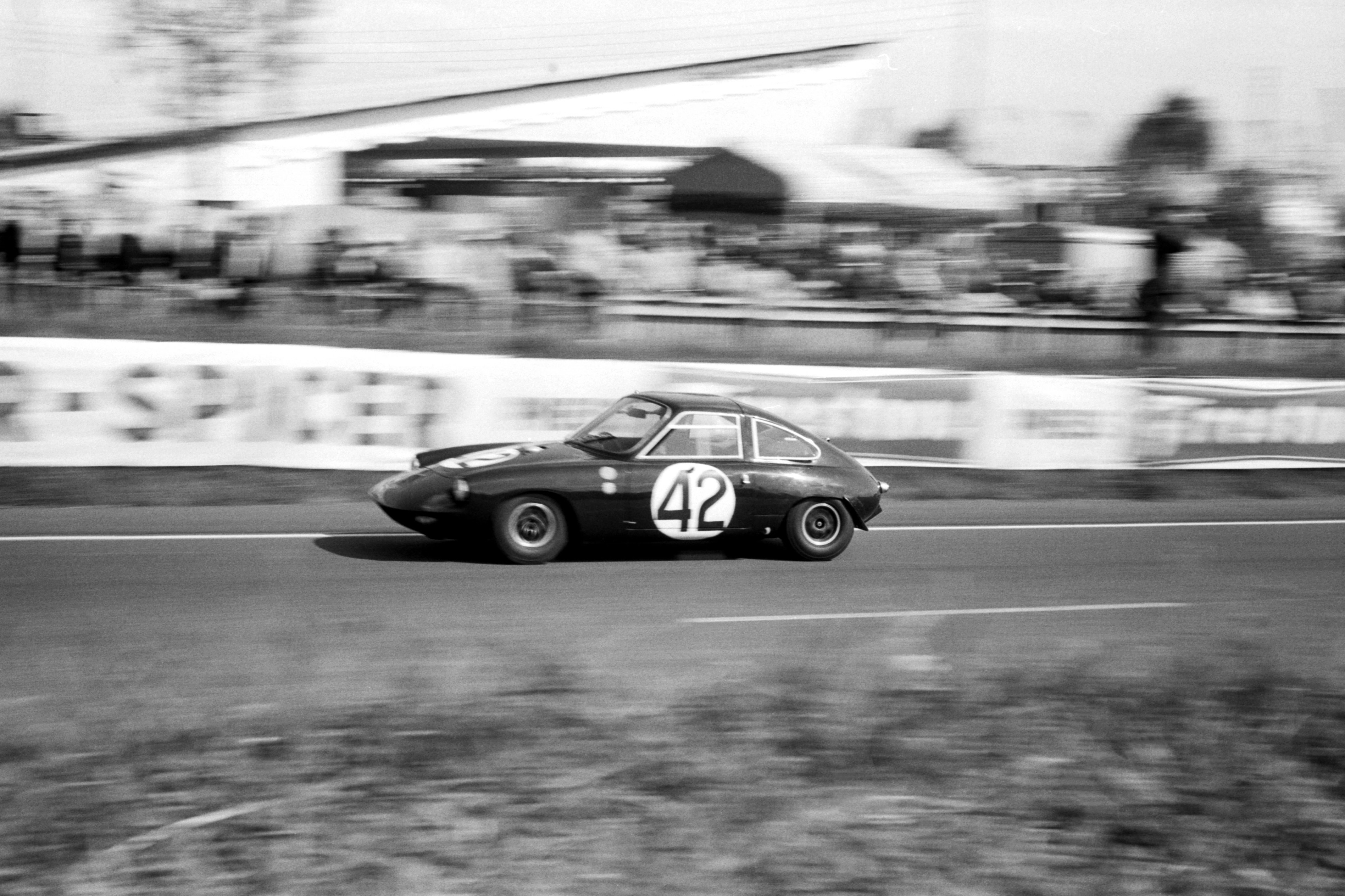 By then his older brother Derek, known as Dee, had done some racing with an Austin A40. Having sampled the car on a test day at Goodwood Spice decided to have a go himself.

He bought an MG TF – having previously owned one in Australia – but the car proved to be disastrously unreliable on his early outings with it in 1962. He replaced it with a Morgan in 1963 and soon made rapid progress, so much so that in 1964 he made his first appearance at Le Mans, sharing a Deep Sanderson with Chris Lawrence.

He really began to make his name from 1965 onwards racing Minis, and in 1968 he won the 1000cc class of what was then the British Saloon Car Championship (now the British Touring Car Championship). At the same time he was kept busy building up a successful car accessory shop business.

On track he continued to star in Minis until 1970, when he doubled up with an ambitious switch to the European F5000 championship with a Kitchiner. This was a huge step given his lack of single-seater experience, but he finished as high as fourth overall at Monza and fifth at the Salzburgring before the money ran out.

Spice ran only a few events with an F5000 McLaren M10B in 1971. They included two that allowed him to mix it with F1 machinery, namely the non-championship Argentine GP in Buenos Aires, and the Victory Race at Brands Hatch, where sadly Jo Siffert was killed. 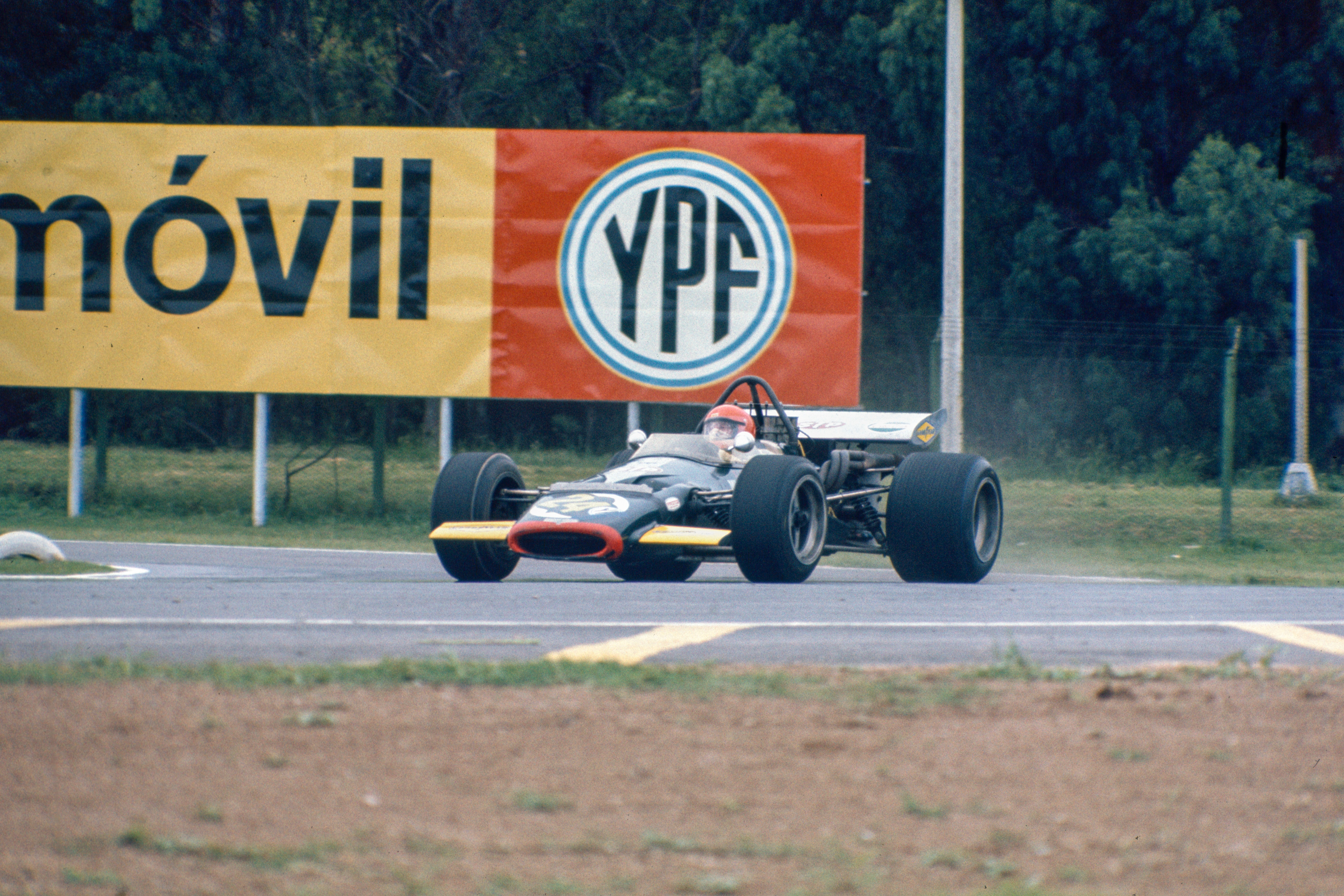 His 1972 F5000 season with the rebuilt and renamed ‘Kitchmac’ was equally short, mainly because he focused on business, but he took pole at Mallory Park and led at Snetterton.

In 1973 Spice stepped back to saloons, racing the car that would eventually see him make his mark in the history books – the Ford Capri. He scored two wins and finished a close second to James Hunt on the Tour of Britain.

Having got divorced from Birdie earlier that year he also met his future second wife, Mandy, on a blind date. Always fond of nicknames, he would affectionately refer to her as ‘Creech’, shorthand for creature.

Spice barely raced at all in 1974 after an ambitious project to race a Plymouth Hemicuda failed to come together.

Having found funding, he returned to F5000 in 1975, this time with a Lola. He began the year with a superb win in the Oulton Park Gold Cup, but his season ended early after a testing crash at Mallory Park left him with serious injuries. He would never again race a single-seater.

For the next few years the Capri would be his main focus, and Spice’s 1976 BTCC class title was followed by five more in an intensely competitive category, his car latterly run by his own team.

He also raced extensively in Europe, winning the 1978 Spa 24 Hours with Teddy Pilette – it was the last event to be held on the daunting old track.

"Gordon was an exceptionally good driver,” recalls four-time BTCC champion Andy Rouse, who was Spice’s Capri team-mate and rival in 1980. “He was one of those rare guys who could afford to go racing and was good at it – usually you can afford to go racing, or you're good at it but don't have the money. He was a good fun guy to be around. 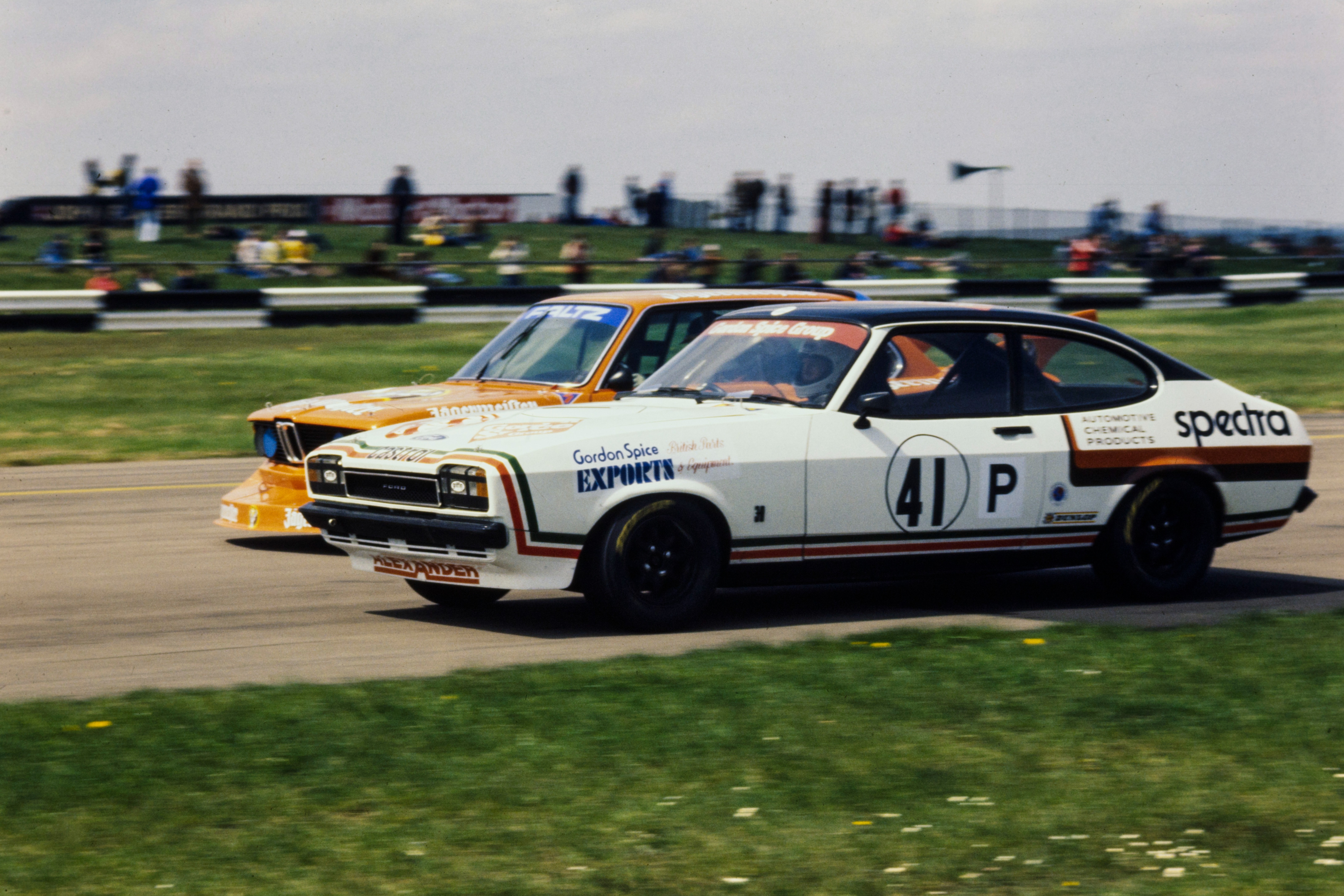 “He was a good businessman, he was a good manager, whereas I was an engineer. His team was really good and of course he had Keith Greene as team manager, who was also a fun guy."

Triumph Dolomite ace Tony Dron, who was one of the few to take on the Capri hordes, agrees: “Gordy was a top bloke to race against. He was seriously quick, consistently ‘on it’ all the way and he never went in for any dirty tricks.”

Having scored 28 overall wins (including a shared victory) and after two final seasons in the BTCC in 1981-82 saw the rival TWR Rovers dominate, Spice switched his focus to sportscar racing.

He’d had an outing at Le Mans with the hopeless Japanese Dome in 1979, and in 1980 he raced in the 24 Hours for the works Rondeau outfit, finishing third overall behind the winning sister car.

He returned with the French team in 1981, scoring another third place. He was back with Rondeau in 1982, also racing for the team at Silverstone and Spa, sharing at the former event with Henri Pescarolo.

Having established his credentials in the new Group C category the plan for 1983 was to run a works Ford C100 in the world sportscar championship, alongside then current F1 driver Marc Surer. However just before the season started Spice was left in the lurch after Ford cancelled the programme.

He subsequently became involved with a Tiga project originally put together by Australian Neil Crang. In 1984 together with third driver Ray Bellm they dominated the Group C Junior category under the Gordon Spice Racing banner, although there was no drivers’ title that year.

That oversight was corrected under the new Group C2 name in 1985. Spice shared his first crown with Bellm, having by now formed Spice Engineering to develop and run the car. The pair repeated the feat in both 1986 and 1988, with Gordon also taking the 1987 title with Spaniard Fermin Velez. He also scored three C2 class wins at Le Mans. 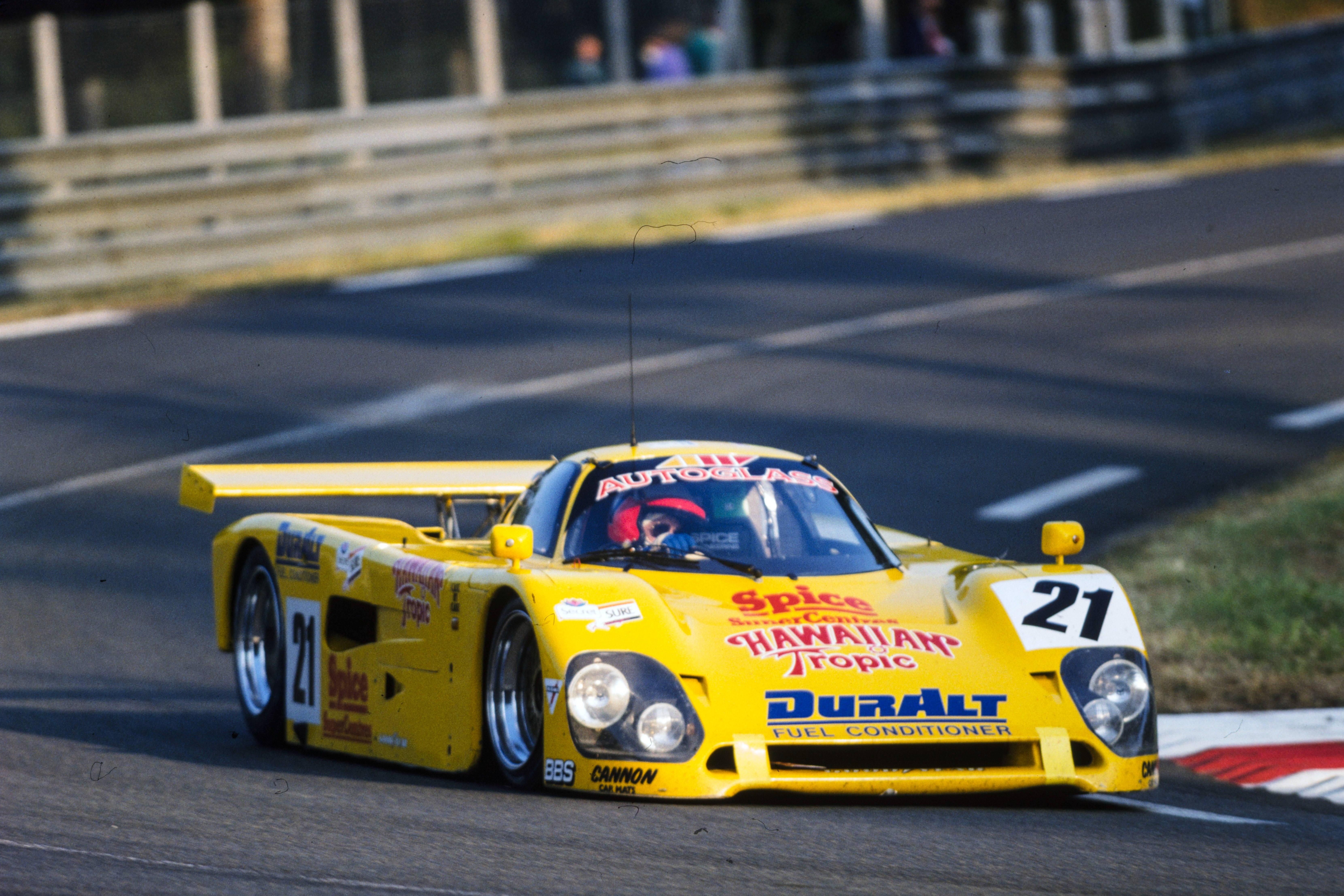 In 1989 the company graduated to the main C1 category with a DFZ engine, competing directly with Sauber-Mercedes, Jaguar, Nissan, Toyota, Porsche and Aston Martin.

Fighting problems with his accessory business, which was by now a public company, Gordon stepped down to make way for drivers with sponsorship. He thus made his only outing of the year at Le Mans, sharing with Bellm and Lyn St James. That weekend he decided that it would be his last race, and he retired at the age of 49.

The cost of running in the top class, not helped by the failure of a driver to pay his sponsorship bills, caused financial problems at Spice Engineering. At the end of 1990 Spice and partner Bellm ended their involvement with the company.

Spice remained busy away from motor racing, pursuing a variety of business ventures, and spending time in Zimbabwe, a country he loved.

In 2009, shortly after surviving a cancer scare, he published a superb autobiography, Life of Spice. It covered not just his racing career but his colourful social life, his ups and downs in business, and his successes as a property developer along the River Thames in Berkshire, where he lived for much of his life.

Autosport sends its condolences to Mandy, their son Patrick, and to Gordon’s many friends in the sport. 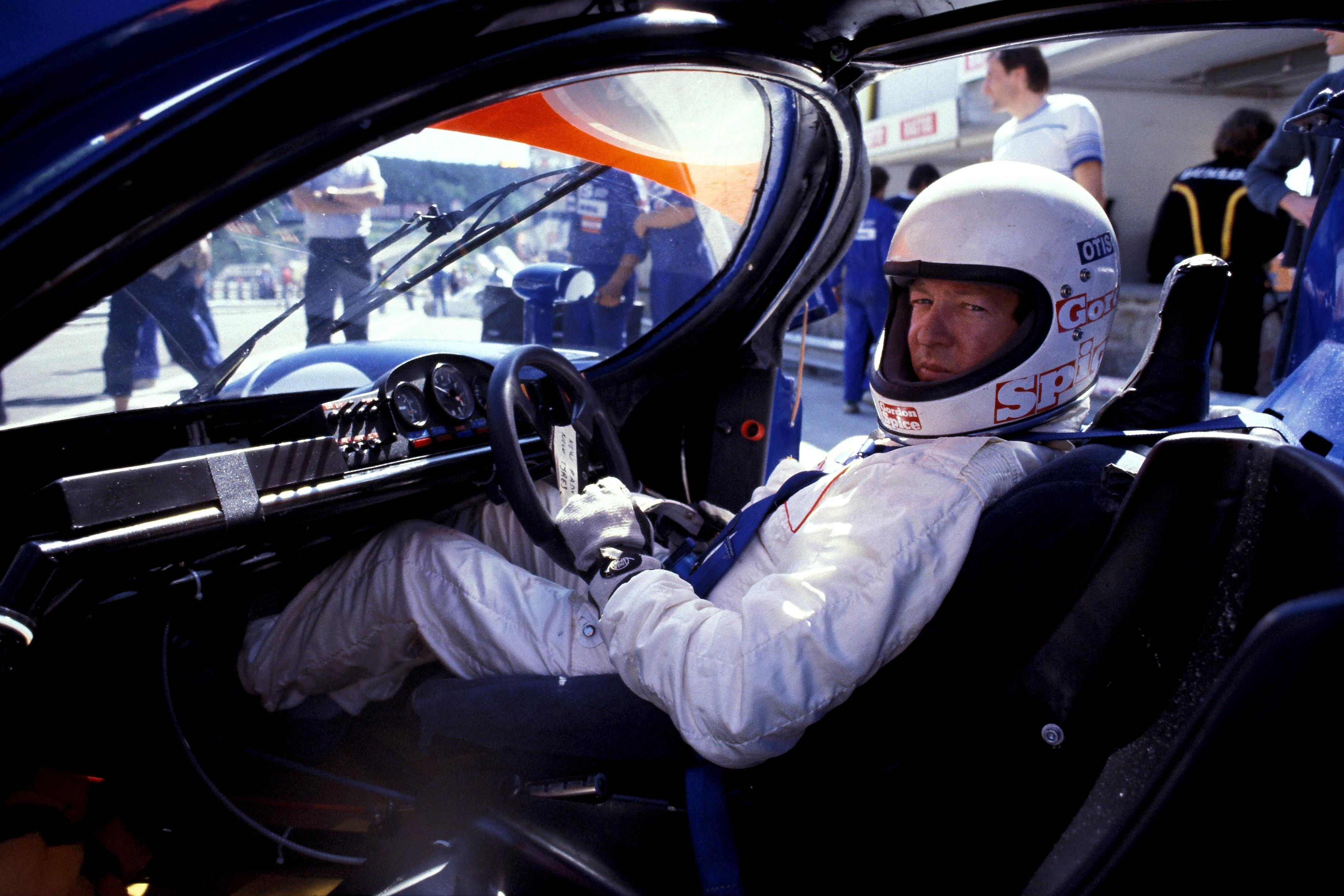