In a new documentary, that aired for the first time on Saturday, November 4 on Motorsport.tv, Formula 1 technical legend Giorgio Piola's life and passion for the sport is uncovered

There is nobody quite like Giorgio Piola in the F1 pitlane. Sure, there are other technical experts, others who strive to understand F1 like he does, but nobody has the depth of experience or history of the sport's greatest technical illustrator and journalist.

Featuring exclusive footage of the man at work, plus interviews with him and many of his technical peers up and down the pitlane, the film produced by Allen Content puts the spotlight on the 'Michelangelo' of Formula 1.

Motorsport.tv subscribers can watch the documentary on demand here.

Piola's career started as a bet between brothers: a friendly challenge to settle the debate as to whose illustrations were strong enough to be published in the leading motorsport magazines of the era.

Giorgio won, racing headfirst into a career analysing the technical designs of F1 machines and quickly taking pole position in an industry that didn't exist before he proposed its creation.

For the last 40 years, Giorgio has profiled each change in design and engineering for every car on the grid.

In a series where victory is determined by mere hundredths of a second, it is often the most minute change that makes all the difference.

"This is my life and my love for working in Formula 1," says Piola.

"I glance at a car and the differences stick out, as if there's a magnet. Without knowing it, I was always training myself for my future profession.

"What I also like in my work is that it's very psychological. Very often I found a new solution only from reading the behaviour of people." 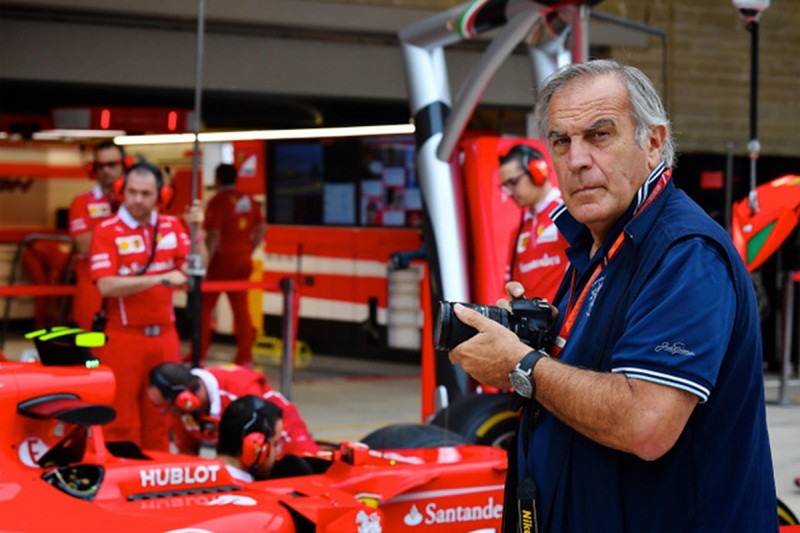 To watch him at work is a privilege, an anecdote from Autosport's Nigel Roebuck recounts a time at Interlagos, for the Brazilian Grand Prix, when they shared a house which had - to Giorgio's utter horror - no tables upon which to draw.

But Piola is an unstoppable force, and Roebuck sat back and marveled as Giorgio (or 'George' as Nigel playfully calls him) simply took his drawing paper to the wall and drew everything standing up.

To find Giorgio in his natural habitat is to see him in the F1 pitlane. Armed with his camera slung over his shoulder for any opportunistic sight of an exposed brake duct, sidepod or - heaven forbid, if the mechanics are in a rush - engine bay.

When he's satisfied, he ventures to the paddock, to corroborate what he's seen with his trusted technical players in the teams.

They are a secretive bunch at the best of times, but Piola has earned their respect with his accuracy - from aerodynamics to hydraulics systems to engine architecture and everything inbetween.

And he's been doing this for decades, producing works of art from an accurate, technical angle - you can find them all in his technical archive on Motorsport.com PRIME.

"You couldn't fail to be impressed by what he was doing and what he captured," says Patrick Head, the former Williams technical chief.

"It's wonderful to see somebody as enthusiastic [now] as 25 years ago."

Former Mercedes boss Paddy Lowe, who is also now at Williams, adds: "Often he knows better than me what new thing we might have on the car - it can be quite embarrassing!"

What is it really like to try to find a job in motorsport?