The German's participation was last-minute and came about when he discovered the series was at the French circuit to test the Pirelli tyres it wants to use when it makes its planned debut in 2017.

Frentzen described it as "great fun" and said the series was "definitely heading in the right direction."

Series CEO Mark Gemmell claimed the test - which covered 40 laps overall - was a success and also said Frentzen's feedback from his short run was also valuable.

"We were glad to have Heinz-Harald come to the track," he said. "Other than the fact he's a supremely talented driver, he is a fan of Teslas and owns two cars himself, which is great.

"We were able to meet up and talk him through the championship, before arranging a test drive for him later in the day.

"He gave us some great feedback."

WHAT IS THE ELECTRIC GT CHAMPIONSHIP?

The plan for the Electric GT Championship was made public back in March.

Its aim is a 10-team, 20-driver series that uses adapted Model S P95+ machines and runs on a calendar utilising European racetracks.

The race weekend format would comprise one 20-minute practice session, a 30-minute qualifying session and two "60km" races, one in the day and one at dusk. 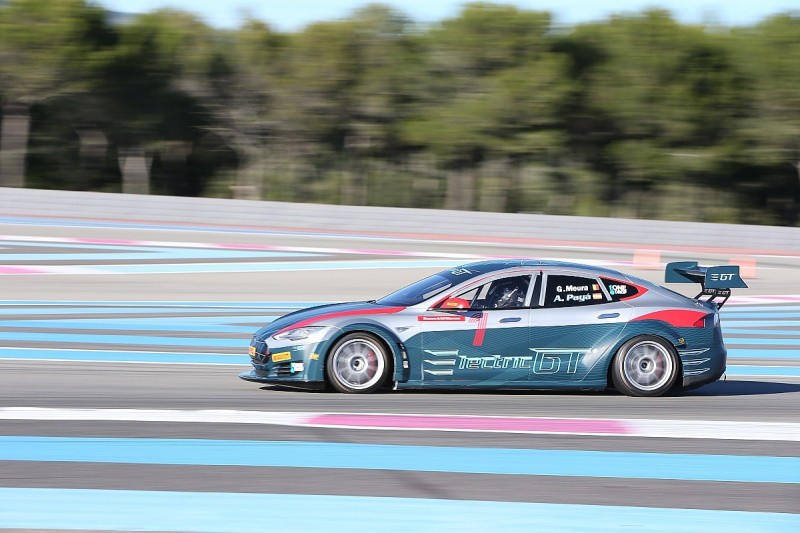 Formula E CEO Alejandro Agag told Autosport back in March, when the Electric GT plans were announced, he would welcome the series as a support to his electric single-seater championship if it was logistically possible.

"I wish them luck, it's pretty cool.

"If it works, it [running on the same package] would be amazing. They want to race on regular tracks.

"You put a Tesla in the wall it's quite expensive and I'm not sure if the weight and speed of the car can be on Grade 3 tracks [such as the street tracks used by FE]."