AFRIX Motorsport, which is aiming to establish a new South African series around the second-generation A1GP single-seaters at the end of next year, was able to run the one of the cars after engaging Life Racing in the UK to produce new electronics for its Ferrari direct-injection V8 powerplant.

A new system had to be developed because the sale of the 21 cars did not include the Magneti Marelli electronic control units, which had been returned to Italy at the end of the 2008/09 season prior to the series going into administration.

The car ran for four days at the South African Phakisa Freeway circuit near Welkom, 250km south of Johannesburg, with former Champ Car driver Dan Clarke at the wheel.

Alan Eve, one of the partners in AFRIX, told Autosport: "Dan got out the car and was gobsmacked, he said you couldn't believe the horsepower and the torque.

"We weren't running at full throttle, so there's probably 70bhp to come, but the sound was still amazing.

"Life has done an amazing job and the partnership is working really well."

The chassis and aerodynamics remain unchanged from the 2008/09 configuration.

The car ran one of the original steering wheels, but because all but one were also removed after the final A1GP event at Brands Hatch in May 2009, AFRIX will be developing a new wheel together with Life.

"Phase 1 was the new electronics and phase 2 is the new steering wheel," explained Eve.

"Once the design of that is fixed, we will start replicating it for all the cars.

"In the meantime we will be starting to talk to drivers about our series."

AFRIX is planning a series that would start next September and run through the South African summer of 2016/17.

It has aspirations to take the series elsewhere in Africa and to hold a street race in Johannesburg. 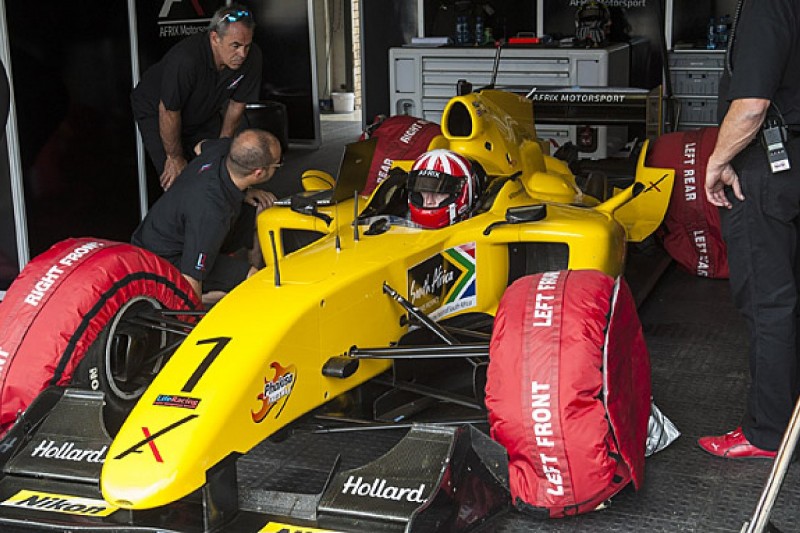 Will Palmer was sure he had lost McLaren Autosport BRDC Award