Borkovic, who drives for a Target Competition Hyundai, was hit by the M Racing Hyundai i30 N of Nelson Panciatici on the final lap of the second race while they battled for fifth place.

A notice issued by TCR on Sunday, which announced Borkovic had been excluded from the race, reported the Serbian had "tried to tear open the car door to reach the driver of car #25 [Bihel], knocking over a woman in the process".

A further statement was released on Tuesday, which said: "the series promoter has sent a notice to the driver Dusan Borkovic to inform him that he is no longer welcome to the TCR Europe events during the current season".

"We took this action with regret, but had no other choice," said series promoter Paulo Ferreira.

"As the series promoter, we cannot remain as mere spectators of this unfortunate event.

"Violence cannot go unpunished in an event that is open to the fans and covered by the media.

"Very often the drivers are the models for young people who wish to enter the world of motorsport and it is precisely because of this philosophy that we can no longer tolerate aggressive behaviour." 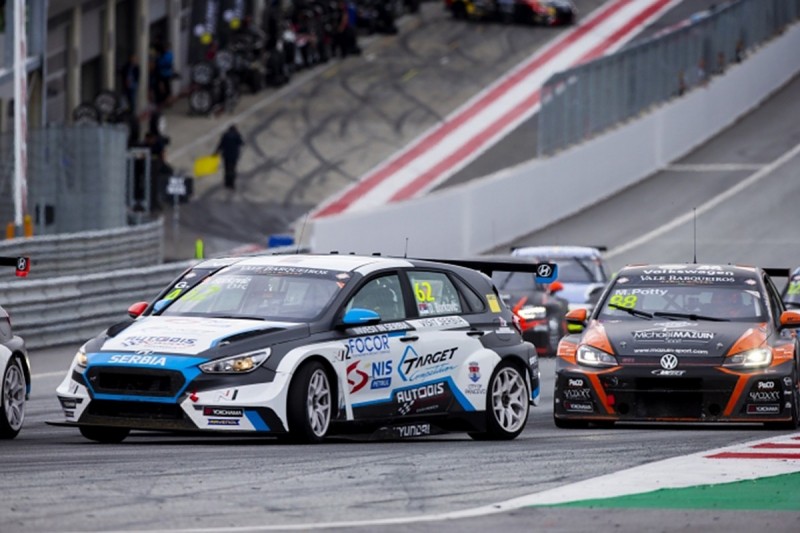 It is the second time Borkovic, who was an occasional World Touring Car Championship racer but quit the series in 2015 in part due to difficulties fitting into his Proteam Racing-run Honda Civic, has been involved in an altercation in the TCR Europe paddock.

Borkovic was excluded from both races at last year's Monza round for his involvement in a fight in the paddock.

The statement suggested the fact Borkovic had "lapsed into this behaviour" again after his Monza exclusion contributed to his ban.

It also said he would be reported to the "relevant National Sporting Authorities and the FIA".

"We tolerated what happened in Monza last year, with the aim of giving a second chance that in our ethical code is worthy of being given to those who repent and apologise for their mistakes," added Ferreira.

"But now the time for tolerance is over."

Borkovic finished third in the standings last year behind current World Touring Car Cup drivers Mikel Azcona and Jean-Karl Vernay, but is only 11th in this year's standings and had not scored a podium before his ban.

His Target team-mate Josh Files leads the championship by 36 points from Luca Engstler, who won race two at the Red Bull Ring, after achieving his second victory of the season and a second place in Austria.

The field also included previous World Touring Car drivers Mato Homola, Aurelien Comte and Gianni Morbidelli, as well as Indy Lights champion Santiago Urrutia and single-seater convert Luca Filippi - who led the final race until he crashed when he and Engstler made contact three corners from the finish.

You can watch all of this season's remaining TCR Europe races live, and catch up with all of the action so far, on Motorsport.tv.