The 49-year-old was part of the three-man Italian team that dominated the H2-H5 mixed team relay at Pontal in Rio de Janeiro.

Zanardi was third in the rotation on the three-man team, taking over for the first time on the third leg of the race after Vittorio Podesta and Luca Mazzone completed the first two.

Podesta ended the opening leg in third place, with Mazzone then moving into the lead when he took over before handing over to Zanardi.

Zanardi extended the lead over the USA from 13 to 21 seconds before Podesta took over again as the trio rotated in the same sequence.

The Italian team went on to consolidate its lead, with Zanardi maintaining the 40s advantage he was given on handover during his second stint.

Zanardi then closed out victory in the final leg, taking over with a minute in hand over the USA team's Oscar Sanchez and crossing the line to win by 47s after a brief scare when he almost hit a dog.

"On my final lap, I encountered the biggest risk of our day: a big dog crossed the road just round a corner, which was quite blind," said Zanardi.

"I did not hit the dog, but I had to slap it with one of my hands to get it out of the way.

"It was pretty funny because that would have been the only way we could have lost it, strong as we were."

This is Zanardi's second gold medal of the 2016 Paralympic games, the first coming in Wednesday's H5 time trial. 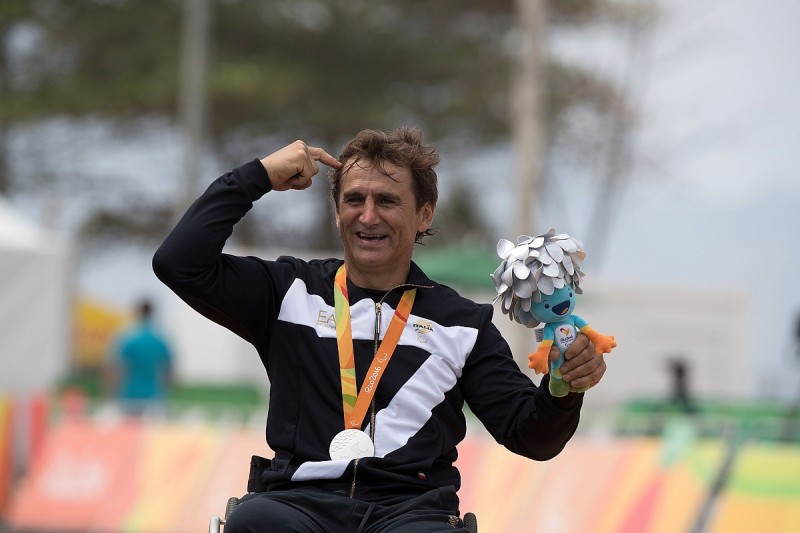 Zanardi also claimed a silver medal on Thursday competing in the H5 road race after being pipped to victory in a sprint finish by South African Ernst van Dyk.

Following that race, Zanardi admitted he had not recovered from the time trial the day before, but he was always confident he would be "back in the racing mood" for Friday's relay.

"It was a difficult race," he said after winning the road race silver medal on the 15th anniversary of the Champ Car accident that led to his legs being amputated.

"Sometimes you cannot control your emotions and when I had won gold, I was very proud but psychologically I simply collapsed.

"All the pressure I had put myself under, but that I tried to ignore all the time, fell off my shoulders.

"I was not in the racing mood that normally pushes you, that makes you forget that you have less sleep and that helps that you don't feel the pain in the muscles.

"I felt empty in the beginning and it was a very tiring race for me.

"To bring home the silver medal under these circumstances is a great and fantastic achievement."

This was Zanardi's second Paralympic silver medal, as he also claimed one in the H1-H4 team time trial at London 2012.