The Italian squad has today confirmed its driver line-up for the new season, which sees FIA Formula 3 graduate Viscaal join the team alongside Sato, who will enjoy a second season with the outfit.

Viscaal makes the step up to F2 after finishing 13th in the FIA F3 standings last year with MP Motorsport.

The 21-year-old Dutchman showed flashes of potential in his second F3 campaign last year, highlighted by a victory at Silverstone [pictured below].

According to the team release, Viscaal is only confirmed for the opening round at this stage.

"I cannot wait to make my debut in the FIA Formula 2 Championship with Trident Motorsport," said Viscaal, who tested with the squad in Bahrain last year.

"I will be on-track for collective pre-season testing in just about two weeks, and I am really excited.

"We did great preparation work. I have been aware of the value of Trident Motorsport for quite some time, and it's finally time to work together.

"I am sure that we will achieve great results."

Meanwhile, Sato has been retained by the squad after a tough first full season in F2 last year that yielded a solitary point, courtesy of an eighth place finish in the Mugello sprint race.

"We had a very tough season last year but we were improving race by race. I need to thank everyone who's Involved to make this happen." 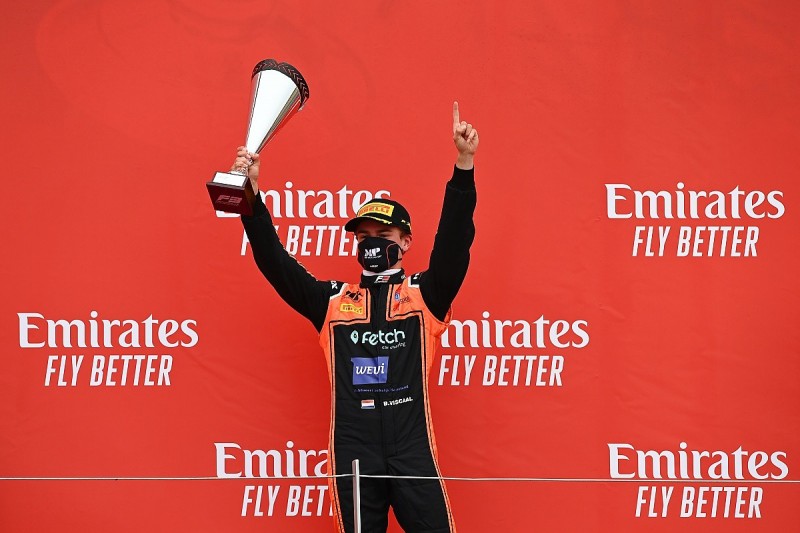 Trident boss Giacomo Ricci added: "Trident Motorsport is greatly satisfied to announce that Bent Viscaal will make his FIA Formula 2 Championship debut under the team's banner in the opening round of the season at Sakhir.

"We had Bent with us for one day of testing last December in Bahrain, and we had the chance to appreciate his speed skills multiple times.

"We remember the win he snatched from our driver Zendeli last July at Silverstone in the FIA Formula 3 Championship.

"We are convinced we will be able to reach great results together, and we will provide him with our best support to help him to find his fit with our family as quickly as possible.

"In the 2020 championship, Sato showed remarkable progress that makes us confident in his potential ahead of the new season, which will start at the end of March at Al Sakhir.

"I strongly believe that the new format of the series, featuring three races with reverse grids, will enable Marino to cruise to the points zone repeatedly and continue his growth in the FIA F2 Championship."

Only one seat remains on the F2 grid for 2021 with MP Motorsport the last team to confirm its full-driver line-up.

F2 teams will head to Bahrain next week for a three-day test on 8-10 March before the opening round of the season on 26-28 March.