DAMS driver Latifi trailed runaway points leader Nyck de Vries by 34 points entering the Monza weekend, but had a chance to recoup some points when he qualified sixth and de Vries was thrown out of qualifying after running out of fuel on track after the session ended.

But Latifi clashed with Renault F1 junior Guan Yu Zhou - for which the latter was given a three-place grid penalty - in the feature race and picked up a puncture, dropping to 13th.

ART Grand Prix driver de Vries stormed through the field to take a podium from 17th on the grid, then finished third again in the sprint race on Sunday to extend his gap over Latifi, who was a point-less 10th.

"[It] was my mistake, driver error," said Latifi.

"The track looked completely dry but at Turn 3 - the long flat-out right-hander - I was caught out by a damp patch in the shade under the trees.

"I hit it at high speed, spun, and flat-spotted all four tyres.

"The fronts were especially bad.

"After that I didn't have a chance to fight.

"I was missing so much performance from the tyres in the corners, understeering everywhere and with such massive vibrations on the straights I almost couldn't see through my visor.

"My race was over before it started. It's a huge shame and I feel bad for the team - they deserved more from the weekend. All I can do is learn from it and move on." 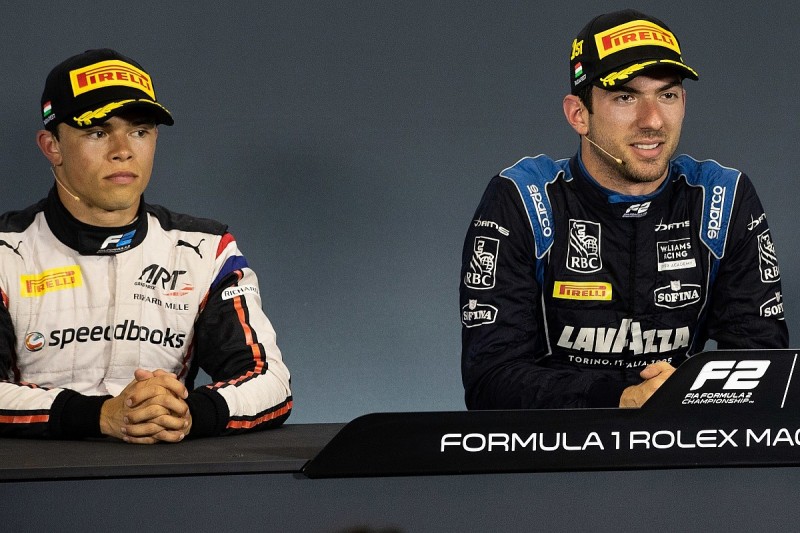 De Vries now leads by 59 points with a maximum of 96 still on offer and Latifi, who is favourite to land Williams's second F1 seat next year alongside George Russell, said the title race is "out of his hands".

"He [de Vries] needs to have DNFs in each of the last two weekends, which is possible," Latifi told Autosport.

"Anything can happen. I'm quite confident of our pace going into Sochi. Unfortunately the championship is out of my hands now, it's his to lose.

"It seems too many things are going out of my control. It's obviously very frustrating but it's a part of sport.

"The championship battle is still on mathematically, but he's quite far ahead of me."