Leclerc, who has set the fastest lap in every F2 qualifying session so far in 2017 but was stripped of pole last time out in Hungary due to a technical infringement, set a best time of 2m20.842s.

Latifi and Rowland - the closest driver to Leclerc in the championship standings at 50 points adrift - were the only ones able to get within one-second of the top spot, finishing 0.668 seconds and 0.736s behind respectively.

The Belgian circuit was wet from the outset following a huge downpour that began towards the end of the day's earlier second F1 practice session, but slowly began to dry out as the F2 field circulated on the wet Pirelli tyres.

McLaren F1 junior Nyck de Vries and Luca Ghiotto both had short holds on first place before Leclerc surged into the lead with seven minutes of the 30-minute session completed.

The Monegasque driver was then briefly deposed by Latifi and his Prema Racing team-mate Antonio Fuoco but Leclerc soon re-established his grip on first place.

He improved again shortly after that effort to set the best time of the day before a mid-session lull took place as the drivers headed for the pits.

When the action resumed, Latifi pushed Rowland down to third while Artem Markelov, who saved a big moment going through Eau Rouge in the first half of the session, set the fastest time in the first sector.

But the Russian Time driver had to abandon his lap as the red flags came out due to MP Motorsport driver Sergio Sette Camara spinning off on the run between Turn 9 and the sweeping long left of Pouhon.

Sette Camara could not get going again and the session was suspended with just under four minutes remaining.

Though the field was able to make it back out on track for a last dash to complete a final timed lap after Sette Camara's car was recovered, the rain returned and no drivers were able to improve. 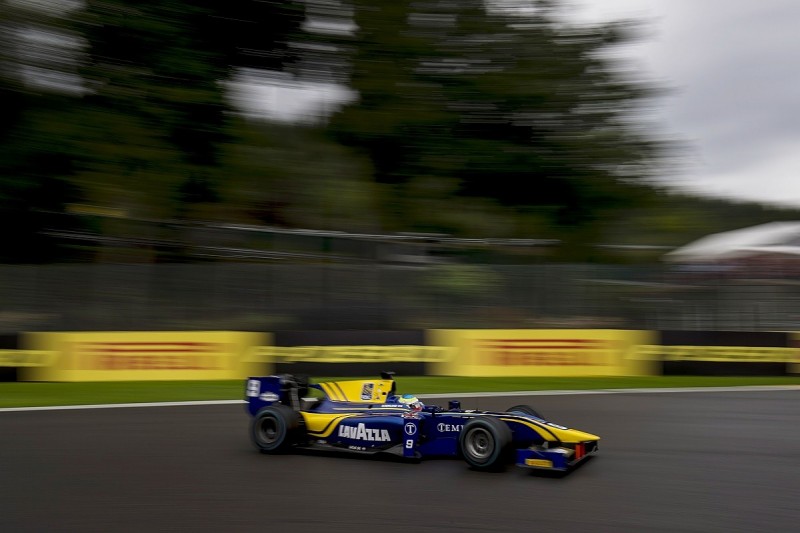 Renault F1 development driver Rowland, who charged past several cars on his out-lap, went off at the Bruxelles hairpin on his final flying lap but was able to keep his car out of the barriers.

Leclerc set a personal best in sector one but went off at Les Combe, touring around after that to the complete the lap where his pole position was confirmed as the chequered flag fell.

Gustav Malja was fourth fastest for Racing Engineering, ahead of Fuoco, and his new team-mate de Vries was sixth.

Ghiotto ended up seventh ahead of former F1 driver Roberto Merhi - who is returning to make his second F2 appearance of the season with the Rapax squad after competing at Barcelona with Campos Racing - and Markelov.