At one point during the session the top six was separated by 0.051s around the 3.6-mile track, but Zhou emerged in the closing stages with a phenomenal 1m38.182s, three tenths clear of the chasing pack.

Zhou's practice-topping team-mate Luca Ghiotto improved in the closing stages to trail by just over two tenths and lock out the front row for the team formerly known as Russian Time.

"That's what I'm talking about boys," Zhou shouted over the radio, the Chinese driver already lying ahead of all the F2 rookies in the points' standings, targeting an overall victory in the second half of the season.

His rivals chased hard, aware that the feature race has not been won by anyone other than the polesitter since 2014.

The resurgent McLaren-affiliated Sergio Sette Camara - who took a win at the last round in Austria - steered his DAMS-run car to third, beating his Williams-linked team-mate Nicholas Latifi.

Despite a crash with Sean Gelael in practice, Carlin's Louis Deletraz gave the reigning teams' champions a top five starting position, while Callum Ilott's much improved form continued with sixth - just over 0.3s off pole. 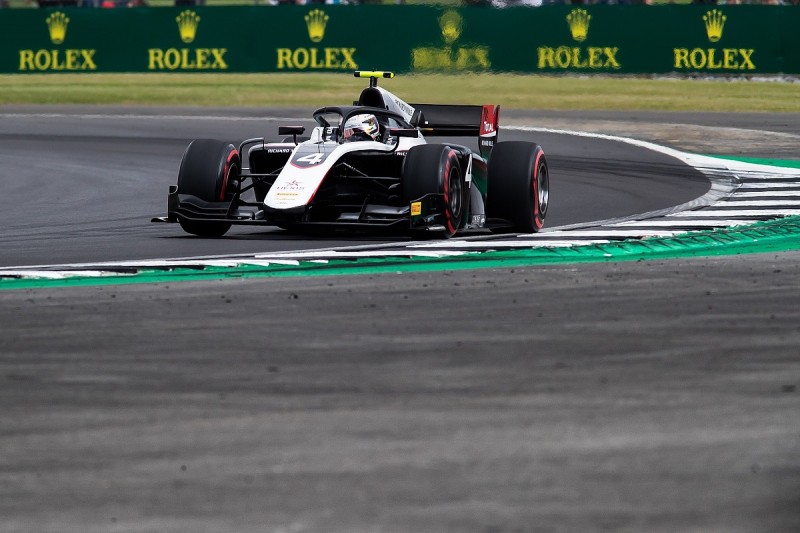 Points leader Nyck de Vries appeared to be struggling in practice, and carried that through to qualifying too.

De Vries was 0.4s off pole, one tenth clear of British-South Korean driver Jack Aitken who had looked like a challenger for the top spot until a slightly scruffy last lap destroyed his chances.

Mick Schumacher will start 13th. The Ferrari-supported Prema Racing driver's strategy of running in the middle of the session while the other drivers debriefed has proved successful so far this season, but he encountered traffic which ruined his lap which had started around the pace of the leaders in the first sector.

Dorian Boccolacci scored 15th in his first race for Trident, after missing the Red Bull Ring races following his split with Campos Racing.

Mahaveer Raghunathan - who was banned for Austria after reaching too many penalty points on his licence - returned to MP Motorsport and finished last, 3.5s off the pace.

Following his practice collision with Deletraz, Gelael was handed a penalty after qualifying.

Deletraz, who was in the centre of the track at Brooklands, was hit by Gelael - on a hot lap - towards the beginning of the session, which effectively ended the Prema driver's session.

Gelael had qualified 18th and now starts 20th and last.