Nyck de Vries took a phenomenal win in the Formula 2 feature race at Paul Ricard, earning the points' lead as a result

ART Grand Prix driver de Vries jumped from fourth into the lead at the start as Sergio Sette Camara - the DAMS polesitter - suffered a poor getaway.

Drama immediately ensued behind, as an out of control Sean Gelael careered into his Prema Racing team-mate Mick Schumacher, bringing out a virtual safety car.

That was upgraded to a red flag when Dorian Boccolacci, the highest-placed driver on an alternate hard-tyre strategy in eighth, came to a halt.

When the race resumed, most of the drivers who started on soft tyres ditched them before 10 laps had elapsed. De Vries went a lap longer than Aitken at this point, and lost the lead as a result.

Incredibly, de Vries got back ahead of Aitken on cold tyres at Turn 8, as attention turned to the incredible run of Luca Ghiotto.

He had started 14th but benefitted from the early retirements, the red flag and starting on the hard tyres to lead the majority of the race.

He pitted with 10 laps remaining and emerged in a net fifth, but then reported that his steering was "so heavy" and struggled to make further progress, despite being on fresh soft tyres when others were nursing aging hards.

His bad luck continued when he was given a five-second penalty for speeding in the pits, and then contact with Juan Manuel Correa put him out for good with a broken front-right wheel. 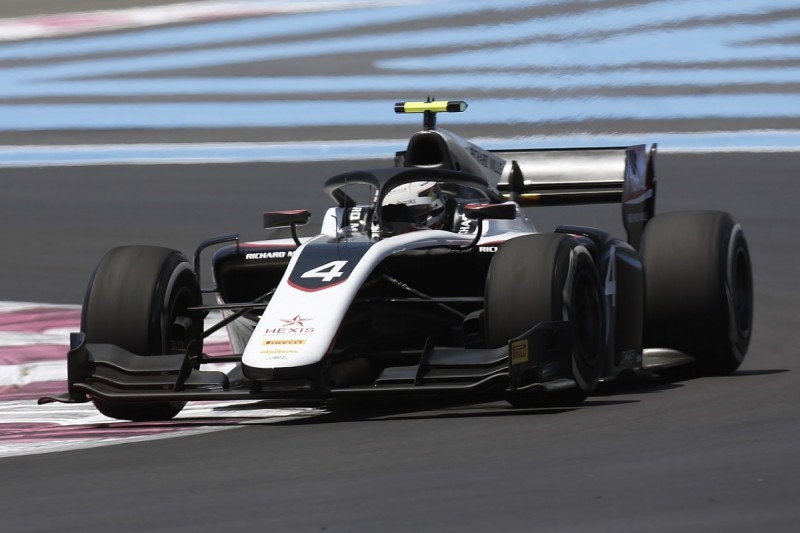 A VSC followed with five laps remaining, but de Vries's lead totalled 8.3 seconds as he earned a fantastic third win of the season - a perfect response after crashing heavily during last weekend's Le Mans 24 Hours.

Aitken held net second for most of the race, but McLaren junior Sette Camara - who appeared to have radio issues in the closing stages - battled past him on the penultimate lap at Turn 1 to salvage second after slipping back from pole.

Jordan King pitted latest of anybody and used fresh soft tyres to take a brilliant sixth from a 16th-place start.

Correa had an eventful race but survived the contact with Ghiotto and finished seventh, ahead of home hero Anthoine Hubert.

Nobuharu Matsushita made a mistake attempting a pass on Correa with a lap to go, gifting GP3 champion Hubert the reversed-grid pole on what had been a woeful weekend for himself and the Arden team up until that point.

Matsushita and Giuliano Alesi rounded out the points-paying positions.

Schumacher: No malice by team-mate Gelael after France F2 crash