F2 rookie Hubert had had an eventful feature race where a slow pitstop and brake issues dropped him down the order, but the reverse-grid pole was some consolation.

He was never headed during Saturday's race, one of his biggest challenge managing two safety car restarts.

Both safety cars were caused by incidents involving Luca Ghiotto, third in the championship and excluded from Friday's feature race.

He was dicing with Tatiana Calderon's Arden car as she ended up in the wall at Mirabeau, while an optimistic dive up the inside of the Loews hairpin then sent both Ghiotto and Mahaveer Raghunathan into the barrier just a few laps later.

Hubert managed both restarts with excellent drives off the final turn, but he did have to hold off a late charge by Deletraz.

The Carlin driver closed in late and pestered Hubert for the win. Deletraz dropped back slightly in the second sector of the last lap and it was just enough for Hubert to hold on.

Deletraz tried to draw alongside out of the final corner and the pair crossed the line with '0.0s' on the timing screens, half a car length the distance between them and 0.059 seconds the final official gap. 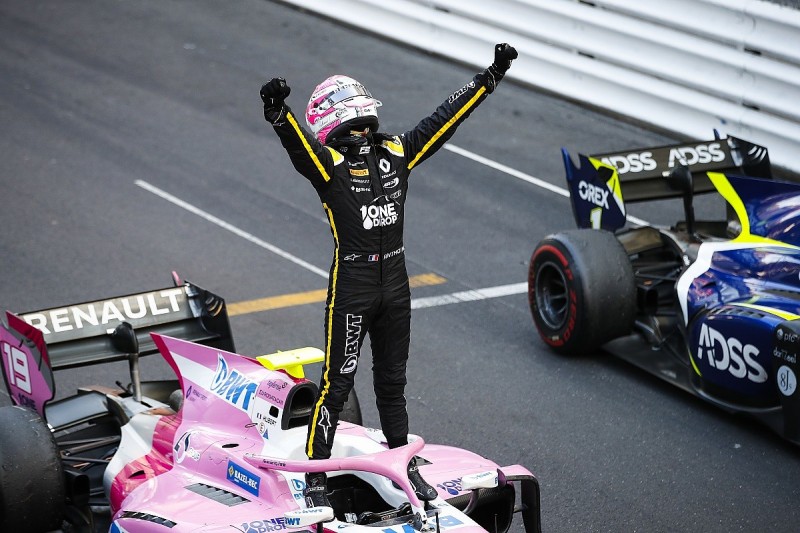 Hubert proved that Arden's early season strong race pace is no fluke, even if it still needs to work on qualifying, which also improved in Monaco, and was praised with "viva la France" by Irish team boss Kenny Kirwan, and greeted by his father, brother and girlfriend as he emerged from his car delighted.

Deletraz earned his best result of the season since switching to Carlin, having also scored second in last year's sprint race.

Guan Yu Zhou and Artem Markelov joined Hubert and Deletraz in racing away in the early stages.

It was clear Markelov - driving for MP Motorsport in place of Indianapolis 500-bound Jordan King - was faster but rookie Zhou defended brilliantly.

Zhou, Ghiotto's Virtuosi Racing team-mate, had raced from 16th to fifth in the first race and bettered that with his second F2 podium, right on the leaders' tail at the flag.

Markelov ran off at the Swimming Pool exit, using the escape road, and struggled to trouble Zhou thereafter, almost hitting the wall at Ste Devote on the last lap.

Behind Markelov, with a 10s gap for most of the race, Dorian Boccolacci was the cork in the sprint race bottle as he backed up the back behind. But he wouldn't be beaten, heading Sergio Sette Camara's DAMS-prepared car.

Nyck de Vries moved up one spot from his eighth-place start after winning the feature race.

Latifi retains a one-point championship lead over de Vries by virtue of setting second-fastest lap and picking up the two bonus points because actual fastest lap setter Sean Gelael finished outside the top 10 in 15th after a clash with Giuliano Alesi.