Polesitter de Vries had jumped into an early lead for ART Grand Prix, with Virtuosi Racing's Luca Ghiotto and DAMS' Sergio Sette Camara all completing similar lap times behind him on the soft tyre in the opening running.

Behind them, fourth place qualifier Schumacher had got a poor getaway, despite having a space clear in front of him because his fellow Ferrari junior Callum Ilott had to retire from second on the grid when "the car just turned itself off".

De Vries edged out a 5.9 second gap before a red flag on lap 19 of 41, as Schumacher - lying in 10th having made his compulsory pitstop early - clipped Tatiana Calderon into a spin at the same Rascasse spot where Mick's father Michael had his infamous qualifying incident in 2006.

Under F2 rules, cars were allowed to change tyres in the pitlane during the red flag but that did not count as their mandatory stop.

That meant the top eight group that had not officially pitted were able to take fresh rubber for the restart but would still have to stop again in the remainder of the race.

They were saved from the potential for being jumped by the early pitters when they stopped because everyone behind them was classified one lap down at the restart and not permitted to regain that lap under the safety car. 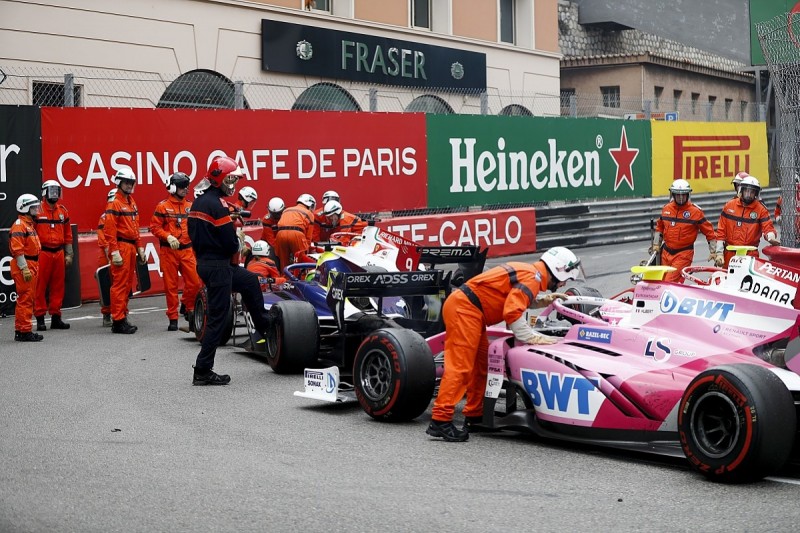 After the safety car restart, Schumacher was given a drivethrough penalty for his role in the Calderon incident, as de Vries drove away at the front chased by Ghiotto.

Ghiotto attempted the undercut during the pitstops, but clipped the barrier at the second Swimming Pool corner on his out-lap.

That cost him momentum and let de Vries leap 10s clear into a victory-ensuring position. His second consecutive race win was his first in a feature race this year and maintained his streak of being the only driver to score in every race this season.

Drama continued after the restart. Mahaveer Raghunathan - having baulked Jack Aitken in qualifying and in the race - punted Aitken off at the Fairmont hairpin with two laps to go while Juan Manuel Correa crashed out of seventh at the exit of the second Swimming Pool chicane at the same time, meaning the race ended under safety car.

Dorian Boccolacci - fighting for his F2 future - took a brilliant fifth for Campos Racing ahead of 16th-place starter Guan Yu Zhou, who benefited from the safety car to join Virtuosi team-mate Ghiotto in the top six.

Having replaced Indianapolis 500-bound Jordan King, Artem Markelov took seventh on his one off return to F2 for MP Motorsport.

Arden driver Anthoine Hubert, who ran fourth at the start but had a second poor pitstop in as many rounds, while also being involved in multiple incidents during the race, took 10th behind the battling Ralph Boschung of Trident, who secured a late deal to safeguard his F2 future before this event.

Renault F1 junior Hubert was almost hit by points leader Nicholas Latifi, who later picked up a drivethrough penalty for punting off Sean Gelael. He finished 13th, ahead of Schumacher, and is now only one point clear of de Vries in the championship.

The result could yet change further as race control is investigating infringements of the race suspension rules in the pitlane during the stoppage.