DAMS driver Latifi had pitted just before the end of the F2 practice session last Thursday in order to put on older tyres for practice starts at the end.

He had already pitted a lap later than intended, and was in a rush to get back out before the chequered flag and the pit lane exit light turning red to mark the end of the session, thus stopping drivers being able to head out for a practice start.

The 23-year-old qualified fifth for the Monaco feature race but incurred a three-place penalty for running past the red light in practice, dropping him to eighth on the grid.

Latifi believes a graduated system for F1 and F2 would be better, as he was worried that if he braked hard then any potential cars behind might have crashed into the back of him.

"One of the things I suggested in the stewards room was it should be like a traffic light where it goes yellow to give you a pre-warning, like five seconds before," Latifi told Autosport.

"If you get to the line and it turns red you're breaking the rule regardless.

"I suggested for F1 and F2 so that it doesn't happen to another driver.

"It wasn't like I saw it 50 metres before and drove through it, you can see from the onboard. 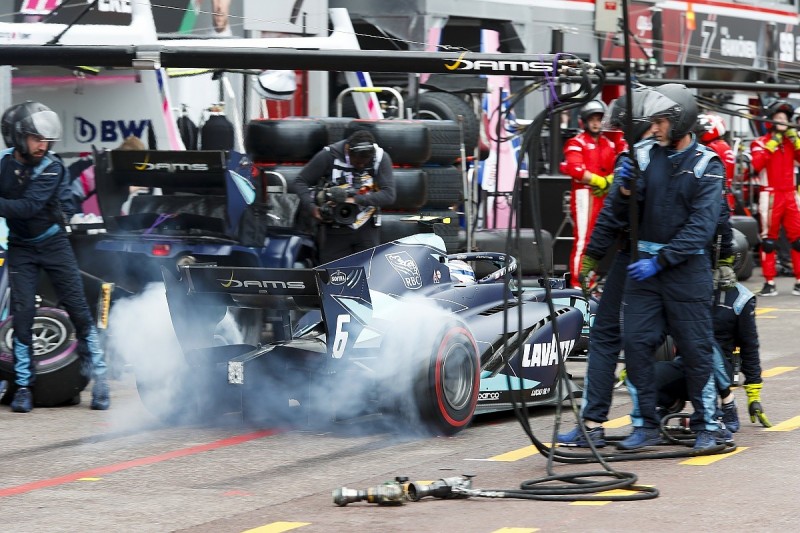 "It was very last minute. The rule is black and white and I understand, but that's why I suggested a change.

"I was looking at the light and I saw it had just turned red as I was very close.

"Even if I did try to stop I would have gone past the line, and I wasn't sure if there was anyone behind so I didn't want to jam on the brakes if there was someone behind in the same boat.

"I was at the point of no return.

"I crossed it and came on the radio straight away and said it turned off kinda straight away as I got there, I couldn't react, I still would have gone passed."

The three-race penalty dropped Latifi to eighth on the grid, and an ill-fated attempt to try an alternative strategy failed when the regulations were not followed after a red flag.

Latifi was one of a number of drivers who lost a lap after Mick Schumacher spun Tatiana Calderon into a spin blocking the track.

After the race resumed those drivers a lap down were msitakenly not allowed to unlap themselves - meaning Latifi's advantageous situation of having already made his mandatory tyre change when the top eight should have had to have pitted was lost.