Jack Aitken and Nyck de Vries had topped the session at various points with Aitken dominating; his last flier looked like the lap that would give him the chance to start at the front in Saturday's race and he then parked in the ART garage.

But Sette Camara - who has been the most consistent and unlucky driver in equal measure this season - delivered pole with just two minutes to go in his Carlin-run car.

The session was characterised by the supersoft tyres, which were good for the first flying lap and then were tricky to improve upon, placing massive pressure on the drivers to deliver on their first lap on the set. 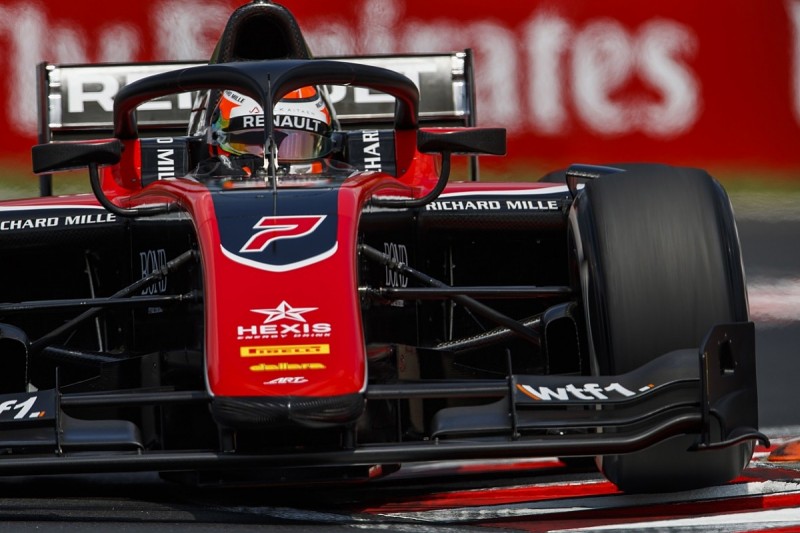 Aitken held second and was just 0.030 seconds off the pole after he had used his tyres with five minutes still to go, with de Vries third.

He was left to rue a poor first sector on his last attempt to wrest pole, and also stalled exiting the weighbridge, while he still held the fastest lap at that point.

The man on pole for the last three events, George Russell, declared over the radio: "Sorry guys, I fucked that up there."

He could only manage fourth, despite topping the earlier practice session on the medium tyres.

Luca Ghiotto was fourth in practice and followed up with a fifth in qualifying for Campos Racing, ahead of Lando Norris.

The McLaren F1 junior was on a late flier at the same time as Sette Camara, his team-mate, but he couldn't improve and will start two spots behind title rival Russell.

Artem Markelov was scrappy in practice but achieved a top seven in qualifying with his Russian Time-run car, ahead of Trident's Arjun Maini - who showed flashes of pace throughout but couldn't combine them into a scorcher.

Ralph Boschung again beat ex-F1 driver MP team-mate Roberto Merhi, repeating what he achieved in practice, with ninth ahead of Louis Deletraz. The Charouz Racing System team has sporadically struggled in qualifying and this was one of its poor ones, with Fuoco in 12th behind Nirei Fukuzumi's Arden entry.

Fukuzumi's team-mate, Maxi Gunther, won the last F2 race at Silverstone, but could only manage 15th on the grid at the Hungaroring.

Tadasuke Makino recovered from a crash at Turn 3 in practice to get out in qualifying, but brought up the rear in 20th.