On a soaking track, Nikita Mazepin spun at the Turn 6/7 chicane in the early moments of the session and stalled, bringing out a red flag almost immediately.

After that, ART Grand Prix driver de Vries and Virtuosi Racing's Ghiotto were majestic, gapping the rest of the field by more than two seconds on their first runs, as drivers explored the limits of the track.

Ghiotto pounded around attempting to usurp de Vries but could not reduce his deficit of just under a tenth.

But just after de Vries pitted with 13 minutes to go, the constantly improving Nicholas Latifi stormed to the top of the times for DAMS with a lap 0.242 seconds faster than de Vries'.

It took until the final five minutes of the session for more improvements to filter through, and after emerging from the pits de Vries set session-best times in all three sectors to move 0.769s clear of Latifi.

Ghiotto then went 0.227s slower on his first timed lap back on track, but had to settle for second behind de Vries - who was watched by the driver he succeeded at ART - Williams Formula 1 racer and reigning F2 champion George Russell.

No one else would come close to pole, as Latifi failed to best his earlier effort and remained third on the grid for Saturday's feature race.

Mick Schumacher failed to give up in the session, and secured a best qualifying position in F2 yet despite being bumped down to fourth by Ghiotto's late improvement.

The Ferrari junior and Prema driver was also the top rookie in what was the first wet session of the year.

Louis Deletraz was another driver to improve late on for Carlin, leaping ahead of Sauber Junior Team driver and Ferrari junior Callum Ilott to claim fifth.

Jack Aitken set a session-best sector on his last run but ran wide at the tricky final corner and failed to improve, and instead had to settle for seventh with Campos Racing.

Honda junior Nobuharu Matsushita took eighth despite leaping over the chicane curbs on his last effort in the second Carlin entry. 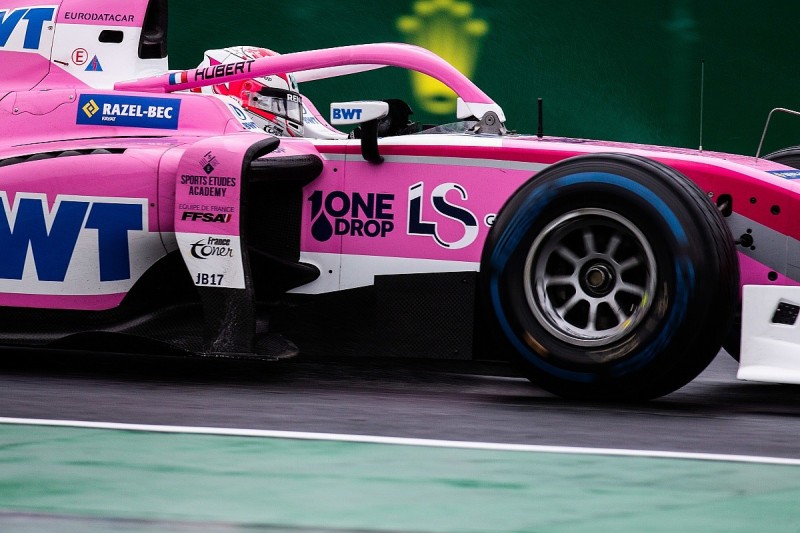 Renault Formula 1 junior Anthoine Hubert qualified ninth, but he and his Alfa Romeo-affiliated team-mate Tatiana Calderon were both excluded from qualifying after the session for a tyre infringement.

F2 stewards found one tyre on reigning GP3 champion Hubert's car was one of Calderon's nominated tyres, and Calderon in turn had one of Hubert's allocated tyres fitted.

This contravened F2 regulations, and both cars will start Saturday's feature race from the back of the grid as a result.