Formula 1's move to lower-degradation tyres in 2017 will not be emulated by its principal support series GP2, says supplier Pirelli

F1 has answered drivers' calls for more durable rubber and less focus on tyre saving and management this year, having previously requested high-degradation tyres from Pirelli.

But the Italian tyre firm says GP2 and GP3 promoter Bruno Michel has not made such a request so the high-degradation philosophy will be maintained below F1.

"Talking to the promoter, he was very happy with the racing last year, so we decided to keep the same tyre."

Asked whether the decision on levels of tyre degradation rested with the series promoter or the teams, Isola said: "In GP2 and GP3, we have a lot of meetings with the promoter, who gives us the guidelines.

"He likes degradation and, in our last conversation with him, he wants to keep the same approach.

"He is not planning for more consistent tyres; he doesn't like this.

"In future it's possible to change [if the teams demand it], but I think it would be quite difficult." 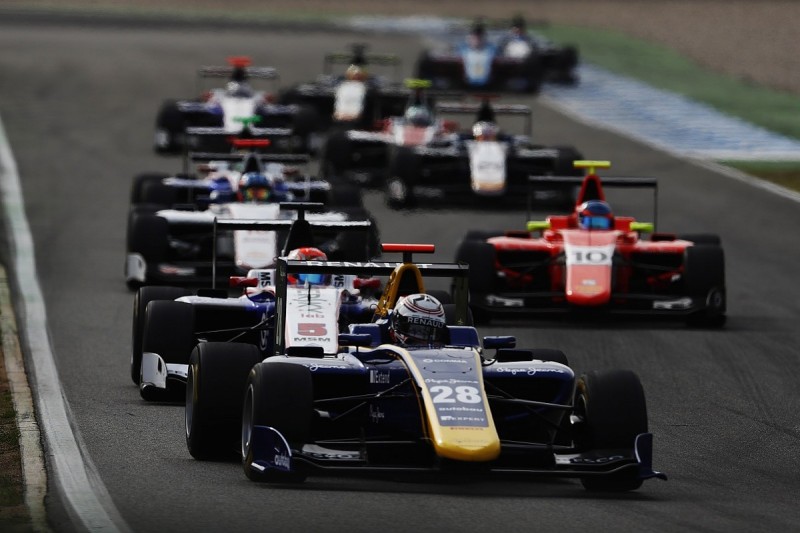 The plan for GP3 this year is to increase degradation levels rather than reduce them.

"The request from the promoter was to have a tyre with higher degradation, but especially at that the rear," Isola added.

"He wants a tyre that is more difficult to drive, to give the young drivers a bigger challenge.

"If you have more degradation at the rear, maybe you start with the balance you had [last year], but then the car is oversteering more and becomes more difficult to drive than a car with understeer."

The new tyres will be paired with the introduction of DRS to GP3 in 2017, which will be the series' second year with the Dallara GP3/16 machine.

Organisers had hoped overtaking would be easier with the new car last year, but races were initially short on action before spicing up later in the season.

Asked whether a push towards more degradation suggested Pirelli was too conservative with its GP3 tyre selections last year, Isola replied: "The problem was we had low degradation, but on some occasions a high level of wear.

"So it was not possible to go one step softer because they wouldn't have finished the race. The choice was based on the wear rather than the degradation.

"This is why the promoter told me: 'The tyre is good, but it's too good! We want more degradation'.

"So we started to work on the rear construction to create more degradation, and looking at the result of the tests it's good, we achieved that."

A new tyre will be introduced for GP2 in 2018 to coincide with the arrival of the series' new car.