Leclerc led for much of the middle phase of the Yas Marina race after using a contra-strategy of soft-to-super-soft Pirelli tyres to rise from sixth on the grid.

That strategy backfired when his super-softs degraded massively in the final laps, but the 2017 F2 champion was still comfortably clear of fellow Ferrari junior Fuoco.

Then Leclerc suddenly slowed on the run to the line and Fuoco swept by to take the final podium spot behind race winner Oliver Rowland and Artem Markelov by just 0.015s.

"I didn't have any problems [on the final lap]," Leclerc told Autosport.

"It [was] just a team order because Antonio is still playing in the championship to be the second rookie, so they asked me to let him past."

When asked if he was happy to obey the order, Leclerc replied: "I am not so happy, obviously, because in my opinion it's a bit pointless, but on the other side if it can help Antonio in some way by getting a better result in the championship I will help him because now I don't have any more to win.

"A podium would have been fine and it was quite frustrating because our race was very good - I would have loved to do a podium.

"I don't agree 100% [with] that decision but at the end it's team orders and sometimes you have you show that you can accept them also."

Fuoco had recovered to run fourth in the closing stages after overhauling McLaren F1 junior Nyck de Vries, who also attempted to make the alternative tyre strategy work for Racing Engineering before fading to sixth. 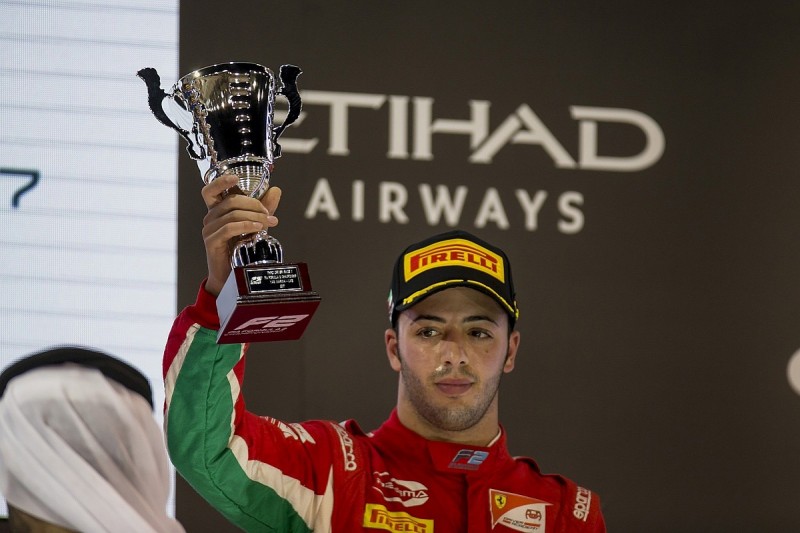 The Italian - now three points clear of de Vries in seventh in the drivers' championship heading into the final race of the season - had nearly stalled from third on the grid at the start of the race.

"I want to thank Charles for the last lap because he did a great job and played it really fair, and I also want to thank the team," Fuoco said in a Prema statement.

Leclerc "never had" such degradation before

Leclerc, who wrapped up the F2 championship in his rookie season last time out at Jerez, was lapping almost two seconds faster than Rowland early in his final stint charge following his late switch to the super-softs.

But after lighting up the timing screens on his initial out-laps his pace faded, with large chunks of rubber seen coming off his tyres in the final tours.

"On the super-softs I had such a strange thing happen - I've never had the degradation like this," Leclerc said.

"We'll look at the data just to understand because I'm curious to know what happened there.

"We don't really know where it comes from - it just felt like a puncture."