Russell had been on course for a comfortable maiden F2 win, having pulled out a five-second lead over de Vries before a crash for Roy Nissany brought out the safety car and bunched the field up with nine laps of the scheduled 29 remaining.

De Vries dived down the inside of Russell at Turn 1 after the restart, forcing Russell to move wide to avoid the Dutchman after he had locked up.

The result was that Russell plummeted out of the points, finishing 12th, while DAMS driver Alexander Albon was able to secure a maiden F2 win after passing Antonio Fuoco.

"You saw de Vries going for the overtake on the inside, which was completely stupid really, considering I was already defending," Russell told Autosport.

"It's a street circuit with no grip there. "I braked a bit deep, no doubt, but I knew there's a good run-off there and I was happy to brake deep.

"He completely misjudged it, and you saw the consequences. I'm very confident I would've made the corner if he wasn't there."

For his part, de Vries admitted he wanted victory "a bit too much" when he made the lunge on Russell.

"I was in [Russell's] slipstream, and I think I wanted [the lead] a bit too much," said McLaren F1 junior de Vries. "The tyres and brakes were not ready for it, I locked up, went straight and that was it."

After stalling on the grid in the sprint race and gaining a poor start in the feature race in Bahrain, Russell trails points leader Lando Norris by 37 points after just three races. 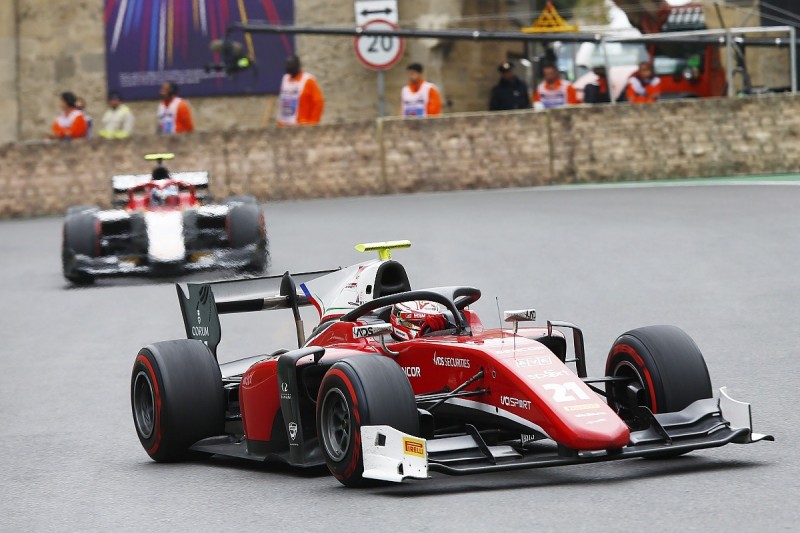 Fuoco was holding a gap over eventual winner Albon in the closing stages of the race, until plumes of smoke caused by Markelov's engine failure descended on the circuit.

"I think it cost us victory, 100%," said Fuoco, who was worried of hitting Markelov's car if it had stopped, as Fuoco was the first car on the scene.

"It was a bit of a dangerous situation because we didn't know If the car was there.

"In that case it maybe would be better to use the virtual safety car. It's OK for the guy behind because he can see me [entering the smoke]."

Albon closed the gap significantly to Fuoco during the smoky lap and later passed him for the win at Turn 1.