Oscar Piastri took another step towards the Formula 2 title after holding off Theo Pourchaire to claim victory in the feature race at Sochi.

The championship leader produced a faultless drive from pole position, only losing the lead briefly during the mandatory pit stop phase.

Piastri was hounded by rival Theo Pourchaire throughout the 28 lap affair, but the Australian held his nerve to take the chequered flag for the third time this season, with a 1.9s margin.

Pourchaire was left to settle for second while Jehan Daruvala took third from the fast starting Ralph Boschung with five laps remaining.

Piastri’s victory has further boosted his hopes of claiming a third consecutive junior formula title, following triumphs in Formula 3 and Formula Renault, after his nearest rival Guanyu Zhou could only finish sixth. Piastri now holds a 36 point lead over Zhou.

Pole-sitter Piastri made no mistakes at the start as he comfortable led the field on the run down to the first corner, while strong starts for Theo Pourchaire and Ralph Boschung saw the pair jump Jehan Daruvala into second and third respectively.

Zhou was among those to get swamped at the start as he dropped from fourth to eighth. Likewise, Liam Lawson, the first of the front runners to start on the medium tyre, slumped to 12th from eighth on the grid.

There was drama further back as Bent Viscaal spun out of the race at Turn 2 after contact from Roy Nissany, who was handed a five second penalty. Lirim Zendeli was also caught up at Turn 2, losing his front wing, which necessitated a trip to the pits.

Viscaal’s stricken Trident caused a brief virtual safety car period but once racing resumed Piastri led the way from Pourchaire and Boschung. Daruvala held fourth ahead of Robert Shwartzman with Jake Hughes sixth, but was holding up a train of cars including Juri Vips and Zhou.

The deadlock in the battle for sixth was broken when Vips developed a suspected mechanical issue which forced him out of the race. The slowing Hitech was passed by Zhou, who then overtook Hughes. 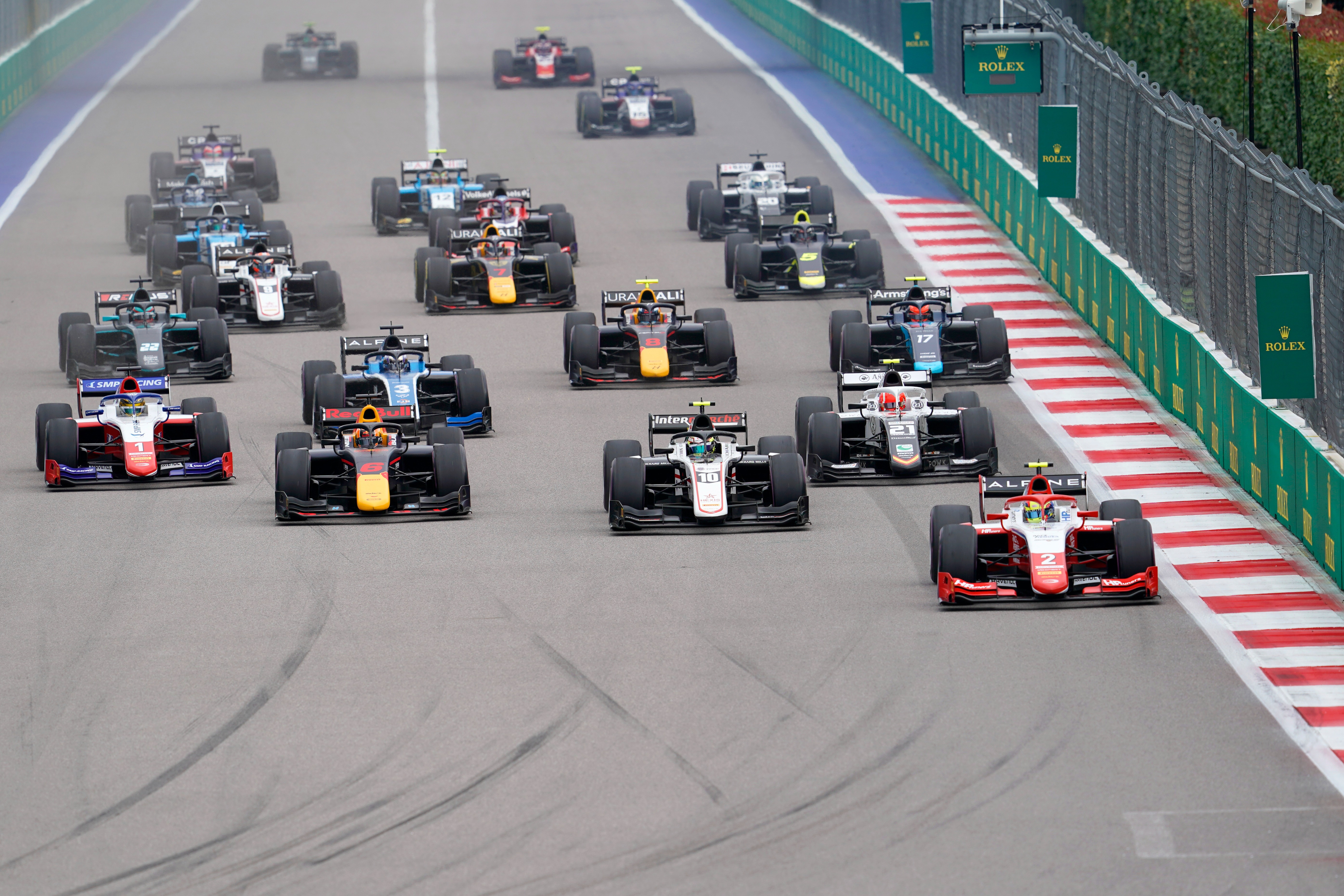 At the front, third-placed Boschung was the first of the leading group to blink and dive into the pit lane for a mandatory stop on lap 7. Leader Piastri dived in two laps later while Pourchaire stayed out for an extra lap.

Pourchaire did remerge ahead of Piastri but the championship leader made the most of his extra tyre temperature to regain the position.

However, Lawson moved to the lead of the race having opted for a longer opening stint on the medium tyres. The New Zealander held a 6s lead over Piastri when he chose to make his stop on lap 17.

Lawson’s pit stop handed the lead back to Piastri with Pourchaire in hot pursuit as the pair scythed their way through the medium tyre runners. Boschung continued to hold third once the pit stops had shaken out, while Dan Ticktum jumped Zhou to claim seventh.

Further back, Hughes’ strong run came to halt on lap 18 when he spun at Turn 15.

As Piastri and Pourchaire led the way at the front, all eyes switched to battle for third between Boschung and Daruvala. In the final laps Daruvala prevailed as Boschung dropped behind Shwartzman.

Felipe Drugovich was absent from the grid despite being cleared of injury following a hospital visit after a heavy shunt on the lap to the grid for Saturday’s sprint race.

F2 will now take a 10 week break before resuming at Saudi Arabia for the penultimate round of the season on 3-5 December.