Russell was a level above the rest in Friday morning practice, and his pole time was just 0.145 seconds slower than Charles Leclerc's the year before despite the F2 using a new, heavier car for 2018.

Russell had already done enough for pole on his penultimate lap, but improved on his final flier by 0.033s to set a time of 1m13.541s.

Norris took second - his best qualifying effort since the second round in Baku - to lock out an all-British front row, but the gap between the two still fell from 13 to nine ahead of Saturday's main race.

His final lap ended in the runoff at Turn 9, although it did not look like he would challenge Russell with that effort, with McLaren junior Norris ending the session 0.2s off Russell and fractionally ahead of Carlin team-mate Sergio Sette Camara.

Russell's ART Grand Prix stablemate Jack Aitken recovered from contact with Roy Nissany in practice, for which they were awarded a point and two penalty points respectively, to take fourth - his best qualifying of the season.

Arjun Maini rewarded his Trident team for an engine change between practice and qualifying with his best starting slot of the season, after problems were identified with the unit he used in Paul Ricard where he issued an emotional radio message in the cool down laps. 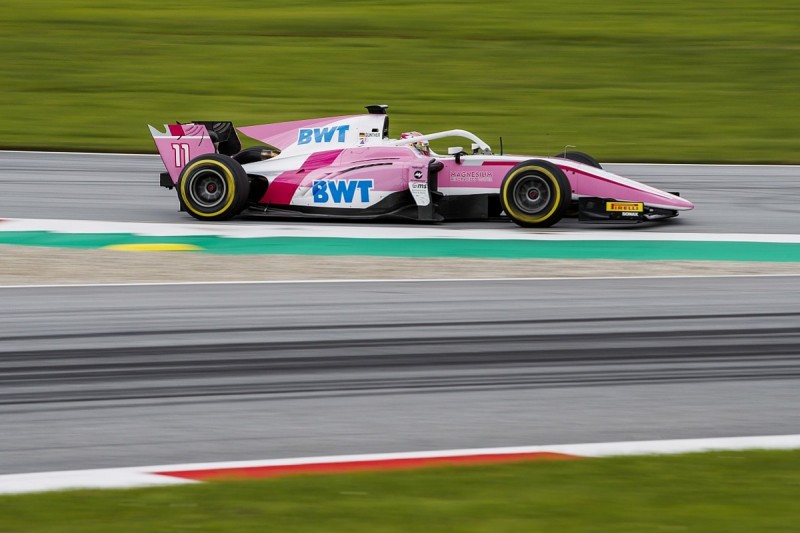 Maxi Gunther was the third driver in a row on the grid to score his best qualifying result this season in sixth for Arden, ahead of Louis Deletraz's Charouz Racing System-run car that has been on the podium at three consecutive F2 rounds.

Alexander Albon had not qualified outside of the top three so far this season, but a wide moment at Turn 4 on his first flying lap stunted his progress.

He was limited to eighth, ahead of the usually further forward Prema-run car of Nyck de Vries.

Tadasuke Makino rounded out the top 10 for Russian Time, while his team-mate Artem Markelov repeated a scrappy practice performance with an identical moment in qualifying when he was launched airborne off the Turn 9 exit kerb.

He could only manage 18th on the grid, which jeopardises his fifth place in the points standings.

He qualified ahead of birthday boy Nicholas Latifi - who was the star of last year's feature race, driving through the field to challenge eventual winner Leclerc for victory - and Nissany.